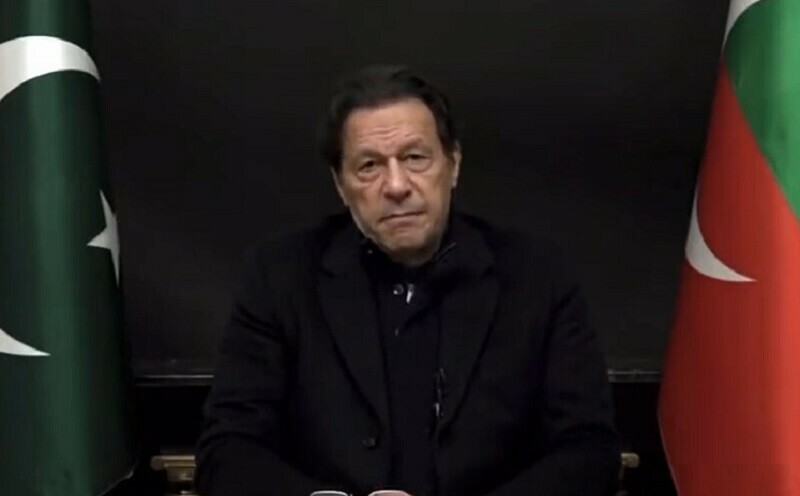 LAHORE: Chairman Pakistan Tehreek-i-Insaf (PTI) Imran Khan has accused the prime minister, interior minister and the “black sheep” in the army for plotting and executing multiple attempts to assassinate him.

Addressing via video link from his Zaman Park residence, Mr Khan urged the CJP to back a powerful inquiry team. He alleged that otherwise the plotters who were currently holding top positions, would not allow justice to be served.

The former premier is quoted as lamenting “I have no hope of justice after the hurdles being created in the functioning of the joint investigation team (JIT). What’s seriously worrying is that the defenders of the country got involved in the plot and are covering it up.”

“Since I know the perpetrators of the attack and have been talking about the whole plan in public meetings besides recording a video naming the four people responsible for the assassination plots against me, I am baffled for the last two months at the mindset that allows a country’s savior to go against its interests.”

“Since I ruled the for over 3 years, the state agencies shared that an assassination plan is brewing against me,”. IK added “only anti-Pakistan elements could hatch such a plan, not someone assigned to protect the country’s borders and interests.

Questioning the powers-that-be, Mr Khan insisted that PML-N supreme leader Nawaz Sharif, Prime Minister Shehbaz Sharif, whom he alleged was notorious for extra-judicial killings and Interior Minister Rana Sanaullah, whom he called a known killer, were the main characters of his assassination plot.

Following the JIT report, the PTI chairman posed several questions about the developments after that day.

He asked why he, despite being the head of a “federal political party” and a former premier, could not get an FIR registered? ” Who recorded the video of the suspected shooter Naveed? Further who asked the Gujrat district police officer (DPO) to send that video to “anti-PTI” journalists? Who asked the CTD to record another video late at night, release and later re-release it with a changed background ? And that why some parts of the JIT report were leaked to an “anti-PTI” anchor?

Mr Khan insisted the JIT had confirmed that suspect Naveed’s polygraph test had failed. And that the shooter was a trained who was not acting alone. He said the suspect had recorded a “scripted” statement saying he was a religious fanatic and acted alone. Additionally he further said the JIT confirmed there were three shooters. He asked again why the suspect said he was a ‘lone wolf’?

He also asked who was stopping the Gujrat DPO and a CTD official from cooperating with the JIT when both serve Punjab government.

The PTI chief also regretted that the JIT provided a mobile phone of the suspects to the forensic department. But it refused to share the details of the data, for being a federal government institution.

“Instead of helping the JIT many key persons are not cooperating at the behest of the federal government,” he claimed.

The Punjab government-led JIT reportedly found that the attack on Mr Khan was carried out from three different shooting sites.

Information Minister Marriyum Aurangzeb, in a press conference later responded that Khan had brought the economy to its knees through his “disastrous policies”. She dismissed the PTI chief’s “narrative of helplessness” as a “pack of lies”.

“The PTI chief is right as it was only one person — Imran Khan himself — who played havoc with the country. He deprived the poor of their livelihood, traded off Kashmir, took historic foreign debts, and looted the national exchequer ruthlessly.

She said, “The PTI has governments in Punjab, KP, Azad Kashmir and GB, but ironically its chairman was complaining of “helplessness”.