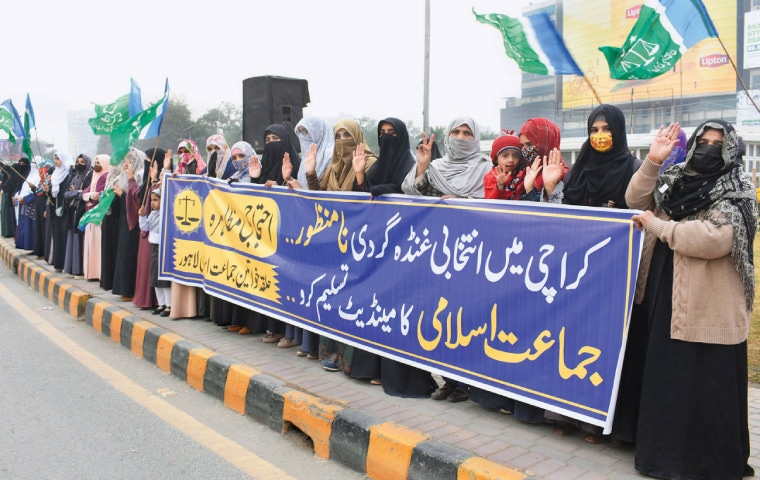 KARACHI: The poll watchdog on Wednesday issued a brief statement amid mounting pressure from the contending parties allegations regarding irregularities surrounding the Jan 15 LG polls in Karachi deepened.

The Election Commission took notice of alleged irregularities in six union councils (UCs)amid accusations by Jamaat-i-Islami emir Sirajul Haq, PTI chairman Imran Khan and a PPP claim that it had won another UC.

After hours-long protest outside the offices of returning officers (ROs) in Karachi’s three districts by the workers of opposition JI and PTI, the ECP announced that it would look into their grievances on Jan 23.

the ruling Pakistan Peoples Party (PPP) had used the resources of the Sindh government to “manipulate the results and change the original vote count”.

Initial unofficial results gave PPP 93 seats out of the 235 contested. While JI got 86 seats, PTI grabbed 40. The rest of the seats were won by smaller parties and independent candidates.

The ECP decision, however, failed to bring the political temperature down, as the new phenomena of recount on a PPP request triggered strong protest by JI and PTI. By the end of the day, the ROs had initiated vote recount in at least six UCs.

Though ECP didn’t share the outcome of any recount, PPP claimed it had won a seat in the Central district which it had earlier lost to JI.

The development fuelled tension as the opposition took to the streets against the ECP decision dubbing it a move from the ruling party to counter the protest against its “post-poll rigging”.

“My 200 votes weren’t included in the final count and the PPP candidate was declared having a lead of 37 votes,” said Wajid Khan, a JI candidate of UC-1 from Gulshan-i-Iqbal Town while protesting outside the DRO office on the University Road. “The most surprising thing is that the DRO had admitted and personally informed me about this flaw. When we resisted and protested, he admitted to having been under pressure and can’t do anything to fix this,” Wajid Khan claimed.

In Islamabad, JI chief Sirajul Haq warned all relevant authorities against testing his party’s patience. Addressing a news conference, he said: “We want our mandate back, do not try to test our patience.”

He said JI is a peaceful party but it had many options to take back its mandate.

He alleged that ROs were forced to change the results by the Sindh government. Rigging was conducted by the provincial government to show that PPP is the leading party in Karachi, he said.

Quoting figures from Form 11, Mr Haq said JI had been declared winner in 94 UCs, but results were delayed and then changed in the offices of ROs. He expressed the hope that PPP leader Asif Zardari will play his role to bring Karachi out of confusion.

“I expect Asif Zardari will issue directions to the PPP Sindh chapter to accept the JI mandate.”

“Whenever transparent elections were held in Karachi, people put their confidence in JI,” he said and mentioned names of the late Abdul Sattar Afghani who was mayor of Karachi in the mid-1980s and the late Naimtullah Khan, who became Nazim Karachi in early 2000s.

He held out the assurance that JI would restore peace and prosperity in Karachi and meet expectations of the Karachiites.

“PDM, PPP and PTI have all added to the miseries of the masses as they brought political and economic crises,” he said. Giving an example, he said PTI first announced it would never return to the assembly, creating confusion and now when it decided to do so, the NA speaker accepted resignations of PTI members. He said elections were the only way to bring the country out of the crises.

“But, electoral reforms should be made before the polls as nobody will accept the results without reforms, creating further uncertainty and chaos,” he cautioned.

In a series of tweets, PTI chief chairman Imran Khan lambasted the PPP for “rigging local governments elections” while using force, blackmail, police harassment and bribe. He added that it had also cleared why ECP, the cabal of crooks and their handlers had sabotaged the PTI’s demand of using Electronic Voting Machines (EVMs).

The former prime minister said that rigging in the LG polls explained that PPP had no commitment to free and fair elections.

“The EVMs allow for transparency and immediate results to prevent rigging and engineering of results,” he pointed out. The PTI chairman said that results of LG elections should have come out within a few hours at most but they were delayed, allowing for massive foul play.

If the ECP, the state and PDM wanted this sort of elections, the PTI chief said, the stability that elections were meant to bring would not happen. “Instead such manipulated elections will only cause more agitation, polarization and anarchy,” he added.