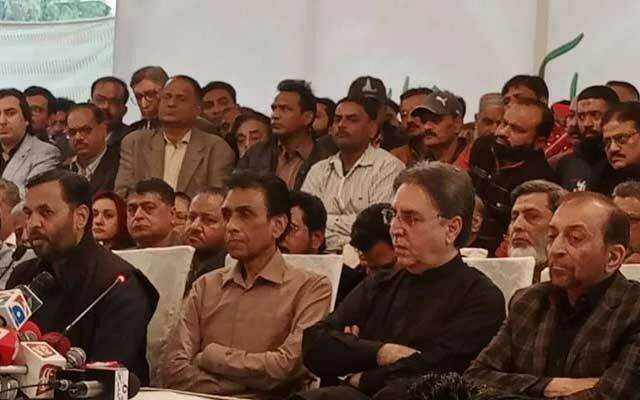 KARACHI: Although local government elections in Karachi, Hyderabad and other parts of Sindh remain smooth and peaceful largely throughout the polling day on Sunday, the polls became disputed when contesting parties accused the ruling PPP of rigging.

The contesting PTI, JI, GDA parties called out the Election Commission of Pakistan as a “helpless and silent spectator”. The PPP blamed other parties particularly the PTI as deliberately sabotaging the peaceful process.

The situation developed hours after polling ended at 5 pm with the parties alleging that the results of local government elections in Sindh were being deliberately being delayed in Karachi.

The PTI not only accused the PPP and the provincial administration of wrongdoing, but also warned of a strong reaction. Ali Haider Zaidi tweeted, “I am closely monitoring the results of each polling station, ward and UCs”.

He said his party was “coming out as the leading party in Karachi. I am also being informed about games being played behind the scenes by the dirty forces of PDM. Political engineers should respect public mandate”.

Jamaat-i-Islami leveled similar reservations and allegations. In a hurriedly held called press conference at its headquarters in the city, the JI Karachi chief, Hafiz Naeemur Rehman warned of sieging the polling stations. He said the results were deliberately being delayed “to manage things”.

He also alleged that the DC announced recounting at several polling stations without informing the figures of the first count.

In Hyderabad and rural districts of the province, the political parties of the GDA rejected the electoral process. The also demanded “immediate intervention” of the state institutions. The alliance also blamed the ECP for facilitating the ruling PPP in rigging and violation of the code of conduct.

The GDA spokesperson stated “In Badin, Matiari and Saeedabad, the PPP feudal lords have broken all records of violation and rigging”. The statement further alleged that “all this is happening under the administration and the ECP.”

“We reject this electoral process and its results. The ECP has failed to execute its primary jobs, which are fair and transparent elections.”

The PPP on the other hand accused the PTI of violating all the set rules to sabotage the peaceful process mainly in Karachi. Sindh Information Minister Sharjeel Memon accused the opposition party of “committing the worst form of terrorism amid local government polls”.

Memon further stated that “The PTI goons attacked the son of PPP leader Shahida Rahmani at one of the polling stations. He added that “the PTI should stop staging the politics of hooliganism. The PTI is not a political party and it proved it again in Karachi local bodies’ elections. They are making the process disputed after seeing devastating defeat.”

The MQM-P leaders, in a press conference at its temporary headquarters in Bahadurabad, reiterated their anger against the ECP for allegedly failing to play its due role and going beyond its constitutional mandate to allow the local body elections despite the Sindh government’s withdrawal of a notification on delimitation.

“With this turnout, these elections have already lost their moral value,” said MQM-P convenor Dr Khalid Maqbool Siddiqi. He said “it would further prove in the days to come that the MQM was right and those who contested the polls despite knowing injustice and illegal process of all this exercise would be rejected by the people of Karachi. In fact they have sold out their political future. The people of Karachi would never accept them as their local government representatives,”

Earlier, the Muttahida Qaumi Movement-Pakistan (MQM-P) which had boycotted the elections, said its narrative was successful, as the elections in Karachi and Hyderabad failed to win the people’s mandate. The party refrain to contest in the polls citing issues such as incorrect delimitation of constituencies, fake voter lists, and less count of the city’s population in the 2017 national census.