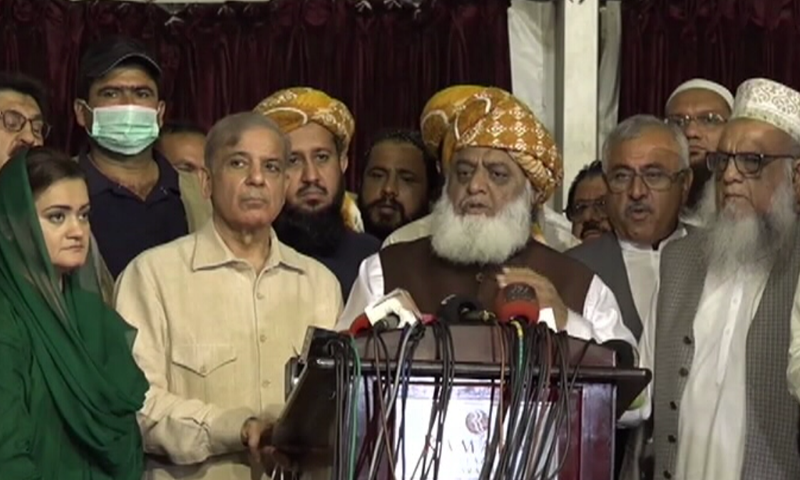 Phrases like mid-term elections and early elections have remained in currency during almost every pervious government’s term, but the reality remains that for the first time in the history of the country three successive parliaments have completed their constitutional terms and the fourth is on its way.

PML Q, Pakistan people’s Party, Pakistan Muslim league Nawaz, and now Pakistan Tehreek-e-Insaf (PTI). But which party will be the next in line after the PTI? There are wishes, hopes and plans all around.

For some political gurus, it’s now a believed fact that no party can secure individual victory or simple majority and solo flight is not a wise move anymore. The party leading the next government will depend on the support of smaller parties with healthy vote bank.

All the political players are active as election year is around a year away but all are keeping their cards close to their chests. To get some insight into what’s cooking and what’s on the menu for the election year, The Truth International (TTI) had

some informal and off-the-record discus- sions with a bunch of political brains and planners in political parties.

Rewinding a year back, in 20th September 2020, an initially successful move was witnessed to unite all opposition parties under one umbrella and an eleven-party anti-government alliance was established in PPP-led All Parties Conference.

Called Pakistan Democratic Movement, it was headed by Maulana Fazalur Rehman, the chief of his own faction of JUI, with main objective to oust Imran Khan from power. But differences soon started to emerge among coalition partners and two major parties Pakistan People’s Party and Awami National Party left the alliance after a few months.

Sources privy to all these happenings are of the view that PDM was a short-term arrangement and it could never be an electoral alliance as it actually did not the suit major parties. Also, PML-N and PPP had trust issues and both are actually election rivals, especially in Punjab, where PPP must go toe to toe against PML-N if wants to makes its presence felt in Pakistan’s largest province.

So now that the PPP has left PDM, can it become an electoral alliance? Our informa- tion confirms JUI chief Maulana Fazalur Rehman and PML-N leader Nawaz Sharif have agreed to contest the next general election collectively.

A separate line of enquiry suggests that encouraged by the Taliban’s rise to power in Afghanistan, Maulana Fazalur Rehman is looking to cobble together a coalition of religious parties in the tradition of the late lamented MMA – which could have seat adjustment with PML-N.

However, the Jamaat-e-Islami (JI) is said to have refused to join the Maulana or the PML-N in any such arrangement. Our sources close to the JI say Jamaat is intent on flying solo without regards to winning or losing.

Second important opposition alliance would be Pakistan People’s Party and Awami National Party. Bilawal Bhutto Zardari also targeting dissatisfied and ignored members of the PTI and PML-N, especially in south Punjab. The PPP is also working to establish contacts with regional and nationalist groups who have their vote bank in pockets.

We may see a new political group or party emerge from nowhere ahead of elections as PTI’s former Secretary General Jahangir Khan Tareen can also come up with his own independent group to contest elections.

JKT actually played a vital role in PTI’s rise to power in Islamabad and Lahore after the 2018 elections and has many followers and sympathizers in ruling party ranks. What is more, he could also secure support from a major political party including PPP, PMLQ, and even PML-N.

As per our information, JKT is also target- ing those candidates from southern Punjab who lost the last election by small margins. So JKT is fully in the game, with his political manoeuvrings bound to work some magic in the run up to the election.

In Sindh, an important political player Pir Pagaro is working to extend the Grand Democratic Alliance (GDA), which is allied to the PTI. Many provincial political players have been approached to join them and to give tough time to Pakistan People’s

Party who is ruling the province for consec- utive third term.

Another Government ally in Punjab, PML-Q is also trying to establish its strength specially Chaudhry Pervez Elahi who is a veteran political manager now trying to liven up his party at the grassroots level in local bodies elections keeping all his options open till next election and he is more interested in provincial assembly seats.

Another alliance may emerge in Baluch- istan from the revival of Pakistan Oppressed Nations Movement (PONM), which was previously an alliance of several nationalist parties from Baluchistan and Sindh. There is a move now to again establish alliance of parties like

Pakhtunkhwa Milli Awami Party (PKMAP), National Party, BNP-Mengal, and other to unite the divided vote and get the maximum share in seats in Baluchistan.

If present parliament completes its term like previous three, general elections has to be held before 11 October 2023, within sixty days after completion of parliamentary term, due on midnight 12 August 2023. So it’s two more years to go now and as we know last year would be the election year so actually it’s one to go before the campaigns start.

Electoral politics is always a tricky matter and political wheeling and dealing contin- ues until the last minute, so let’s wait and see who powers ahead and who is left in the dust.