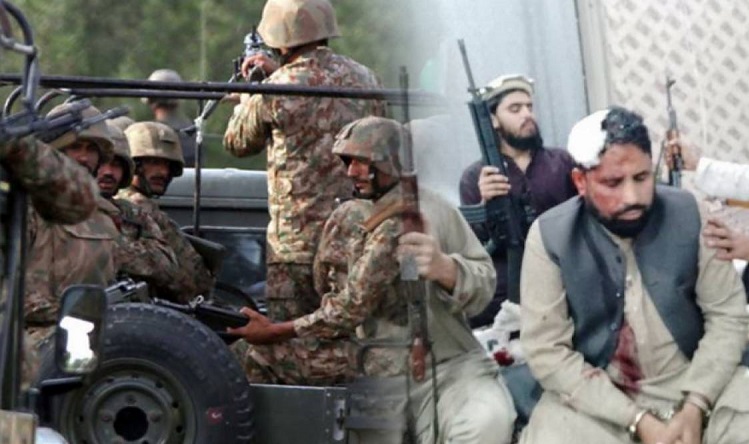 BANNU/PESHAWAR: Pakistani security forces have launched a major operation against the TTP militants who have taken control of the CTD center along with the security officials deployed there.

On Tuesday, the security officials resumed the operation as the TTP militants neither surrendered nor released the CTD officials to whom they had taken hostage. Security personnel belonging to the FC, CTD and local police have launched a joint operation against TTP militants on Tuesday noon.

In Bannu, the administration has suspended the cellphone service and also declared an emergency in the hospitals.

According to locals, sounds of bullets can be heard from inside and outside the CTD center after the security forces initiated action against TTP men.

As per media reports, TTP militants were seeking safe passage from the CTD center along with their fighters who were being interrogated at the center.

Late Sunday, the militants incarcerated in the CTD centre, took control of the building after they snatched weapons from their investigators and took a number of law enforcers hostages. They had also fired upon the security personnel, reportedly injuring a CTD man and a soldier. The militants had demanded a safe passage to Afghanistan.

In order to neutralise the situation, sources said, law enforcement agencies have decided to engage a cleric, Maulana Ahmadullah, from the Domail area of the city.

The cleric will be asked to reason with the TTP operatives who had taken CTD officials and other inmates as captives.

Meanwhile, the situation remained tense in the district bordering North Waziristan. The cantonment area where the CTD compound is located remained sealed, as police and security forces beefed up security, asking the residents to remain indoors.

The compound had also been cordoned off. “The roads leading to the cantonment area were also closed and policemen were deployed in the area,” a resident said. Another resident said that the situation was tense and fear persisted in the area. “The standoff and reports [videos of the compound] circulating on social media has aggravated our concerns,” he said.

The official source said that police had increased patrolling the area besides tightening checking of individuals and motorists on pickets. Keeping in view the volatile law and order situation, security forces also imposed a curfew on roads leading to North Waziristan and Bannu city. Meanwhile, in view of the precarious situation in the city, the deputy commissioner said all government and private educational institutions in Bannu will remain closed on Tuesday (Dec 20).

The attack on the compound has been claimed by the TTP as the banned outfit confirmed in a statement that its members had taken several CTD and security personnel hostages. In a statement, the group’s spokesperson said that in an earlier video statement, the hostage takers had demanded a safe exit but they mistakenly mentioned Afghanistan since they were not aware of ground realities. He said that the group talked to government authorities overnight and asked them to shift the prisoners to North Waziristan or South Waziristan but there was no positive response from their side.

The militants inside the seized CTD centre also released several videos earlier in the day, asking the people of Bannu, especially the ulema, to come forward and resolve the standoff between the militants and the law enforcers through dialogue.

In a video clip, a detainee declared himself ‘innocent’ and said along with the Taliban militants and officials taken hostage by the militants, several innocents were also present inside the compound.

In the video, he said that the elders and the ulema of Bannu should intervene to avoid bloodshed and settle the standstill in a peaceful manner. “The people and army are ours and the Taliban wanted to go outside [the compound] to kill people, but we stopped them,” he added. In another video clip, several armed militants could be seen roaming and taking positions inside the compound. A militant, who was not visible in the video clip, said that his “Mujahideen companions were ready”. In the video, he was heard asking them not to damage vehicles or oppress anyone in the CTD centre.

In a video released from CTD Center in Bannu, one of the individuals in the video has been identified as Commander Zarrar, who had been under custody. Zarrar had merged his group with TTP and it was still unclear what he was doing in the CTD centre even though he was in custody since January 2022.

In Peshawar, KP CM’s aide Barrister Muhammad Ali Saif said the government will not fulfil any demand put forth by the militants and asked them to lay down arms, warning them of stern action in case of non-compliance.

“There was no attack on the CTD Center from outside. Some under-custody militants snatched weapons [from investigators] and took a few police personnel hostages,” he said, claiming that the situation in Bannu was under control.

The statement further said that the militants wanted to gain the sympathy of general public by sharing videos on social media. “It is better if these people laid down arms, otherwise strict action will be taken against them,” the statement quoted the adviser as saying.

PTI Chairman Imran Khan, whose party is in power in KP, accused the federal government of failing to rein in terrorism. “Apart from running our economy to the ground, this imported government has failed to deal with the 50% increase in terrorism in Pak with incidents from Chaman to Swat to Lakki Marwat to Bannu.”

In a tweet, the former prime minister said, “They have also failed to deal with attacks from the international Pak-Afghan border by security forces of a ‘friendly’ Afghan government.”

“While our soldiers, police & local people are giving daily sacrifices with their lives, the worst part is that this increasing terrorist threat & attacks from across our Western border are finding no space in the discourse of this government of a cabal of crooks,” he added.

Meanwhile, Awami National Party (ANP) KP President Aimal Wali Khan accused the PTI-led government of deliberately attempting to weaken the police and CTD, terming it the reason why effective action could not be taken against militants.

Addressing a press conference, the ANP leader said that due to the effectiveness of CTD in Punjab, the province was witnessing fewer incidents of terrorism as compared to KP. “On one hand, the CTD was kept in a weak condition while on the other talks were started with the TTP at the behest of the PTI government and terrorists were brought to KP from Afghanistan,” he claimed. He alleged that the move of “repatriating terrorists: was aimed at protecting the PTI leadership while ousting its political rivals from the political arena through violence.