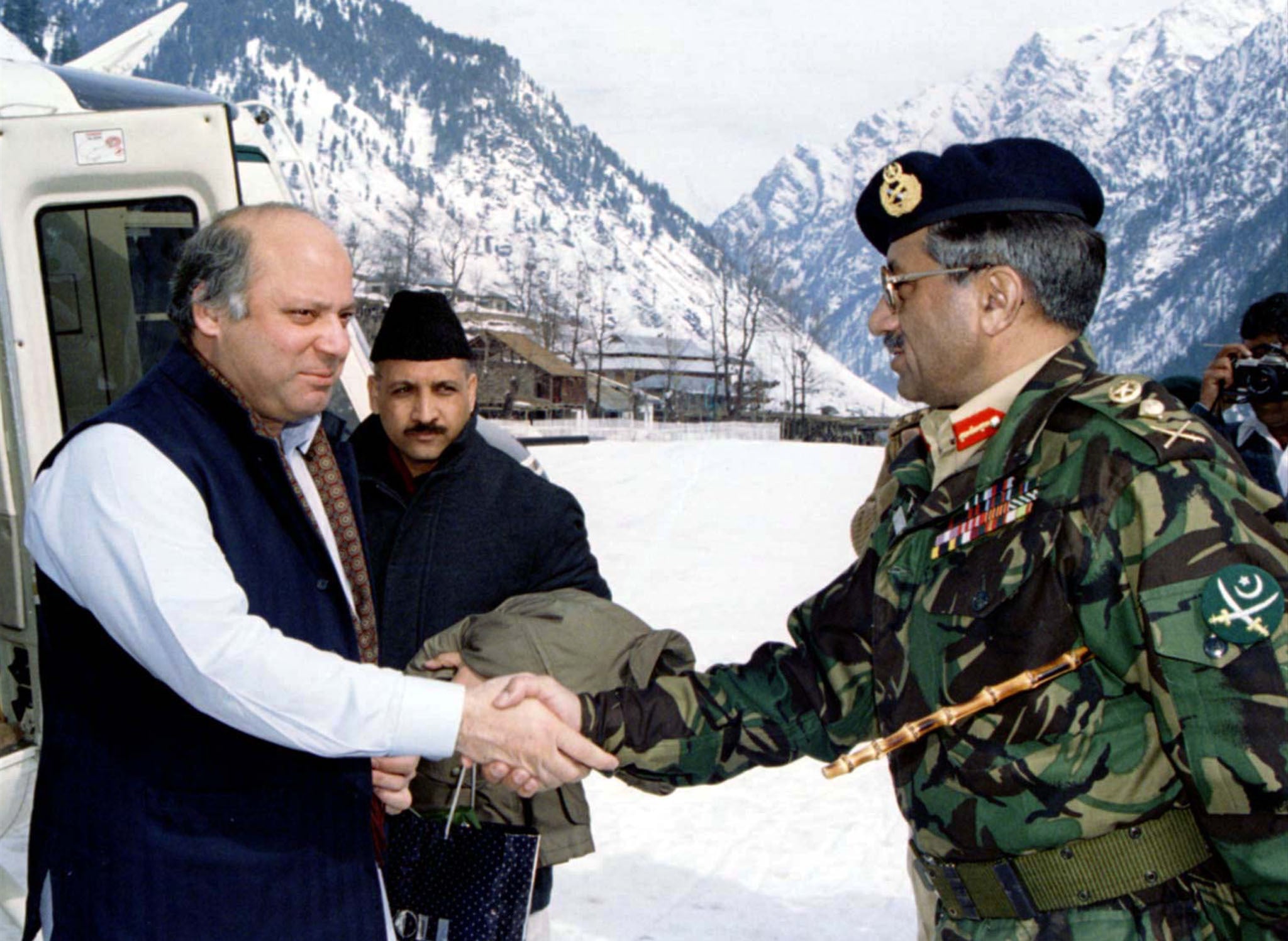 In the more than 73 years of its existence, the Pakistani polity has vacillated between military authoritarianism and party based autocracy. Both systems held elections to legitimize their hold on power. While every military dictator created a King’s party which invariably swept an election or two, the party against which coup was staged in the first place always won the post-dictatorship elections.

Exhibit A: When General Zia died in a plane crash in 1988 marking the end of his 11-year iron-fisted military rule, the PPP (Pakistan Peoples Party), the party ostracised by him, staged a huge come back, rising to power in Islamabad.

Exhibit B: After nine years of the military government under General Musharraf, when in 2008 parliamentary elections were held, two major political parties – PPP and PML-N – formed a coalition government in Islamabad after sweeping the elections and inflict- ing a humiliating defeat on King’s party, PML-Q.

Both Zia and Musharraf regimes put together Kings’ parties with help from Punjabi, Sindhi and Balochi electable, feudal and tribal chiefs and a range of crony capitalists who joined hands with the military governments in an effort to defeat populist forces like PPP and PMLN.

On both occasions, these electable switched sides in the nick of time, when the demise of military government became too obvious and joined hands with the populist forces by securing party tickets for parliamentary elections.

This endless cycle that keeps repeating itself again and again in Pakistan’s political system. The feudal, tribal Sardars and local influential join hands with the military at the time of ouster of populist governments and when the time of the demise of military governments come near they again shift their allegiance back to the populist parties, swelling their ranks again.

In April 2017, at the time of ouster of another populist Prime Minister, Nawaz Sharif – through non-parliamentary means (through a court ruling to be precise) – there was widespread speculation that his party, PMLN will disintegrate into many factions.

This didn’t happen for two reasons: Firstly, the military did not go all out to get Nawaz Sharif and force his party to shift allegiance towards any newly constructed King’s party. And secondly, despite clear signs that State machinery had chased the latter out of power, the developments in the wake of Supreme Court verdict didn’t cause any dent in the popularity of Nawaz Sharif.

After a passage of three years and many half-hearted attempts to force PMLN to disintegrate, Nawaz Sharif’s hold on his party structure remained firm.

But political pundits in Islamabad are pointing out that the time of feudal, tribal chiefs, crony capitalists and local influence to shift allegiance from Nawaz Sharif’s party towards some political entity – about to be formed – which would be more pliant towards the government and military establishment has arrived. Nawaz Sharif has crossed all lines in his aggressiveness towards the military and its leadership and he has to pay the price.

In olden times, some thinking political leader once opined that the last battle for the emancipation of Pakistan’s political system will be fought and led by Punjabi leadership. At the time, mainstream wisdom considered it impossible for Punjab to throw up such leadership.

Now, however, some political pundits are saying the prophecy has come true – a thrice-elected time prime minister and admittedly the most popular leader from the Punjabi heartland, Nawaz Sharif is mounting a campaign against those who have brought “this mad man” (a reference to Prime Minister Imran Khan) to power.

Nawaz Sharif has repeatedly clarified that his battle is not against Imran Khan but against those “who installed him in Islamabad” – an obvious reference to the military top brass. So, is this indeed the proverbial last battle of which the sage referenced above spoke?

A cursory look at the country’s history reveals that the military and central bureaucracy’s stranglehold of power structures has always been challenged by political leaders from the smaller provinces. Baloch nationalists challenged it in the 1970s, Sindhi nationalists, especially those popular with a rural support base, challenged it in the 1980s. Those from urban Sindh got into a fight with the military in the 1990s and Pashtun nationalists remained active in anti-establishment politics in a low key manner throughout this period.

But none succeeded. One potent reason for their failure was that they always failed to mobilize Punjab.

Smaller traders and lower and middle classes in Punjabi cities mobilized against Zulfikar Ali Bhutto’s government in 1977 but the upheaval was used by General Zia-ul-Haq to stage a coup and grab power.

In the intervening period, Punjab did mobilize for religious causes but quite paradoxically recognized only two popular leaders in electoral contests – Benazir Bhutto and Nawaz Sharif. Benazir Bhutto started losing her standing in Punjabi heartland after the 1996 dismissal of her government when she became a vocal and potent voice against the military’s dominance of the nation’s power structures.

Nawaz Sharif’s rise as an electoral success in Punjabi politics has remained uninterrupted since the 1980s. But he has never tested Punjabi waters as far as his capacity to mobilize Punjabi middle classes – his main power base – for agitation politics.

At the conceptual level, Nawaz Sharif’s idea of launching a protest movement in the Pakistani heartland of Punjab against the military establishment is problematic for two reasons. Firstly, Nawaz Sharif will be testing his popularity in a geographical area where the military and its top brass has traditionally held sway over the public opinion.

The public opinion as reflected in the media and in the streets of Punjab tends to be jingoistic in nature and content and generally paints the military in the light of a national saviour. The establishment has painstakingly cultivated these public opinions with the help of a vast propaganda machine that shows the military as a source of the country’s strength and stability.

In this situation, Nawaz Sharif seems to be banking on the disillusionment of the Punjabi middle classes with the existing political arrangement that has increased their economic hardships manifold during the past two years. Prices of essential goods are running amok and unemployment is rampant and as many businessmen in this part of the country are saying, the economy is in a state of recession.

In this situation, Nawaz Sharif doesn’t need to ensure that each one of his followers believes what he believes. He only has to assemble thousands and thousands of them and deliver an anti-establishment speech in front of them.

Carefully drafted official speeches aside, the stories of the government’s achievements are failing to find takers among the middle classes of Punjab who are meanwhile being laid off by the hundreds.

Nawaz Sharif, therefore, has a relatively easy task ahead of him. A disgruntled political leader finds easy partners among middle classes, which are fast shrinking in strength and financial capacity.

However, Nawaz Sharif’s clarion call for democracy is problematic from another perspective. Suppose Nawaz Sharif succeeds in bringing thousands and thousands of his supporters to D Chowk in January, as he plans to do in coming months. What then?

Governments do not fall spontaneously as a result of hundreds of thousands of people gather in front of their offices. Governments fall as a result of some powerful intervention. Traditionally this has been the model in Pakistani politics in the recent past: Either the Supreme Court – in case of Yousuf Raza Gilani and Nawaz Sharif or the military and intelligence services – in case of Nawaz Sharif only – intervened to send the government packing.

So will Nawaz Sharif demand some kind of intervention when his protest movement reaches maturity? If he does, it will be a total reversal of his stance. If Imran Khan’s government falls as a result of some kind of intervention, will it not cause embarrassment to Nawaz Sharif – who is ostensibly advocating for stabilization of democratic institutions?

Confrontation and disruption of public life has in the past led to military intervention in the country. But more than intervention this protest movement will raise the question of integrity and unity of institutional structures of the Pakistani state. Already in the past six months there have been sensational rumours about a power struggle in Islamabad.

Not to forget, this will be an agitation movement against the establishment launched from the heart of Punjab – the fortress of the establishment. If Nawaz Sharif succeeds in mobilizing lower and middle classes of Central and Northern Punjab, we are in for turbulent times.