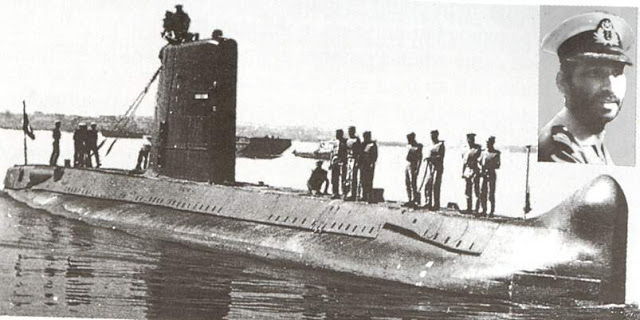 9th December 1971 would haunt the Indian Navy forever; and would remain in the annals of Naval Warfare history. On this day in 1971 the Pak Navy Submarine (PNSM) HANGOR struck terror in the hearts and minds of the Indians. Sinking Indian Navy’s anti-submarine frigate INS KHUKRI with its crew and crippling INS KIRPAN during the historic military saga of 1971.

PNSM HANGOR nicknamed “The Shark” a Daphne class French submarine that bravely undertook a range of brave operations in vast oceans for Pakistan Navy from 1970 to 2006. A diesel-electric submarine did what a modern-day submarine would dream of -targeting enemy ships and laying them to the bottom of sea. The submarine earned renown for its valour & acclaiming a kill after WW-II in the 1971 Indo Pak War, when it sank the Indian Navy’s anti-submarine frigate INS KHUKRI with two torpedoes.

The spectacular war action took place 30 miles South East off ‘Diu Head’. KHUKRI sank merely in two minutes with its crew of 18 officers and 176 sailors onboard. This PN action remains the most costly wartime casualty of Indian Navy. After this valour action by Pakistan Navy, entire Indian Western Fleet was tasked for a vigorous hunt of the valiant submarine for the next 96 hours. Indian Navy consumed around 156 underwater charges indiscriminately dropped along all possible escape routes of HANGOR; of those few were close calls but HANGOR escaped due to the operational skills of the submarine crew. The submarine remained submerged for a week and skillfully evaded its pursuers and proudly returned to Karachi unharmed; triumphantly with national glory and Naval pride entered harbor on 18 December 1971.

Indian Navy Vice Admiral (r) G M Hiranandani while commenting on the HANGOR attack in an issue of the Indian Defence Review much lauded the efficiency of the attack. The Frontier Post epitomized the action in these words “Both the attack on an anti-submarine frigate in shallow waters and its subsequent escape unharmed speaks volumes for the professional skill, courage and patience of the crew of the submarine”

HANGOR action was not mere firing of torpedoes and sinking a ship. Strategic significance of HANGOR action was manifold. It not only demonstrated Pakistan Navy’s operational superiority in subsurface warfare but its strategic gains for the nation were even more pivotal. The sinking of KHUKRI forced Indian government and Indian Navy to cancel its ‘Operation TRIUMPH’, the planned third missile attack on Karachi port installation, Naval and marine fleet which was planned on 10 December. It was KHUKRI sinking that thereafter no further missile or other attacks could be carried out by the India on Pakistan’s maritime assets at Karachi Harbor. Karachi Port being the backbone of national economy, trade hub and being a strategic vital area of the country was kept safe by HANGOR easing out our defense efforts averting material losses and keeping the port intact.

In recognition of the courageous and bold action, the valiant crew of HANGOR was decorated with 04 x Sitara-e-Jurat, 06 x Tamgha-e-Jurat and 14 x lmtiazi -Asnad. It is also a matter of pride that many of her crew members over the course of time later ascended to senior ranks in Pakistan Navy. Her wartime Commanding Officer, then Commander Ahmad Tasnim was awarded Sitara-e-Jurat and Bar, he later retired as a vice admiral. The executive officer of S/M Lt. Commander A. U. Khan was awarded Sitara-e-Jurat and rose to Vice Admiral, her Electrical Officer Lt. Cdr R. A Qadri received Sitara-e-Jurat and retired as a Rear Admiral, Lieutenant Fasih Bokhari, the Navigating Officer of HANGOR rose to become a four star Admiral and was Chief of the Naval Staff during 1997-1999.

Submarine HANGOR served PN for 35 years (1970 to 2006), and is today proudly on display as a relic-artefact at the Pakistan Maritime Museum; to remind all and sundry of her ‘Glorious Past’.