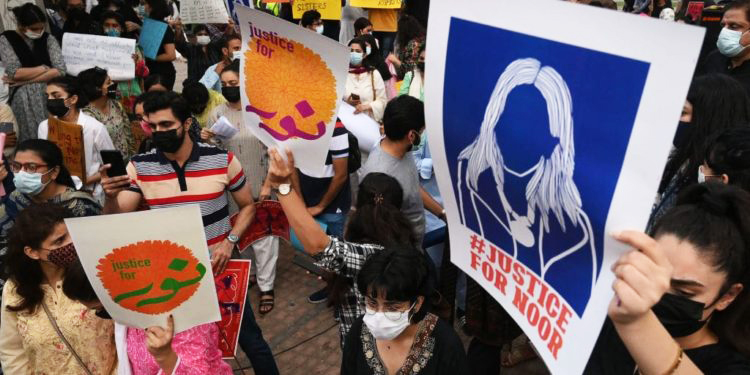 While the federal capital was already shocked after the revelation of a video footage of harassment of a couple by a gang of scoundrels, beheading of a 27 years daughter of an ex-diplomat by a son of leading businessman in a posh sector traumatize the society.

The case related to the harassment of a couple in a rented flat of Sector E-11 of Islamabad emerged earlier this month. However, on 20 July the police registered a First Information Report (FIR) of gruesome murder of Noor Mukadam, daughter of ex Ambassador Shaukat Ali Mukadam as her ex friend took her hostage and tortured her before beheading her in his home at Sector F-7.

A senior official who investigated high profile cases termed this gruesome case as of unchecked usage of drugs particularly the lethal ICE in Islamabad.

According to him, the initial information suggests the killer has a history of violence and on ICE, and has been treated for it. His family is influential and will probably use his illness as an excuse to reduce charges from murder with intent 302 to murder without intent.

The couple harassment case is registered against some 14 suspects, seven of whom have been apprehended and sent to Adiala Jail. Although these are the two different incidents, both the cases reflect irrational behaviour and a typical mindset.

ICE is wreaking havoc in Islamabad and nobody seems bothered. There are rings and chains targeting single women, divorcees, free and independent women. These rings rent flats or bungalows in posh areas, invite their female friends, put them on ICE, and then the victim is morally, physically, mentally, and financially abused till her dreadful end.

The gang used similar strategy to harass the couple and extorting money from them. The victim Asad invited his Lahore based friend Emaan. He arranged a rented house for stay in E-11 for couple of days since local property dealers offer furnished flats on daily rent ranging from PKR 4000 to PKR 5000 per day.

However, while the couple was in the flat, the 14 member gang entered into the flat, since they had another key of the doors and then they manhandled and sexually abused the couple.

It is said that they were in habit of committing such crimes and making footages of the couple in order to blackmail them and to extort money from them. After filming the couple the accused were collecting extortion from victim’s home at regular intervals.

The insiders said that accused shared the video within their hardcore group. However, last month, the principal accused Uman Mirza had some dispute with a group member over a business deal. Mirza lodged an FIR against his estranged friend. In retaliation, the friend leaked the video to another person who uploaded it to social media.

The video shocked the society and even the Prime Minister Imran Khan summoned the Inspector General of Islamabad Police Qazi Jamil ur Rehman and directed him to utilize all resources to prosecute the accused persons.

Though the police is prosecuting the accused persons, there are some legal issues involved in both these cases. According to a legal expert, the case for harassment of couple may be registered under the Prevention of Electronic Crimes Act (PECA) since making

video footage, preserving it in the laptop, sharing in the group and uploading in the social media are all offences falling within the ambit of cybercrime laws.

It is likely that sooner or later, one or more sections of PECA may be invoked in this case. Then the jurisdiction of the matter would be changed since the government has established special courts to try the suspects involved in cybercrime.

Hassan Javed Shorish, the lawyer of the victim couple also believes that because of electronic evidence, this case may eventually be transferred to PECA court. In such a scenario, not only the court would change, but the case will be transferred to the Federal Investigation Agency (FIA) the FIA’s prosecution will pursue this in a PECA court.

According to the FIR registered in this case on 6 July, the police had applied section 341 (punishment for wrongful restraint); 354 A (assault or use of criminal force to woman and stripping her of her clothes); 506(ii) (criminal intimidation); 509 (word, gesture or act intended to insult the modes- ty of a woman); 375-A and 375-D (rape), which entail death sentence or imprison- ment of not less than 10 years or more than 25 years or imprisonment for the remainder period of his natural life and fine; 338 (punishment of extortion), which has three years’ imprisonment, a fine or both, 342 (punishment for wrongful confinement) punishable with a year’s imprisonment and a fine of Rs 3,000; 395 (dacoity) to get imprisonment for life or rigorous imprison- ment for 10 years and a fine; 396-A (entic-

ing or taking away or detaining with criminal intent a woman) under which the convict could be jailed for up to seven years and is liable to a fine; and 377-B (sexual abuse), punishable with imprisonment of up to seven years along with a fine.

However, in Noor Mukadam case, the investigation is revolving around determining as to whether this was the intentional and planned murder or the suspect who may be a psychopath or a mentally ill person beheaded his friend unintentionally.

The intended or unintended murder has altogether different punishment, from capital punishment to a few years’ imprisonment, the latter part would make the suspect to go for out of court settlement with the aggrieved family.

According to the preliminary investigation, the alleged killer used a knuckleduster to torture the victim before he beheaded her. Shah Khawar, counsel of Mr Mukadam said that in such cases several tactics are used to compel the complainant for out of court settlement.

He said that the police in this case did not invoke Section 311 of the Pakistan Penal Code (PPC) since this was a gruesome murder. The First Information Report (FIR) was registered under Section 302 of the PPC which is a compoundable offence and could be settled under a compromise, he said, adding that Section 311 is related to Fisad-fil-Arz and it made the offence as non-compoundable, hence the matter could not be settled out of court.

Mr Mukadam, however, dispelled the impression that he is going for an out of court settlement saying that nobody offered him for any compromise so far and “he will not accept this at any cost.”

The investigation officer informed the local court when he produced the suspect to obtain physical remand that the police has taken the accused into custody and recovered a pistol, a knife, and a knuckleduster from the custody of the accused.

He said that the clothes of deceased and blood samples have also been obtained from the crime scene, moreover, the statements of the witnesses have also been recorded under section 161 of the criminal procedure code (CrPC).

According to the FIR lodged on 19 July, the complainant and his wife had been away separately for errands. He said when they returned home, their daughter was not there, adding that his wife tried to contact her on her mobile phone but it was switched off. Later, Noor called herself and told them that she was going to Lahore with her friends and would return in a day or two and that they should not worry, Mr Mukad- am said in the FIR. On 20 July, he received a call in the afternoon from the accused who told him that Noor was not with him, the FIR said, adding that at around 10 pm the complainant was informed by Kohsar police his daughter had been murdered and to come to the police station.