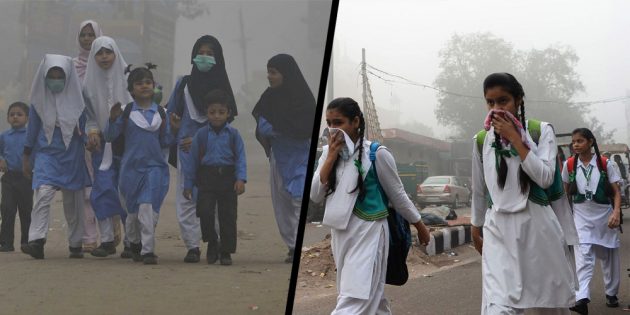 The Punjab government ordered on Monday the closure of all private offices and educational institutions in Lahore on Mondays, in addition to the weekly holidays observed on Saturdays and Sundays till January 15.

The directive, issued by Punjab Relief Commissioner Babar Hayat Tarar, is hoped to act “as a preventive and speedy remedy” to ensure “public safety, conserve lives and preempt and mitigate imminent threat of smog in the province of Punjab”, states the order, a copy of which is available with media.

The order, applicable within the territorial limits of the Lahore Metropolitan Corporation also cites evidence of “persistent deterioration in Air Quality Index of the city of Lahore, fluctuating from satisfactory to poor levels, which is likely to cause breathing discomfort, respiratory tract diseases and heart diseases” as a major reasons behind the decision.

The move comes days after Lahore topped the list of cities with the most polluted air in the world after air quality levels turned hazardous.

Smog occurs when smoke mixes with fog. While air pollution is a persistent issue in most urban centres in Pakistan, every October and November contaminates in the air in Punjab shoot up as farmers burn rice stalks or stubble left behind after harvesting to clear their fields to plant wheat.

During these cooler months, Lahore, which is surrounded by rice-growing districts, is covered with thick smog.

Last week, the Lahore High Court (LHC) had ordered the Punjab government to issue a notification directing private offices in Lahore to halve staff attendance in an effort to tackle smog.

Justice Shahid Karim issued the directives while hearing a set of petitions on the provincial government’s failure to appropriately deal with environmental issues.

During the hearing, the Judicial Water and Environmental Commission recommended closing down schools in smoggy areas. However, the court did not agree.

Justice Karim directed the provincial government to set up a smog cell at the offices of Punjab Disaster Management Authority (PDMA). The court also sought a traffic plan and directed authorities to set up an emergency helpline that citizens could call to complain about traffic issues.

According to the smog emergency plan submitted by the commission, stubble burning will be monitored by the PDMA on a daily basis and a thermal anomalies map will be shared with the district administration and agriculture department.

“The chairman of the commission […] issued a direction that if the Air Quality Index (AQI) of a particular area exceeds 400 AQI, a notice shall be issued through the education department for the closure of the respective schools or to conduct online classes as the case may be,” the report said.

AQI is a metric used by governments to inform the public about the quality of air. The higher the AQI value, the greater the level of air pollution and the greater the health hazard. AQI values at or below 100 are generally thought of as satisfactory. Anything above that is considered unhealthy.

“It is being directed by the chairman of the commission that if the AQI for a particular area reaches 500AQI, then all the activities being committing by the respective industries shall be shut down. The traffic volume of the area having high AQI will be reduced to 50pc using the technique of odd and even numbers which in turn shall be enforced by the local police and traffic police,” the report said.

The report also noted that according to the Environment Protection Agency, 4,761 brick kilns were inspected across the province and fined Rs35.9 million. Further, 797 cases were registered, 22 people were arrested and 274 kilns were sealed.

It said that the transport department had inspected 3,075 vehicles and issued warnings to 324 while 921 were challaned for emitting smoke.