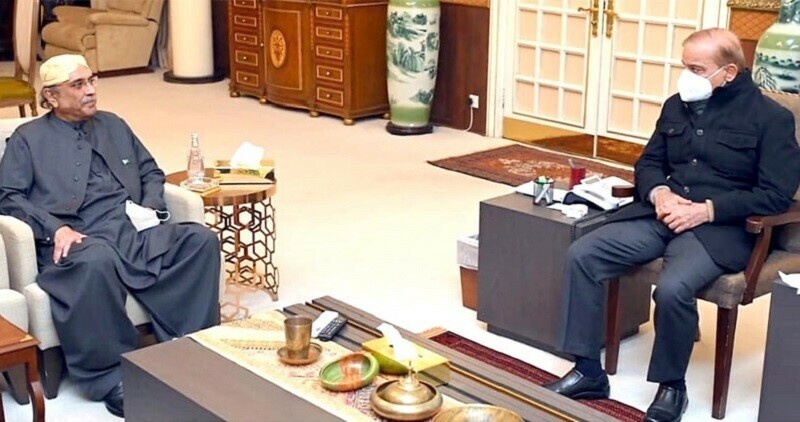 According to the Prime Minister Office the PM first met former president Asif Ali Zardari. The two leaders discussed the overall situation in the country.

A source in the PPP said the meeting focused on current political situation, economy and elections in Punjab and Khyber Pakhtunkhwa.

During his visit to the Lahore, PM Sharif also met one-on-one with the newly appointed caretaker Chief Minister Mohsin Naqvi. The premier urged him to maintain law and order and keep prices of essential items stable in the market.

The source said it has yet to be decided whether parties in the ruling alliance — Pakistan Democratic Movement (PDM) — will contest elections in the two provinces, which according to the Constitution, will have to be held within three months after dissolution of assemblies.

The recent postings and transfers in Punjab after the caretaker chief minister assumed charge of his office also came under discussion.

Punjab Assembly was dissolved  on Jan 14, followed by the provincial assembly of KP on Jan 18 on the direction of PTI Chairman Imran Khan in an attempt by the party to pressurize the ruling coalition in the center to hold early election.

meeting with the UAE Dignitary

During their interaction, the prime minister recalled his recent visit to the UAE and emphasised that both countries would work on the understandings reached between the two leaders during that visit.

Separately, the PM also received the ruler of UAE upon his arrival on a private visit to Pakistan.

Sheikh Mohamed bin Zayed Al Nahyan, who arrived in Pakistan on a private visit, said the brotherly relations between the two countries went back many decades and his father, who had immense love for Pakistan and its people, laid the foundation of their bilateral ties.

The UAE president said that he considered Pakistan as his second home and assured the premier that the UAE would always stand by the country.