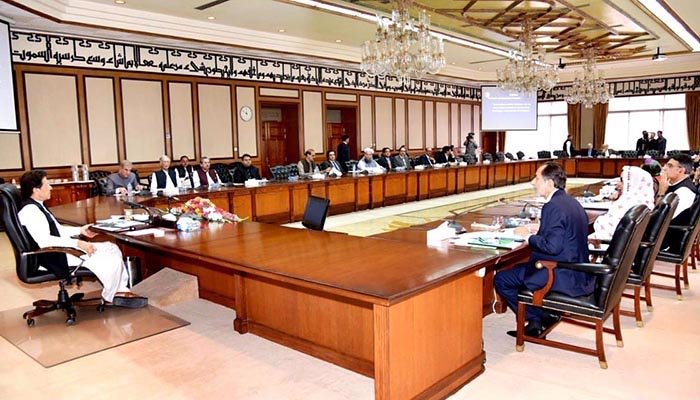 ISLAMABAD: Prime Minister Imran Khan on Tuesday informed the federal cabinet that he had told Chief of the Army Staff (COAS) Gen Qamar Javed Bajwa that he wanted Lt Gen Faiz Hameed to continue as Inter-Services Intelligence (ISI) director general for some time due to the critical situation in neighbouring Afghanistan.

The meeting was also confirmed by Information Minister Fawad Chaudhry during his presser after the cabinet meeting, stating that the issue of appointment of new ISI DG Lt Gen Nadeem Ahmed Anjum had been resolved and that the PM enjoyed the authority to appoint the chief of the country’s premier spy agency in accordance with law and Constitution.

Also sharing details of the meeting, PM’s aide on political affairs Amir Dogar said the premier wanted Lt Gen Hameed to stay as DG ISI in view of the situation in Afghanistan, adding that PM Khan and Gen Bajwa enjoyed relation of respect and dignity.

Mr Khan was of the opinion that the government wanted to take all institutions on board, Mr Dogar said. “The body language of the prime minister was quite positive and he seemed confident,” he added.

Asked what the constitutional and legal procedure was to appoint DG ISI, Mr Dogar explained that a summary had to be sent to the prime minister with three names out of which he selected one probable whom he deemed fit for the office. However, he said he did not know whether the summary would be issued by the relevant office by Wednesday (today) or not.

Reports about lack of consensus between the civil and military leadership over the matter had been making rounds on social media for the last few days but after it appeared on regular media on Tuesday, Information Minister Fawad Chaudhry was compelled to clarify the government’s point of view.

“The prime minister has the authority to appoint the DG ISI and he held a detailed meeting with Chief of the Army Staff Gen Qamar Javed Bajwa in this regard,” Mr Chaudhry told the press conference. “The federal government will follow a legal and constitutional procedure on the appointment of the Inter-Services Intelligence director general,” he said.

The minister categorically stated there would be no step taken from the PM Office or the military setup that damaged the repute of one another.

Referring to rumours circulating about the matter, the minister said: “I see on social media, there are many who have wishes; I want to tell them that the Prime Minister’s Office will never undermine the respect of the Pakistan Army and army chief. And the COAS and the army will never take any step that will undermine the respect of Pakistan’s prime minister or civil setup.”

He stressed that both the prime minister and the military leadership were in close coordination, and the DG ISI would be appointed after fulfilling all legal requirements. “Both (PM Khan and Gen Bajwa) are in agreement over this and the prime minister has the authority over it,” he added.

Mr Chaudhry also appreciated the media for not “sensationalising” the matter of DG ISI’s appointment.

Asked if his latest remarks indicated that last week’s announcement about Lt Gen Anjum’s appointment was made “without the prime minister’s approval”, the minister replied: “I have already answered this.”

At the moment, no notification has been issued for the appointment of the incoming ISI chief.

When Dawn asked him what had compelled him to say that the government would appoint DG ISI according to the Constitution and law, Mr Chaudhry replied: “Confusion created by the media, especially social media, had forced him to respond on the matter.”

“I cannot comment further on the issue; just rely on my statement in the press conference,” he added.

The minister said there was close liaison between Pakistan’s military and political leadership, terming their relation ideal. “The legal procedure will be followed in the appointment of the new DG ISI, for which both (Gen Bajwa and Prime Minister Khan) are in agreement,” he added.

According to experts in defence matters, the procedure for the appointment of the ISI director general is neither mentioned in the Constitution nor the Army Act, and all past appointments were made as per traditions under which the army chief proposes three names to the prime minister who then makes the final decision.

However, despite the passage of days following the ISPR announcements, a notification confirming Lt Gen Anjum’s appointment as the new DG ISI was not issued by the Prime Minister’s Office, leading to feverish speculation in the federal capital.

The government remained tight-lipped on the issue and finally broke its silence following a lengthy meeting between the prime minister and army chief.

Mr Chaudhry told the presser that PM Khan and the army chief had a “long sitting” last night to discuss the matter after which the premier took the cabinet into confidence on the issue.

On Monday when Interior Minister Sheikh Rashid Ahmed was asked at a media interaction about the issue, he had uncharacteristically refused to give a clear answer and said the information minister was authorised to speak on “civil-military” issues.

Meanwhile, reports that were circulating on social media claimed that the prime minister asserted in the cabinet meeting that a summary with names of probables should be sent to him for the appointment of ISI chief and it was his prerogative to select any of the three as DG ISI.