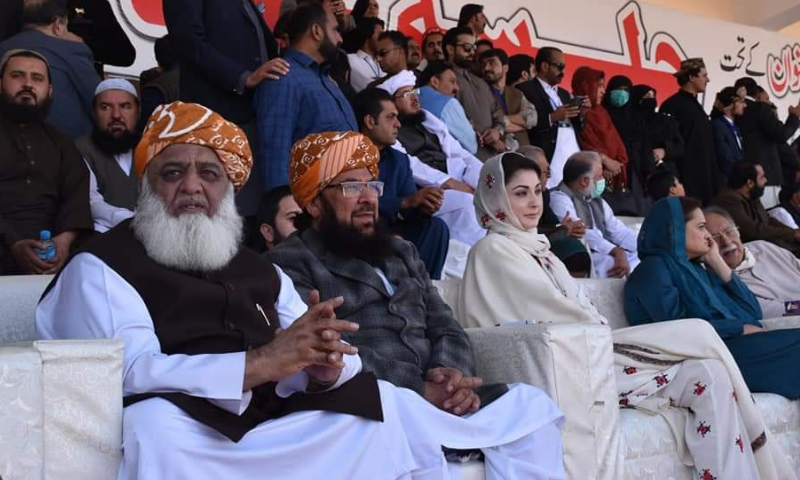 ISLAMABAD: The Pakistan Democratic Movement (PDM), an alliance of some opposition parties has decided to launch a countrywide anti-government agitation against inflation and the recent hike in prices of petroleum products.

The exact date for the agitation or long march would be decided in the PDM’s meeting today (Oct 17). The PDA called on people to come out on the streets and join its rallies and public meetings to express their resentment against tsunami of price hike in the country.

The opposition parties in the PDM, nevertheless, rejected any possibility of the return of the Pakistan Peoples Party (PPP) into its fold.

Meanwhile, PPP Chairman Bilawal-Bhutto Zardari, in a public meeting in Karachi on Sunday held to mark the anniversary of the 2007 Karsaz bombing on Benazir Bhutto’s convoy, also said his party would stage rallies across the country against inflation, with the main event scheduled for November 30 in Khyber Pakhtunkhwa on the occasion of PPP’s founding day.

“I have talked to the heads of opposition parties in the PDM, including PML-N president Shehbaz Sharif, and took them on board on the movement’s decision to hold rallies throughout the country,” PDM chief Maulana Fazlur Rehman said at a press conference.

Flanked by opposition leaders, including Mehmood Khan Achakzai and Shahid Khaqan Abbasi, the Maulana said that in the first phase, the opposition alliance would stage rallies in different cities for two weeks, but their schedule would be announced after a meeting on Monday (today).

“There is no question of Prime Minister Imran Khan and his government completing their five-year term,” Maulana Fazl said.

He said there was no option of talks with the government as it was destined to go home, adding that “we are not playing a futile game”.

Responding to a question that if any hurdle was created in the way of PDM’s anti-government campaign, he said: “We are not afraid; no one can create any hurdle now.”

Asked about bringing a no-confidence motion against the prime minister or opting for resignations from the assemblies, Maulana Fazl said it was too early for such moves.

“I appeal to the entire nation to come out without any fear and not let the rulers, who have become a source of sufferings for it, rule anymore,” Maulana Fazlur Rehman, who heads Jamiat Ulema-i-Islam (JUI-F), said, adding that the opposition parties were ready to fight against what he called “corrupt, incompetent and fake” government.

The JUI-F chief said the government had raised the prices of petroleum products eight times over the past four months.

“The government has increased petrol price by Rs30.70 since June,” he added.

He said foreign debt had increased from Rs25,000 billion to Rs45,000bn during the tenure of the present government, and asked how would the nation repay it?

The Maulana categorically ruled out any possibility of the PPP joining the PDM.

“There is no chance of its return,” he said when asked if the PPP could become part of the opposition alliance.

The PPP and Awami National Party (ANP) parted ways with the PDM in April after PML-N’s Shahid Khaqan Abbasi, in his capacity as the alliance’s secretary general, issued them show-cause notices for nominating PPP leader Yousuf Raza Gilani as opposition leader in the Senate “in violation of the unanimous decision” of the PDM.

Meanwhile, the PML-N announced that the opposition had decided to launch a countrywide campaign against the worst inflation ever in the history of the country brought upon the nation by the PTI government.

According to a press release, the decision was announced after the party’s president, Shehbaz Sharif, and JUI-F chief Maulana Fazlur Rehman, in a telephonic conversation, discussed the rapidly deteriorating situation in the country and the plight of the people burdened by inflation.

“After thorough consultation, the two leaders agreed that the people of Pakistan could no longer bear the burden of this ‘economic terrorism’ by the Imran Khan-led government and that the opposition would start a comprehensive and full-scale campaign against this injustice,” the press release said.

The two leaders decided to stage protests, rallies and marches across the country, it said, adding that they were of the view that it was time for leaders to come out of their homes to save the nation from inflation, unemployment and economic catastrophe.