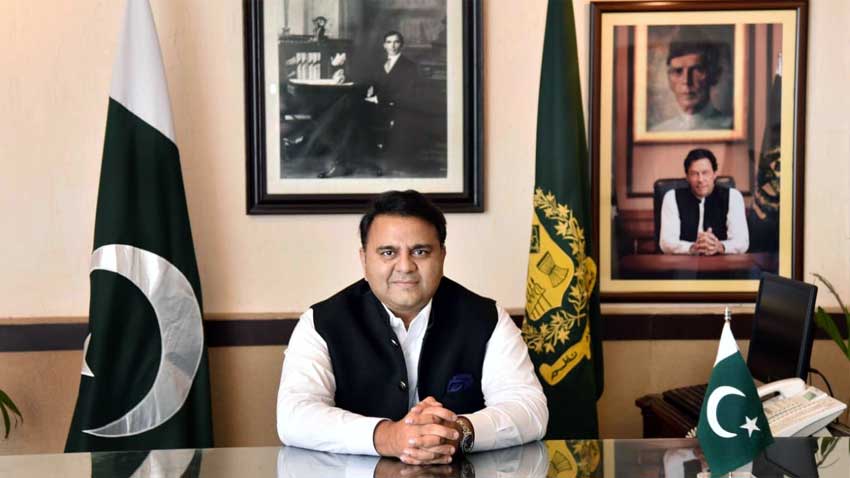 Information Minister Fawad Chaudhry on Tuesday said the government would not take any dictation (from the West) to settle internal issues, including action against banned Tehreek-i-Labbaik Pakistan (TLP).

He was speaking at a press conference held after the federal cabinet meeting.

Besides several other decisions, the meeting, which was presided over by Prime Minister Imran Khan, approved two important ordinances for ensuring transparency in elections and granting right of vote to overseas Pakistanis by introducing modern technology.

The cabinet gave credit to the government for facing “not a single corruption scandal” and not receiving complaints of favouritism and unfairness while appointing heads of 58 government departments.

The meeting also decided to involve lawyers’ bodies and bar councils in electoral reforms even if the opposition did not join the process.

“We will not take action against anyone on the directives of any country,” Fawad Chaudhry said while replying to a question about the European Parliament’s recent resolution seeking withdrawal of GSP Plus status of Pakistan.

Later, talking to media, the minister claimed that the issue of GSP Plus status and EU Parliament’s resolution was not discussed in the cabinet meeting.

“However, the government is firm in its stance that it will not take any dictation on internal issues,” he added.

Mr Chaudhry said action that had been taken against the TLP which led to its ban was the government’s own decision because the party had violated Islamic norms and laws of the country.

The minister said the cabinet approved two ordinances — one would enable the Election Commission of Pakistan (ECP) to use electronic voting machines (EVMs) during polls and the other would empower it to take steps for giving voting rights to overseas Pakistanis.

The minister said the government’s electoral reforms consisted of four parts — use of EVMs, e-voting for overseas Pakistanis, biometric mechanism and legislation.

He said electronic voting machines had been developed and the government had unveiled its legislation agenda for the purpose, whereas work was under way on biometric and e-voting mechanism.

The cabinet was given a briefing by Minister for Science and Technology Shibli Faraz and Information Technology Minister Syed Aminul Haq on electronic voting machines and e-voting.

Mr Chaudhry said the cabinet was informed that the lowest implementation of standard operating procedures (SOPs) related to coronavirus was seen in Sindh, especially Karachi. The situation in the province, particularly in the metropolis, was a matter of concern, and if the SOPs were not followed, the situation could further worsen and badly affect the supply chain upcountry, he added.

Islamabad, the minister said, was at the forefront in the implementation of SOPs while there was stability and decrease in Covid-19 cases in Punjab and Khyber Pakhtunkhwa due to better compliance with precautionary measures.

He pointed out that enforcement of health guidelines had significantly improved with the involvement of the army.

He said the cabinet had also approved deployment of the army in Sindh on the request of the provincial government, adding that the situation in the province could have been better if its government had opted for the deployment earlier.

The minister said during the last 24 hours, 161 people had died of coronavirus, with majority of the casualties being reported in Punjab and Khyber Pakhtunkhwa, whereas 3,377 got infected, taking the total number of active cases to 86,151.

He said lockdown during Eid holidays was aimed at curbing increase in cases. He hoped that the Sindh government would pay special attention to the implementation of SOPs and with army deployment the situation would hopefully improve there.

Referring to the ECP’s order to recount votes polled in NA-249 Karachi by-election, Fawad Chaudhry said re-polling should be held in the constituency because the winning candidate would be getting hardly five per cent votes.

“It is a matter of concern that anyone elected by getting only 5pc votes would represent constituents in the assembly,” the minister said.

It was a universal truth that rigging had been done in the by-election which was why the PTI had demanded re-polling, he added.

About Bilawal Bhutto-Zardari and Maryam Nawaz, he said unfortunately an immature political leadership had been imposed on the country, which did not know the importance of legislature.

Likewise, he said, Shehbaz Sharif and Ahsan Iqbal wanted the ECP to reform the electoral process on its own, adding that both the Pakistan Peoples Party and Pakistan Muslim League-Nawaz were reluctant to give voting rights to overseas Pakistanis.

“If they do not support reforms, the government would move ahead to ensure participation of expats in the electoral process, keeping in view their key role in the country’s economy,” he said.

The information minister said how could the Parliament be made irrelevant and the departments concerned like the National Accountability Bureau and ECP allowed to carry out legislation on their own, adding that Prime Minister Imran Khan was leading the initiative of electoral reforms through the Parliament.

Mr Chaudhry said initially 24 desks were being set up in foreign embassies for issuance of inheritance certificates. As a result of this initiative, overseas Pakistanis would not be required to come to Pakistan for the purpose, he added.

The minister said Prime Minister Khan would pay an official visit to Saudi Arabia on Ramazan 25, adding that the cabinet had approved establishment of Pak-Saudi Supreme Coordination Council for which a memorandum of understanding was signed during the visit of Saudi Crown Prince Mohammed bin Salman to Pakistan.

This council, he said, would greatly help promote bilateral relations and remove hurdles.

He said launching of the one billion tree drive in Saudi Arabia would give an opportunity to the Pakistani labour.

The minister told media persons that the cabinet had approved the issuance of a commemorative coin on the completion of 100 years of NED University Karachi, which was one of the best higher education institutions in the region. A 90-day remission had also been given to prisoners on the occasion of Eidul Fitr, however, concession would not be extended to those involved in serious crimes like terrorism or espionage, he said.

In this article:Army deployment, Eropean union on Pakistan GSP Status, Fawad Minister for Information and Broadcasting, Prime Minister of Pakistan