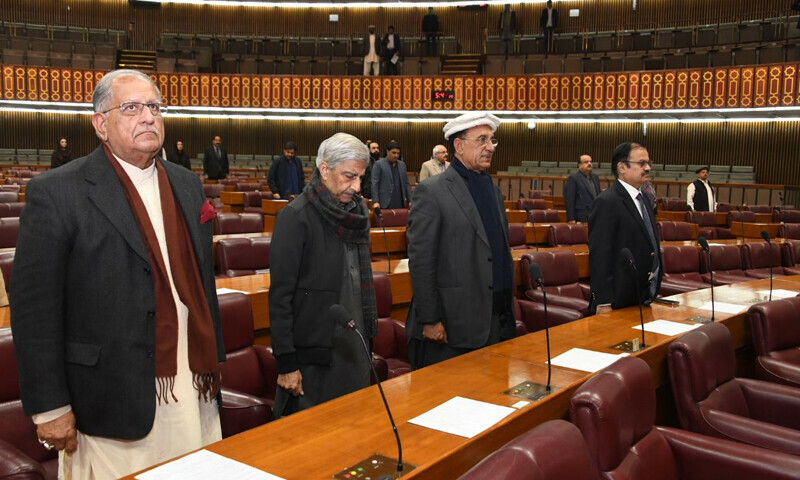 Islamabad: In a frantic attempt to get the local government (LG) polls in the federal capital delayed, the National Assembly on Thu­rsday passed a government bill seeking to increase the number of union councils from 101 to 125.

The move comes less than 10 days ahead of the polling day, December 31, and the bill was passed with the house visibly lacking quorum throughout the proceedings which lasted less than 40 minutes.

A lawmaker even asked if the house was in order and Speaker Raja Pervaiz Ash­raf replied in the affirmative without ordering a count.

Against the required strength of 86 for the quorum, 54 lawmakers were present in the house at the start of the session and just 43 at the end, according to a fact-sheet prepared by the Free and Fair Election Network (FAFEN).

Rules were suspended to allow taking up for consideration at once the Islam­abad Capital Territory Loc­al Government Amendment Bill introduced by Minister of State for Law Shahadat Awan on behalf of Interior Minister Rana Sanaullah.

PTI dissident Ramesh Kumar Vankwani again tried to point out the lack of quorum when the bill was being moved, but his voice was simply ignored by the speaker.

Before the controversial bill was put to vote, Maulana Akbar Chitrali of Jamaat-i-Islami raised questions over the last-minute decision to amend the law a little over a week before the polls scheduled for December 31.

He said the transfer of power to grassroots level was a constitutional obligation and the only way to efficiently serve the masses. He regretted that the Constitution had been made a toy and fiddling with it had become a custom for the rulers.

He said the move meant to get the LG polls in the capital delayed was unconstitutional and recorded his strong protest over it.

PTI dissident Ramesh K. Vankwani also criticised the summoning of the NA for a single day exclusively for approving the controversial bill. Claiming that the daylong session cost the national kitty Rs50 million, he asked the government why it was trying to escape elections.

Sabir Qaim Khani of MQM-P supported the bill. He called for fresh delimitation of constituencies for LG polls in Sindh as well. He asked as “How can the people be served when delimitation is not proportionate to population,”

Commenting on the development, a senior official of the ECP said the body would stick to its position. It’s committed to holding local government elections as per schedule. He said amendments to an act could not override constitutional provisions.

He said all steps for electoral exercise, including filing and scrutiny of nomination papers, decision by Appellate Tribunals, finalisation of candidates, allotment of symbols, announcement of polling scheme, appointment and training of polling staff and printing of ballot papers had been completed and the stage was now set for holding LG polls.

He said as the ECP pointed out in its order dated December 20, the federal government increased the number of union councils from 101 to 125 without concurrence of the Election Commission as required under Section-4(4) of the ICT Local Government Act, 2015.

He said the move to amend the bill at this stage was not only immoral and mala fide, but illegal as well.

Increase in the number of union councils and provision for direct election for offices of mayor and deputy mayor are key features of the LG amendment bill passed by the National Assembly.

Section 6(1) of the Islamabad Capital Territory law in its amended form reads: “There shall be one hundred and twenty-five Union Councils within the Islamabad Capital Territory under this Act. The Federal Government on the recommendations of Ministry of Interior by notification in the official Gazette may increase or decrease the number of union councils from time to time.”