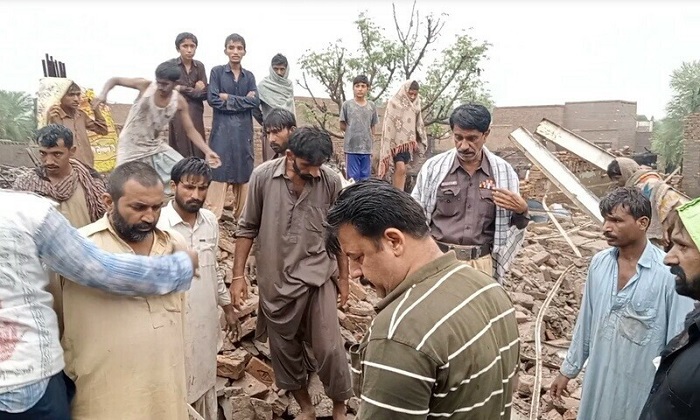 This event happened in the village next to Shaheed Mushtaq at approximately seven in the morning. Khairpur, which includes 88 union councils and eight tehsils, has been submerged due to heavy rain. Because of the destroyed road infrastructure, it was challenging for the rescue crews to get there. Over 500 people have been injured and at least 120 individuals have died as a result of rain-related accidents thus far.

They said that there were up to 200 individuals at the mosque and that many locals chose to remain there after their homes were destroyed by floodwaters.

The incident happened hours after incumbent provincial CM Murad Ali Shah visited flood-hit areas of Sindh.He presided over a meeting to examine the situation and then informed the media that it was a natural catastrophe. The chief minister indicated that after six months, roads will be restored.

Due to heavy rain and flooding in the nation, Foreign Minister Bilawal Bhutto Zardari postponed his trip abroad, the party announced.

He declared, “My countrymen are in need, and I cannot go under these conditions. I will remain among the people in this challenging scenario.”

FM Bilawal, who also serves as the leader of the Sindh government, instructed the party’s elected officials to remain in their local communities. “The victims of the rain will receive every conceivable aid”.

After examining flood damage in the Sanghar area of Shaheed Benazirabad Division, Murad responded to a question by saying that officials who were found to be negligent in the performance of their duties would be suspended. Along with Shazia Marri, the federal minister for social protection and poverty reduction, he was speaking at a news conference

The CM said that Sindh has had 400% more rain than last year, which has had a negative impact on the whole area. The heavy rains have also devastated lives and property as well as roads and other infrastructure, the CM added.

Every region of Shaheed Benazirabad was severely impacted, he said, but daur Taluka reported significant loss and was thus designated as a calamity-hit area.

“The Sindh government is trying, on a priority basis, to bring rain-hit residents back to their houses after finishing drainage work of accumulated rainwater, however there were over 135,000 individuals who had been evacuated, of whom about 12,000 were staying in relief camps set up by district administration.”