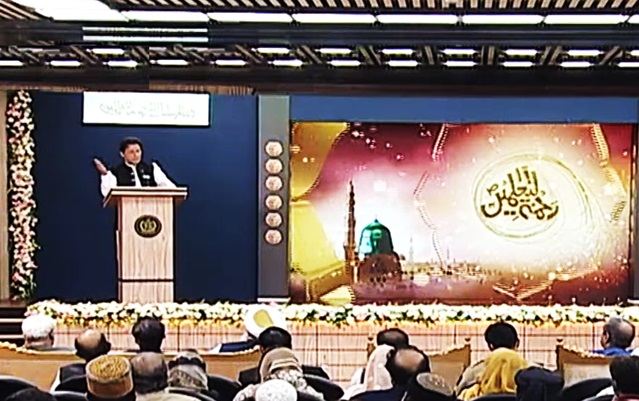 ISLAMABAD: Prime Minister Imran Khan on Sunday inaugurated the official celebrations for the month of Rabi ul Awal with a special message for the Pakistani youth and said that countries, where the rule of law reigns supreme, are bound to progress.

Speaking during the Rehmatul-lil-Alameen Conference in Islamabad, the premier said that societies that face moral decline are unable to move towards advancement.

PM Khan also announced the establishment of a Rehmatul-lil-Alameen Authority in the country to ensure the implementation of the teachings of the Holy Prophet (PBUH) in society.

The premier said that the authority will monitor the curriculum being taught at schools and organise research in universities regarding the true message of Islam in light of the teachings of the Holy Prophet (PBUH). He stressed the need to undertake research on Muslim heroes.

The prime minister said a cartoon series will be made to introduce Islamic culture to our children. He said Islam has its own cultural values that need to be taught to our children to protect them from evils like sex crimes.

He said the authority will also remain vigilant of any blasphemous content being shared on the media and to portray the real picture of Islam.

The conference was attended by government officials, civil society members, journalists, and members of minority communities. Federal Minister for Science and Technology Shibli Faraz, Minister for Information and Broadcasting Fawad Chaudhry, and Minister of Education and Professional Development Shafqat Mehmood were also in attendance.

The premier said that since Pakistan’s population predominantly comprises the youth, he would like to send a special message to them.

Providing examples of Islamic historical figures that ruled the world in the past, the premier said that the secret to their success was that they followed the true teachings of Islam based on humanitarianism. He also talked about their bravery and courage because of which they could not be defeated.

“There was no bigger [military] general in the history of the world than Khalid bin Waleed as he never lost a battle,” the premier said.

He said that the Holy Prophet (PBUH) was the first-ever personality in the history of the world who established a welfare state (riyasat-e-Madina).

“For the first time in history, the state took the responsibility for the poor and the destitute, promoted and prioritised education, and made it compulsory for both men and women,” he said.

The premier said that the teachings of the Holy Prophet (PBUH) must be inculcated among Pakistani children through schools.

“There should be role models for kids to follow and [no one could be a better role model for them than the prophet of Islam]” he said.

The prime minister said that the only way to put Pakistan on the way to progress is to follow the sunnah of the Holy Prophet (PBUH) in letter and spirit.

“It is my belief that the country cannot progress without following the true teachings of Islam because certain things have crept into the Pakistani society to stop it from advancing,” PM Imran Khan said.

Providing the examples of the West and China, the premier said that countries therein adopted principles of fairness and justice which led to their success.

Talking about sexual crimes against women and children, he said that a governmental probe into the horrific incidents of paedophilia in Kasur revealed that such vices crept into society through Hollywood and Bollywood.

He urged Pakistani scholars to teach people, especially the youth, that blindly following the West would only lead to societal disintegration and the destruction of the family system.