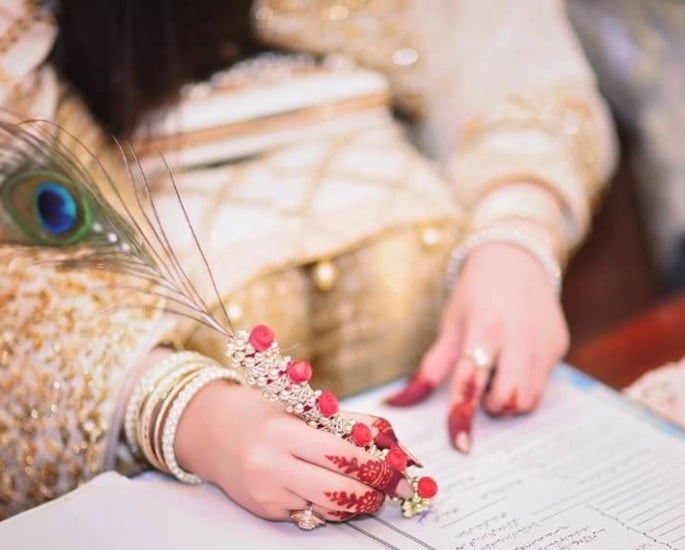 ISLAMABAD: The federal government is incorporating a major change in the marriage certificate, initially starting from NADRA in Islamabad.

The government has given a firm assurance to legislators that it is including the oath of Khatm-e-Nabuwwat in the marriage certificate form in Islamabad on the pattern of National Database and Registration Authority.

Responding to a calling attention notice in the National Assembly today, Parliamentary Secretary for Interior Muhammad Sajjad gave the assurance to the lawmakers.

MNAs Muhammad Jamaluddin, Salahuddin, Aliya Kamran and others raised the issue of the non-inclusion of the oath of the finality of the prophethood [Peace Be Upon Him] in the marriage registration form.

The matter was handed over to the standing committee of the Parliament for further action while NA Speaker Raja Pervaiz Ashraf said that the legislation should be done for the inclusion of the oath.

Opposition leader Raja Riaz appealed to the federal government to ensure smooth movement of the general public. He said that the PTI workers were creating problems for masses with the support of the Punjab government and blocking roads.

Raja Riaz also said hooliganism in the name of a long march was continuing under the supervision of the Punjab police. He demanded the federal government uphold law and order in the country.

Meanwhile, Jamaat-e-Islami member Maulana Akbar Chitrali appreciated Finance Minister Ishaq Dar’s decision that the SBP and the National Bank of Pakistan would take back their appeals they have filed with the Supreme Court against the Federal Shariat Court’s decision against the interest-based financial system in the country.