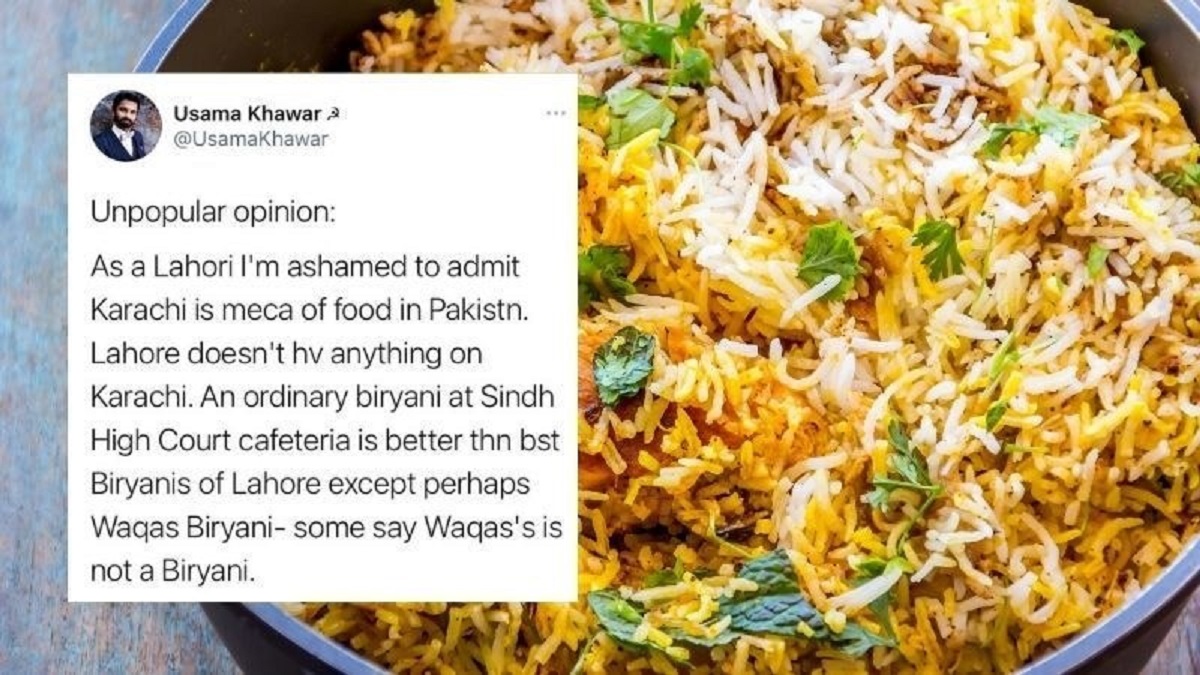 Folks on Twitter are at it again. They’ve triggered the ancient and unsolvable debate of who does biryani better, Karachi or Lahore. When Twitter user Usama Khawar posted about his preference for Karachi food — specifically biryani — as a Lahori himself, quite a few people were left scandalized.

“As a Lahori I’m ashamed to admit Karachi is Mecca of food in Pakistan,” he wrote. “Lahore doesn’t have anything on Karachi. An ordinary biryani at [the] Sindh High Court cafeteria is better than [the] best biryanis of Lahore, except perhaps Waqas Biryani — some say Waqas’s is not a biryani,” he wrote on Twitter.

He acknowledged that the idea was hard to digest but Khawar stood his ground. “Difficult to accept that Lahori food is inferior! Please don’t rub it in my face!” he pleaded.

It wasn’t long before people poured in with their passionate points of view. There were quite a few who supported Khawar’s assertions.

But not everyone agreed with Khawar’s claims.

Then there was the party who took a more intellectual approach to the matter. “Biryani is better in Karachi”, a participating debater replied. “Maybe a couple of other dishes. But overall Lahore has better food.”

This was enough to open the floodgates and the debate spread to other food items as well. Enter Nihari. Karachi might do biryani better but there’s no beating Lahore’s nihari, in their opinion.

One Peshawar resident claimed “Come to Peshawar if you really want to enjoy authentic desi food. Lahore is definitely overrated.

The other Twitter user from Peshawar claimed “Peshawar food is richer, more diverse and indigenous than any other city in Pakistan. Unfortunately not many outside Peshawar know about most delicacies apart from the usual Chapli Kebab and Karahi.”

Then there was one city that absolutely no one favored when it comes to food. Even the city’s own folks couldn’t put up a fight. Our heart goes out to the food scene in Islamabad.

We islamabadians are the most mehroom (deprived) in food and hotels. There is not a single good restaurant in the whole Islamabad and Rawalpindi in any manner, said Tahir, resident of Islamabad

The conversion currently ongoing on Twitter has us pretty entertained but we’ve got to side with Khawar on this one. There is nothing like a steaming plate of biryani to make your day and that biryani can only be had in Karachi.