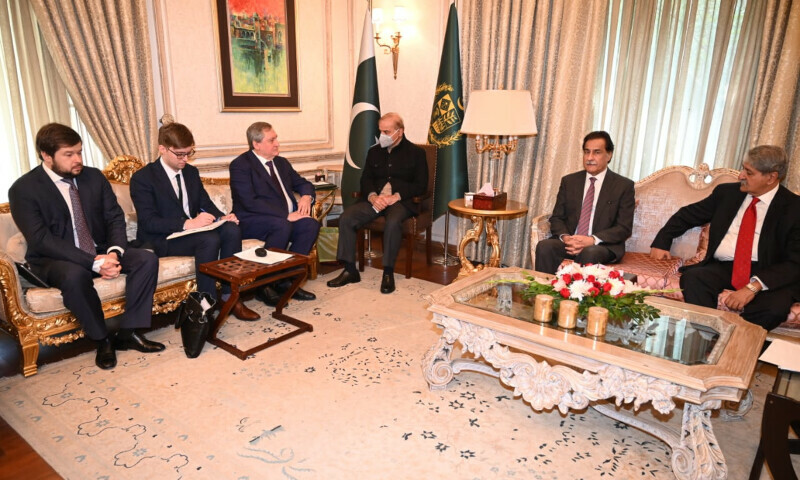 Pakistan and Russia on Thursday “finalised consultations” to enhance cooperation in areas of mutual interests — a day after they discussed ways for supplying oil and gas to Pakistan on a “long-term” basis — according to state media Radio Pakistan.

The consultations today were held in Islamabad between both countries’ energy ministers and other government officials on the second day of the eighth meeting of the Inter-governmental Commission on Trade and Economic, Scientific and Technical Cooperation of Pakistan and Russia.

A Russian delegation led by Energy Minister Nikolay Shulginov is currently visiting Islamabad to discuss ways for improving bilateral economic and trade relations, with the focus mainly on the provision of oil and gas to Pakistan at discounted rates.

The visiting delegation had also called on Prime Minister Shehbaz Sharif in Lahore on Wednesday, where “views were exchanged on supplying oil and gas from Russia to Pakistan on a long-term basis”, a statement from the Prime Minister’s Office (PMO) said.

The series of talks follow the claim by Minister of State for Petroleum Musadik Malik last month that Russia had agreed to provide oil to Pakistan at discounted rates to meet the country’s rising domestic and industrial energy demands.

Pakistan would purchase crude oil, petrol and diesel from Russia at discounted rates, he had said.

The vow had come after a Pakistani delegation led by Malik visited Moscow in late November last year to initiate talks for the procurement of oil and gas at discounted prices.

The draft protocol finalised during today’s meeting would be agreed upon and signed at the meeting’s plenary session to be held tomorrow, Radio Pakistan said.

It further said Russia opined that significant progress has been made in various areas, which would ultimately pave the way for deepening and strengthening relations between Pakistan and Russia.

An ‘Important’ partner in Islamic world

Shulginov during the meeting had also delivered a “special message” from the Russian President Vladimir Putin to the premier.

In his message, according to the PMO statement, Putin had said that Russia considers Pakistan as its “important” partner in South Asia and the Islamic world and reiterated Moscow’s strong interest in deepening the bilateral relationship.

Meanwhile, Shehbaz had highlighted the importance Pakistan attaches to its relations with the Russian Federation.

He recalled his meeting with Putin in Samarkand, Uzbekistan in September last year and said “important decisions” were reached back then to further strengthen Pakistan-Russia relations.

“Matters related to gas pipelines were also reviewed,” the PMO added, referring to a 1,100-kilometre gas pipeline known as the Pakistan Stream Gas Pipeline Project stretching from Karachi to Punjab.

Pakistan and Russia have signed two agreements — in 2015 and 2021— for the construction of the $2.5 billion pipeline, which was slated to begin last year but could not be started due to global sanctions on Moscow.

The country has been grappling with increasing energy requirements, mainly oil and gas, together with an inflating current account deficit because of oil payments.

The procurement of oil has long been a centre of local politics, particularly after former premier Imran Khan’s visit to Russia only a day before it launched its war on Ukraine on Feb 24, 2022.

Khan, ousted through a no-confidence vote in parliament in April, had claimed that his Moscow visit was one of the reasons behind his ouster.