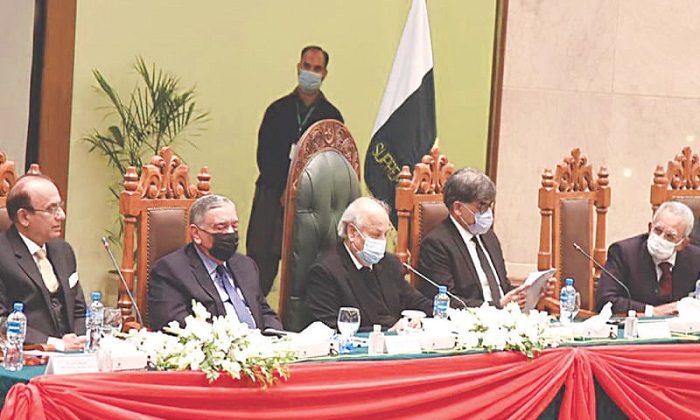 ISLAMABAD: Chief Justice of Pakistan (CJP) Justice Gulzar Ahmed said governance in the country had become too complicated and was not being handled in the spirit it was supposed to be.

CJP Gulzar Ahmed said, “The capacity to enforce rights of the citizens is not growing and as a result the hapless people of this country are facing typical problems and their fundamental rights are being violated with impunity,” regretted the CJP while speaking at the book launching ceremony of “Reading The Constitution of Pakistan — Article wise discussion, fair comments on case, law and the history”. Former Lahore High Court judge Syed Shabbar Raza Rizvi had written this book, involving more than six volumes and 5,000 pages.

The Chief Justice of Pakistan regretted that the governance had been beset with such a situation that petty issues often landed at the courts in the shape of petitions.

Even small things, supposed to be handled by the government having a large number of workforce by ensuring delivery to the people at their doorstep, were not being done, the chief justice bemoaned. He said small matters like cleaning of roads, lifting of garbage, maintaining parks and open spaces, provision of playgrounds and ensuring construction in accordance with bylaws were prime and basic functions of the government, but these basic issues were not being attended to.

As a result, the courts were being burdened with small things and consequently had to enforce the rights which the citizens were entitled to through judgements and declarations, the chief justice observed.

He urged the rulers to take notice of what was happening all around them and ensure that the constitution was enforced in all facets of public life.

Earlier, Justice Khosa recalled that Pakistan used to be very prosperous, peaceful with powerful society but was now afflicted with hunger and insecurity “only because we have failed to express gratitude for the bounties bestowed upon us by Allah Almighty”.

Justice Khosa urged the wise people of society to roll their heads and ponder whether they as a nation had been ungrateful.

He enlisted five issues confronting the nation and said unless these were identified and a solution was discovered, the country would continue to face insecurity. “For this we have to catch the bull by the horn.”