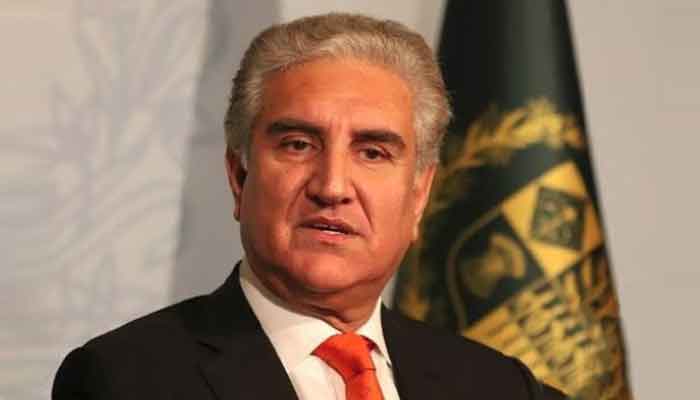 The United States should give Pakistan the importance it deserves, believes Foreign Minister Shah Mahmood Qureshi.

Though the US has sought help from Pakistan to halt the Taliban advance while US troops are pulling out of Afghanistan, US President Joe Biden has not spoken over the issue with Prime Minister Imran Khan so far.

But Qureshi doesn’t think Pakistan should worry over not receiving a phone call. If the US expresses disengagement with Pakistan, it puts them at a disadvantage too, Qureshi said.

He said an impression was being given of tensions in Pakistan-US relations.

The foreign minister was confident that Pakistan and the US want the same things.

“Let the Taliban and Afghan rulers sit together and decide their future,” he said, adding that Pakistan is trying its best to persuade the Taliban.

He said that what Pakistan is doing is for its security and survival and for peace and stability.

The FM also spoke over Kashmir, saying that the Indian government uses the Kashmir issue for its domestic politics.

“India could not win the hearts of Kashmiris,” he said.

US president not calling Pakistani PM is beyond my understanding: Moeed Yusuf

A day earlier, Pakistan’s National Security Adviser (NSA) Moeed Yusuf had said that Washington’s lack of initiative to interact with Islamabad is beyond his understanding.

“The president of the United States hasn’t spoken to the prime minister of such an important country who the US itself says is make-or-break in some cases, in some ways, in Afghanistan — we struggle to understand the signal, right?” Yusuf told the Financial Times in an interview at Pakistan’s embassy in Washington.

“We’ve been told every time that . . . [the phone call] will happen, it’s technical reasons or whatever. But frankly, people don’t believe it.”

Responding to the NSA’s complaint, a senior Biden administration official clarified: “There are still a number of world leaders President Biden has not been able to speak with personally yet. He looks forward to speaking with Prime Minister Khan when the time is right.”

Yusuf is currently in Washington to discuss the Afghan issue as the US troops are in the pullout process from Afghanistan. He is part of a delegation including the head of Pakistan’s ISI intelligence agency.

“Let me be categorical if the prime minister had not instructed me and the delegation to be here, we won’t have been here,” said Yusuf.

On July 30, Yusuf discussed the ongoing situation in Afghanistan with his US counterpart Jake Sullivan and highlighted the need for an urgent reduction in violence in the country.

After the meeting, he tweeted, “Had a positive follow-up meeting with NSA @JakeSullivan46 today in Washington. Took stock of progress made since our Geneva meeting & discussed bilateral, regional and global issues of mutual interest.”

He also said they agreed to sustain the momentum in the Pak-US bilateral cooperation.

The US official also went to the microblogging website to issue a statement about the meeting. “We discussed the urgent need for a reduction in violence in Afghanistan and a negotiated political settlement to the conflict,” he said.

No call doesn’t mean US-Pak ties are not good: US diplomat

On July 30, US spokesperson for the Office of International Media Engagement Zed Tarar, based in London, said that no telephone call from the US president to the Pakistani premier in over six months doesn’t mean that US-Pakistan relations are not functioning well.

“The officials of the two administrations are in regular contact with each other and cooperating at various levels, as normal. I don’t want to go into the logistics of the telephone call matter. Only a few days ago, the US gave three million vaccine doses to Pakistan as a goodwill gesture,” Tarar said, during an interaction with the Pakistani media.

US really messed it up in Afghanistan: Imran Khan

“I think the US has really messed it up in Afghanistan,” PM Khan had pointed out during an appearance on PBS NewsHour, an American news programme, aired recently.

The premier said the Americans should have sought a political settlement with the Taliban at a time when they have a considerable military presence in Afghanistan. But, now after most of the US and allied forces have already withdrawn from the country, the Taliban, considering it their victory, are in no mood to reconcile.

“But once they had reduced the troops to barely 10,000, and then, when they gave an exit date, the Taliban thought they had won. And so, therefore, it was very difficult for now to get them to compromise,” he told programme host Judy Woodruff.

The Taliban Wednesday announced to launch more attacks on the government officials. A day earlier, the Afghan defence minister, Bismillah Mohammadi, escaped their assault in Kabul.

The Afghan and US militaries have stepped up air strikes against the insurgents, and the Taliban said Wednesday the Kabul raid was their response.

“The attack is the beginning of the retaliatory operations against the circles and leaders of the Kabul administration who are ordering attacks and the bombing of different parts of the country,” Taliban spokesman Zabihullah Mujahid said in a statement on social media.

It represents a major escalation by the Taliban, who have largely refrained from large-scale attacks in the capital since starting talks with the US on their troop withdrawal.