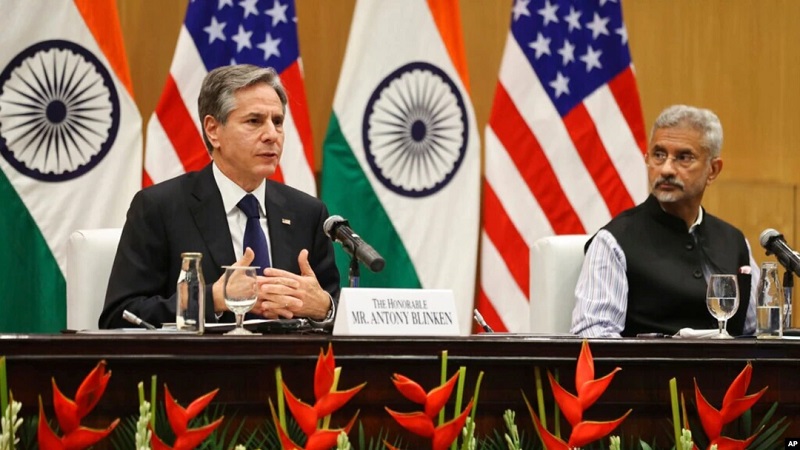 ISLAMABAD: The United States of America and India in a joint statement urged Pakistan to take “immediate, sustained, and irreversible action” to ensure that no territory under its control was used for terrorist attacks.

“India strongly condemned use of terrorist proxies and cross-border terrorism in all its forms and called for the perpetrators of the 26/11 Mumbai attack, and Pathankot attack, to be brought to justice,” the statement issued by the US Embassy and Consulates in India said.

It was issued as a part of the fourth ‘2+2’ dialogue between India and the United States, which ended on Tuesday in Washington DC. India’s external affairs and defence ministers, S Jaishankar and Rajnath Singh, held meetings with their their US counterparts, Secretary of State Anthony Blinken and Secretary of Defense Lloyd Austin.

Ahead of the dialogue on April 11, Indian Prime Minister Narendra Modi and US President Joe Biden met virtually.

The 2+2 dialogue is a format of talks between the foreign and defence ministers of India and its allies on strategic and security issues. India holds dialogues on this format with four of its strategic partners — US, Russia, Australia, and Japan.

“The 2+2 Ministerial is an important opportunity to advance our shared objectives across the breadth of the US-India Strategic Partnership, including enhancing our people-to-people ties and education cooperation, building diverse, resilient supply chains for critical and emerging technology, scaling up our climate action and public health cooperation, and developing a trade and investment partnership to increase prosperity for working families in both countries. It is also a chance to highlight the growing major defence partnership between the United States and India,” a statement issued by the US ahead of the meeting had said.

In the joint statement issued yesterday after the meeting, both countries called for concerted action against all terrorist groups, including those proscribed by the UNSC 1267 Sanctions Committee, such as al Qaeda, ISIS/Daesh, Lashkar-e-Tayyiba (LeT), Jaish-e-Mohammad (JeM), and Hizb ul Mujahideen.

“The ministers committed to continued exchange of information about sanctions and designations against terror groups and individuals, countering violent radicalism, use of the Internet for terrorist purposes, and cross-border movement of terrorists,” it read.

India further highlighted the importance of upholding international standards on anti-money laundering and combating the financing of terrorism by all countries, consistent with Financial Action Task Force (FATF) recommendations.

“The ministers also reaffirmed their support for the early adoption of a UN Comprehensive Convention on International Terrorism (CCIT) that advances and strengthens the framework for global cooperation and reinforces that no cause or grievance justifies terrorism,” the statement added.