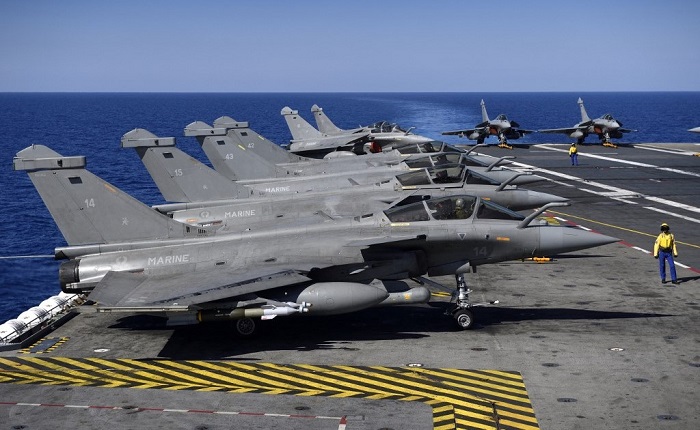 DUBAI: The United Arab Emirates (UAE) is buying 80 Rafale jets from France at a cost of $18 billion.

This was announced today when French President Emmanuel Macron met Abu Dhabi Crown Prince Sheikh Mohammed bin Zayed. Macron is on a 2-day official visit to UAE.
France’s Defense Minister said the deal was France’s largest-ever weapons contract for export while the Minister for the Armed Forces hailed the deal as “historic.”

There was no immediate confirmation of the deal from Emirati officials. Macron was greeted at the leadership pavilion at Dubai’s Expo site for talks with Sheikh Mohammed, known as “MBZ.”

“I don’t want to reveal the Christmas present” before the meeting, UAE presidential adviser Anwar Gargash told journalists in the build-up to the talks in Dubai.
Macron arrived in the early hours of Friday for a brief Gulf tour where he will also visit Qatar, host of next year’s World Cup, before traveling to Saudi Arabia on Saturday.
The UAE, which celebrated its 50th anniversary on Thursday, is expected to order dozens of Rafale jets to replace its Mirage 2000 aircraft acquired in the late 1990s.
The Emirates is the fifth biggest customer for the French defense industry with $5.31 billion (€4.7 billion) from 2011-2020, according to a parliamentary report.
Macron is accompanied by a large delegation in Dubai including Foreign Minister Jean-Yves Le Drian, Finance Minister Bruno Le Maire and Defense Minister Florence Parly.