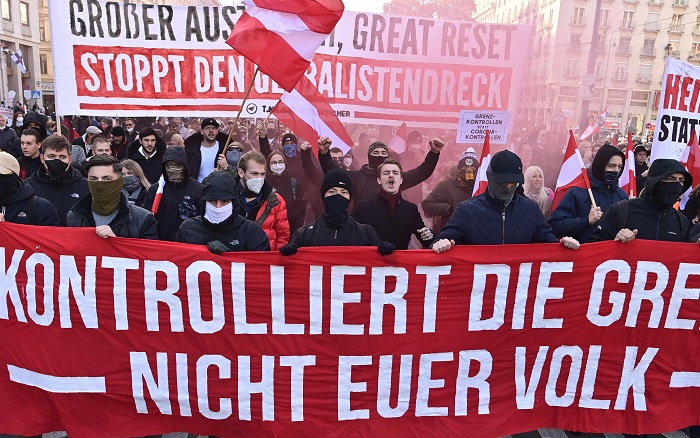 Thousands of European and French are protesting in different cities in Europe to voice their concern against fresh Covid curbs. A fresh wave of protests has emerged in several European cities and in some French overseas territories as protesters are strongly reacting to reintroduced coronavirus restrictions.

For example, police and protesters clashed in the Belgian capital Brussels, several Dutch and Austrian cities, and in the French Caribbean territory Guadaloupe on Sunday.

Europe is battling another wave of infections and several countries have tightened curbs despite high levels of vaccination, especially in the west of the continent.

In Brussels, violence broke out at a protest that police said was attended by 35,000 people. The march, focused on a ban on the unvaccinated from venues such as restaurants and bars, began peacefully but police later fired water cannon and tear gas in response to protesters throwing projectiles.

Several of the demonstrators caught up in the clash wore hoods and carried Flemish nationalist flags, while others wore Nazi-era yellow stars.

Demonstrators set off fireworks and vandalised property in the northern cities of Groningen and Leeuwarden on Sunday, as well as in Enschede to the east and Tilburg to the south, said police.

Authorities issued an emergency order in Enschede, near the German border, ordering people to stay off the streets, police said on Twitter.

A football match in the nearby city of Leeuwarden was briefly disrupted after supporters, who are barred from games because of the Covid restrictions, threw fireworks into the ground, Dutch media reported. Courtesy: TRT World

In this article:COVID, Europe, fresh wave of Covid, protests start