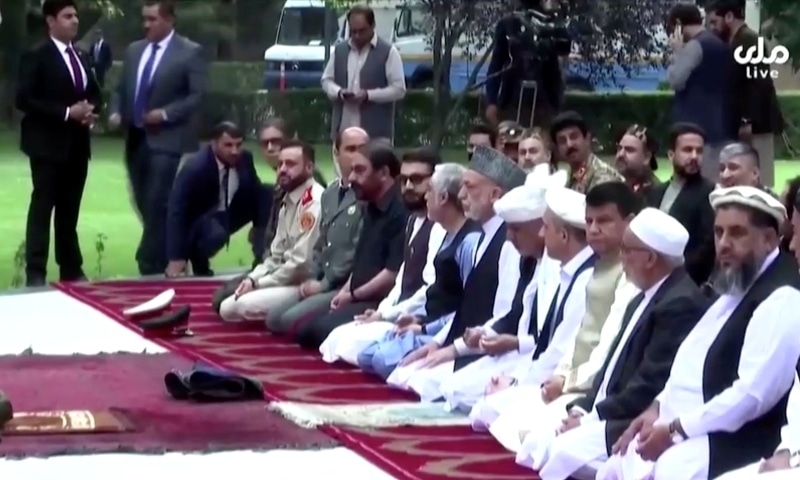 Afghanistan's President Ashraf Ghani attends Eid prayers at the presidential palace, moments after the sounds of rocket explosions were heard, in Kabul on July 20. — Reuters

KABUL: Rockets landed near the Afghan presidential palace in Kabul on Tuesday during prayers for the Muslim festival of Eidul Adha, a live television broadcast showed.

There were no immediate reports of injuries. President Ashraf Ghani and others in the vicinity had to stop the prayers after multiple loud explosions shook the area, TV reports said.

The footage shown on local media showed that participants panicked after the explosions.

Although there was no immediate claim of responsibility, it was the first rocket attack on Kabul since the Taliban launched a series of offensives to coincide with the final drawdown of foreign troops from the war-wracked country.

The early morning holiday calm was shattered by the sound of incoming rockets heard across the heavily fortified Green Zone that houses the presidential palace and several embassies, including the US mission.

He said three rockets appeared to have been fired from a pickup truck.

“Based on our initial information, we have no casualties.”

Minutes after the attack, Ghani began an address to the nation in the presence of some of his top officials.

The presidential palace was attacked last year as hundreds of people gathered to watch President Ashraf Ghani’s inauguration ceremony, prompting some to flee.

Daesh claimed responsibility for the two blasts, with no reports of casualties.

Tuesday’s attack coincides with a sweeping Taliban offensive across the country as foreign forces wind up a troop withdrawal scheduled to be complete by August 31.

It also comes a day after more than a dozen diplomatic missions in Kabul called for “an urgent end” to the Taliban’ military offensive, saying it was at odds with claims they want to secure a political deal to end the conflict.

The statement follows another round of inconclusive talks in Doha over the weekend between the Afghan government and the Taliban that many hoped would kickstart the ailing peace process.

“The Taliban’s offensive is in direct contradiction to their claim to support a negotiated settlement,” the statement read.

“It has resulted in loss of innocent Afghan lives, including through continued targeted killings, displacement of the civilian population, looting and burning of buildings, destruction of vital infrastructure, and damage to communication networks.”

For months, the two sides have been meeting on and off in the Qatari capital but have achieved little, with talks appearing to have lost momentum as the Taiban make battlefield gains.

A joint statement late Sunday said they had agreed on the need to reach a “just solution”, and to meet again next week.

“We also agreed that there should be no pause in the negotiations,” Abdullah Abdullah, who oversees the Afghan government’s delegation, told AFP on Monday.

He noted, however, that neither side was currently pursuing a joint ceasefire during the talks, despite urgent calls from Afghan civil society and the international community to end the fighting.

The Taliban and government have previously announced ceasefires during some religious holidays.

Following the weekend summit, Turkish President Recep Tayyip Erdogan announced that his administration hoped to start talks with the Taliban over the group’s refusal to let Ankara run the Kabul airport after US troops withdraw from Afghanistan.

Turkey has been negotiating with US defence officials over an offer to secure the airport, which is key to allowing countries to retain a diplomatic presence in Afghanistan after the troop withdrawal.

Fighting, meanwhile, continued in Afghanistan, with both the Taliban and the government claiming gains in various parts of the country.

Over the weekend, the Taliban’s supreme leader Hibatullah Akhundzada said he “strenuously favours” a political settlement — even as they continue their offensives.

The Taliban has been capturing districts, seizing border crossings and encircling provincial capitals as foreign forces prepare to fully exit by late August.

In Washington, the State Department said that some 700 interpreters and their immediate family members who are fleeing Afghanistan will be relocated to an army base in the state of Virginia.