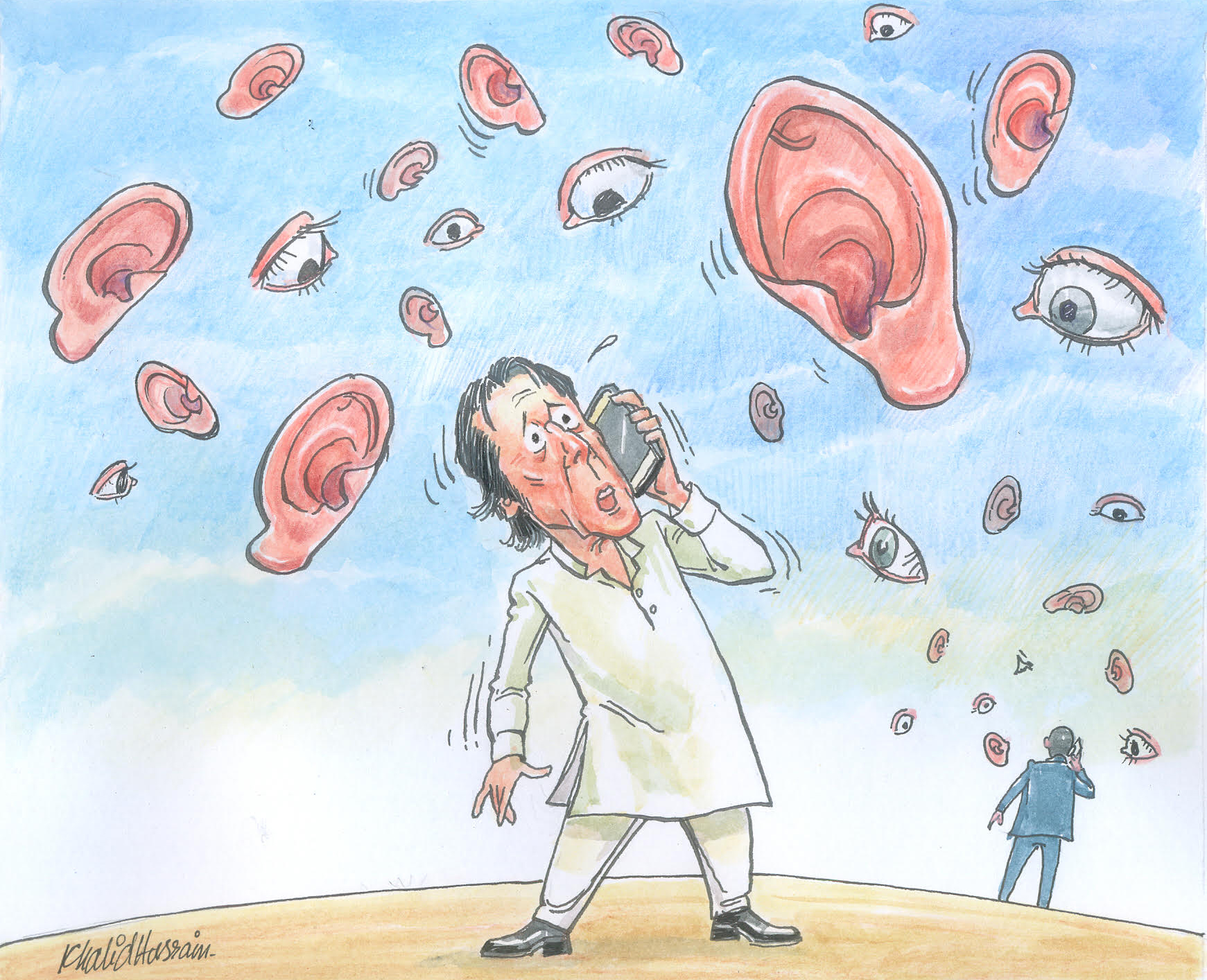 Prime Minister Narinder Modi’s government has won India a place among repressive regimes using Israeli spyware to attack foreign leaders and their own citizens.
Media reporting of the Pegasus expose has revealed that hundreds of numbers from Pakistan appeared on the Indian surveillance list, including a number once used by Prime Minister Imran Khan.

However, probably the unkindest cut of all is this: The foremost exponent of the Hindutva brand of nationalism or his aides seem unwilling to show remorse or regret for heaping the ignominy of being among perpetrators of surveillance abuse on the world’s most populous democracy

The scale at which Prime Minister Modi’s minions unleashed the military-grade espionage tool against his political opponents, journalists critical of his policies, and activists championing democratic causes has attracted huge backlash from the Indian politicians and civil society.

Throughout the past couple of weeks, there have been series of disclosures in international news stories about a company called NSO Group—an Israeli software firm and its flagship product: A piece of spyware called Pegasus. Some of the stories have revealed that a fully updated smartphone can be hacked with a single text message.

Reports have said two women close to the murdered Saudi journalist Jamal Khashoggi were among those targeted by a government agency using the spy tool.

A coalition of news outlets, including The Washington Post, Le Monde, and The Guardian is behind the reporting, and they’re calling it the Pegasus Project. The project was led by Forbidden Stories, an organization of journalists that works on stories after the original reporters have been silenced in some way. Amnesty International ran detailed forensics on 67 smartphones to look for evidence that they were targeted by Pegasus spyware — and 37 of those phones tested positive.

“Pegasus is spyware developed by a private contractor for use by government agencies”, a technical evaluation report on Pegasus has said. “The program infects a target’s phone and sends back data, including photos, messages, and audio/video recordings”

Pegasus’ developer, an Israeli company called NSO Group, says that the software can’t be traced back to the government using it — enabling plausible deniability, a crucial feature for clandestine operations.

In short, NSO Group makes products that let governments spy on citizens. The company describes the role of its products on its website as helping “government intelligence and law-enforcement agencies use technology to meet the challenges of encryption” during terrorism and criminal investigations.

Indian National Congress leader Rahul Gandhi’s response to the disclosure was scathing: “Targeted surveillance of the type you describe, whether in regard to me, other leaders of the opposition, or indeed any law-abiding citizen of India, is illegal and deplorable”, he said.

“If your information is correct, the scale and nature of surveillance you describe go beyond an attack on the privacy of individuals. It is an attack on the democratic foundations of our country. It must be thoroughly investigated, and those responsible be identified and punished.”

According to Indian media, New Delhi did not confirm nor deny whether it was a client of the Israeli firm NSO—which produced the software used in spying—or not. However, its laws do not bind the government to disclose the use of said technology.

India’s Ministry of Electronics and Information Technology, responding to questions from The Washington Post, said the claim that specific people were targeted “had no concrete basis or truth associated with it whatsoever.”

“Any interception, monitoring, or decryption of any information through any computer resource is done as per the due process of law”.

Indian security agencies used the Israeli spyware to hack a cell phone number once used by Prime Minister Imran Khan, an Israeli newspaper reported. The Prime Minister, however, does not seem to have been the only Pakistani of interest to India.

Indian intelligence agencies’ interest in tapping communications of the senior Pakistani military and civilian officials is not a new phenomenon. They have been trying to do this for a long time. One such attempt was made during the Kargil conflict when an Indian newspaper published the transcript of a conversation between the then COAS, General Pervez Musharraf, and his Chief of General Staff, General Aziz Khan.

Musharraf was in Beijing and in the telephone call Aziz was briefing him about a meeting that took place at the Prime Minister House. This transcript raised a lot of hue and cry in Pakistani political and media circles.

Reporting from the project showed that hundreds of rights activists, human rights lawyers, journalists, dissidents, political leaders, officials, and others were potentially compromised using NSO’s Pegasus software, which the firm sells only to governments.

Human rights group Amnesty International confirmed the hacking on 23 out of 67 phones subjected to technical analysis, with 14 others showing signs of attempted penetration.

Information Minister Fawad Chaudhry said Pakistan was investigating the possible hacking attempt and would raise the issue at unspecified forums if it is confirmed. Earlier, Chaudhry had expressed concerns regarding the revelations from the Pegasus Project, a consortium of news organizations producing stories based on leaks of NSO’s internal documents.

“Keeping a clandestine tab on dissenting voices is a long-standing textbook ploy of the RSS-BJP regime to commit human rights atrocities in Indian Illegally Occupied Jammu and Kashmir (IIOJK) and peddle disinformation against Pakistan,” the statement said.

“The world has seen the true face of the so-called Indian ‘democracy’ when the reports of EU Disinfo Lab, Indian Chronicle, surfaced earlier last year,” the FO spokesman said in the statement.

“We are closely following these revelations and will bring Indian abuses to the attention of appropriate global platforms. In view of the gravity of these reports, we call on the relevant UN bodies to thoroughly investigate the matter, bring the facts to light, and hold the Indian perpetrators to account”.

Pakistan has also said it would investigate the use of Pegasus malware against Prime Minister Imran Khan and senior military and government officials in the country.

A key aid of Prime Minister Khan said: “We see it as an attack on Pakistan’s sovereignty over [cyber attack] and the country will protect itself at all costs.”

Shahzad Akbar said the Pegasus scandal was potentially bigger than the Panama Papers and asserted the government was developing a legal strategy against India and the issue of Pegasus would be raised in international forums, including the United Nations and the European Union.

Akbar said that after this scandal, India’s nefarious plans against Pakistanis have been exposed. “India wants to destabilize Pakistan. Earlier, we also saw the report of Disinfo Lab, which described how India used fake media houses and NGOs to lobby against Pakistan.

The adviser said that the Israeli firm NSO has been selling the Pegasus malware software to various countries for many years. However, this requires approval from the Israeli government.

“Spyware was provided to ten countries, including India. It was used against [Naren- dra] Modi’s political opponents, including journalists, politicians, and judges,” he added.

Pakistani concerns over tapping and hacking of Prime Minister Khan’s phones are genuine. But the civil society has hardly raised a voice over the matter. Is it because Pakistan’s own security apparatus is notorious for tapping the phones of the government’s opponents and dissenting voices? Countless times the crisis situation in Pakistani politics has revealed the intrusive nature of Pakistani intelligence spying operations. However, no accountability has ever taken place.