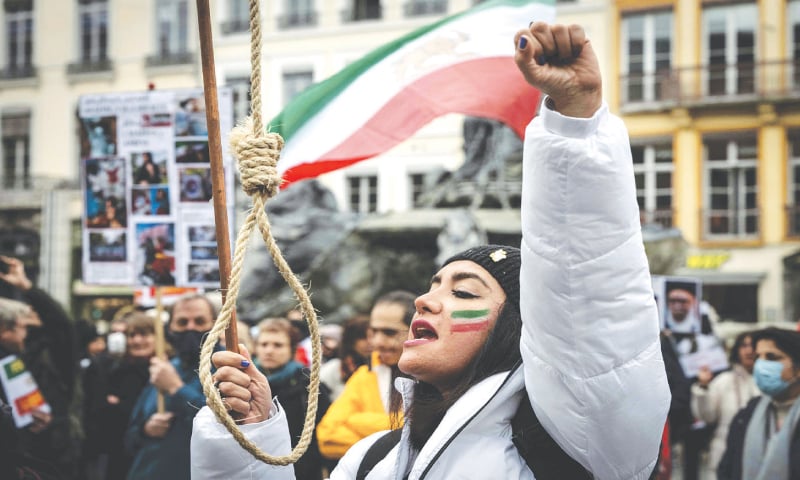 LYON: Thousands gathered and rallied in the French city of Lyon on Sunday in support of unprecedented anti-regime protests in Iran.

The protesters walked through the streets of the eastern city carrying a banner that read “Woman, life, freedom”.

Demonstrations in Iran began after the September 16 death in custody of Kurdish Iranian, Masha Amini 22.

Many of Sunday’s protesters in France had a personal connection to the country.

“I am here to demand freedom in Iran,” Sholeh Golrokhi, 49, said. “When I was little, they arrested all of my family.” “We are here to ask Western countries to be the voice of our people” and “expel Iranian ambassadors”, said Samane Ramezanpanah, 35.

In late December a 38-year-old Iranian man drowned in the Rhone river that flows through Lyon, saying on social media that he was going to kill himself to draw attention to the crackdown of the protests in Iran.

A crowd is gathering at Trafalgar Square in central London this afternoon in solidarity with anti-government protests in Iran.

Hundreds of protesters marched through central London from Marble Arch and have set up a stage beside Nelson’s Column, draped in pre-revolutionary Iranian flags.

Protests have been mounting in and outside of Iran since a 22-year-old Iranian woman, Masha Amini, died in police custody in Tehran in September 2022 after being arrested for allegedly violating strict hijab rules.

Masha had been arrested by morality police who enforce a strict dress code which requires women to wear a scarf-like covering over their hair and neck.

The protests have escalated into calls for an end to the Islamic regime, posing the biggest challenge for the clerics since the 1979 revolution deposed the shah.

On Friday, two more men were executed by the Iranian regime, officially convicted of allegedly killing a paramilitary volunteer during a demonstration.

Activists in Iran claim at least 517 have been killed and over 19,200 arrested since the unrest began.

In recent weeks, Iran has increased resistance to a global protest movement, triggered by the death of Ms Amini in September 2022.

Despite reports that the ‘morality police’ – or Guidance Patrols – had stopped patrols and hijab enforcement in December 2022, police officials in Iran last week confirmed that morality police would enforce a new scheme for hijab wearing.