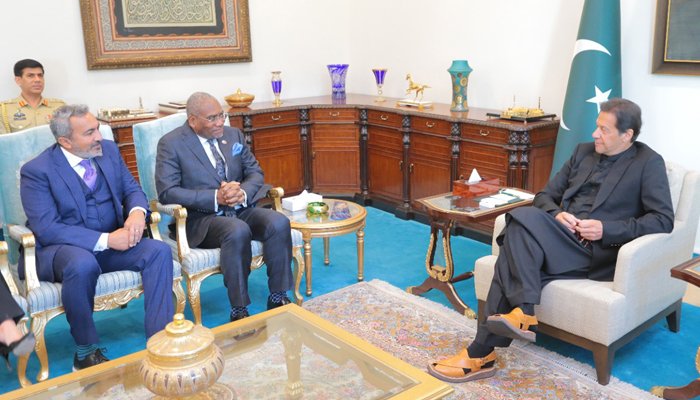 The Chairman of House of Foreign Affairs Committee Congressman Gregory Meeks and Chairman of the Subcommittee on Asia, the Pacific, Central Asia, and Non-Proliferation Congressman Ami Bera called on Prime Minister Imran Khan in Islamabad on November 22, 2021. — PID

Prime Minister Imran Khan on Monday stressed the need to address the economic challenges in Afghanistan, as he met officials from the United States of America.

Prime Minister Imran Khan held a meeting with the House Foreign Affairs Committee (HFAC) Congressman Rep Gregory Meeks and Chairman of the Subcommittee on Asia, the Pacific, Central Asia, and Non-Proliferation Congressman Ami Bera, a statement from the PM’s Office said in a series of tweets.

PM Imran Khan emphasised that Pakistan and the US needed to deepen engagement to promote peace, stability, and economic development in Afghanistan.

“The premier particularly underscored that there was an urgent need to financially assist the Afghan people as part of the effort to prevent a humanitarian crisis and economic collapse,” the PM’s office tweeted.

He also hoped that “ways and means would be found to address the liquidity issue and enable banking channels to help Afghanistan sustain its immediate economic burden and challenges.”

The United Nations, underscoring the need for urgent actions to prop up Afghanistan’s banks, warned that a spike in people unable to repay loans, lower deposits, and a cash liquidity crunch could cause the financial system to collapse within months.

In a three-page report on Afghanistan’s banking and financial system, the UN Development Programme (UNDP) said the economic cost of a banking system collapse — and consequent negative social impact — “would be colossal.”

The premier hoped that it will not only lead to further deepening of Pakistan-United States relations but will also be instrumental in strengthening ties between the Parliaments of the two countries.

“Imran Khan expressed hope that more high-level exchanges, at all tiers including the Administration, will take place between both countries reinforcing their tie,” the PM office tweeted.

Both sides maintained that Pakistan and the United States should work to strengthen bilateral trade and economic relationships as well as co-operation in health, security, counter-terrorism, and combating climate change, the PM Office said.