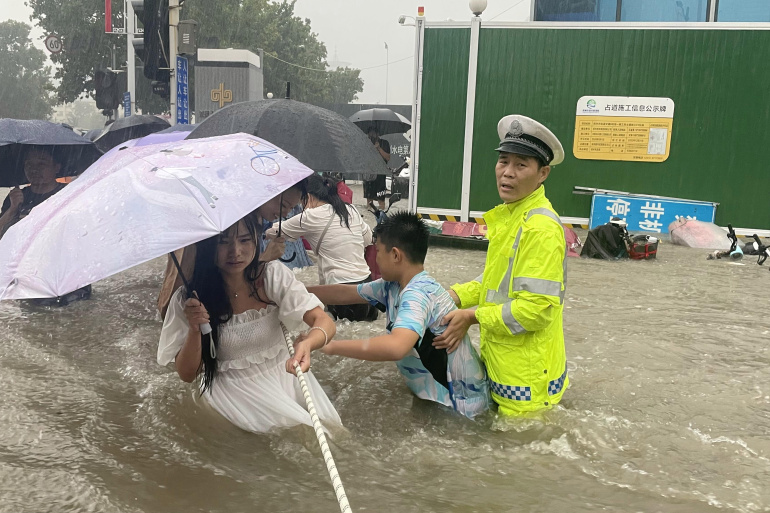 A traffic police officer guides residents to cross a flooded road with a rope during heavy rainfall in Zhengzhou, Henan province, China July 20, 2021. Picture taken July 20, 2021. China Daily via REUTERS ATTENTION EDITORS - THIS IMAGE WAS PROVIDED BY A THIRD PARTY. CHINA OUT.

BEIJING: China has accused British Broadcasting Corporation (BBC) of airing ‘fake news’ pertaining to floods in the country. Beijing on Thursday launched a scathing attack on the BBC, accusing it of broadcasting “fake news” and saying the organisation was “naturally unpopular” over its coverage of devastating floods in central China.

The broadside by the foreign ministry comes after the BBC called on Beijing to put a stop to the harassment of its journalists by nationalists who have accused foreign media of biased reporting.

Days of heavy rain last week sparked record flooding in the central province of Henan that has claimed the lives of at least 99 people.

The BBC said its reporters covering the deluge had been subjected to online vitriol, while other outlets had been harassed on the ground in “attacks which continue to endanger foreign journalists”.

Zhao said the BBC deserved to be “unpopular with the Chinese public” and “there is no such thing as hatred without reason”.

The war of words erupted after a youth branch of China’s ruling Communist Party on Tuesday posted comments online calling on its 1.6 million followers to track the movements of BBC reporters.

A year’s rain was dumped on the city of Zhengzhou in just three days last week, leaving 14 people dead and more than 500 commuters trapped when the city’s subway system flooded during rush hour.

City and provincial officials have faced calls for accountability, with the wife of one of the subway victims telling local media she would sue the metro operator for negligence.