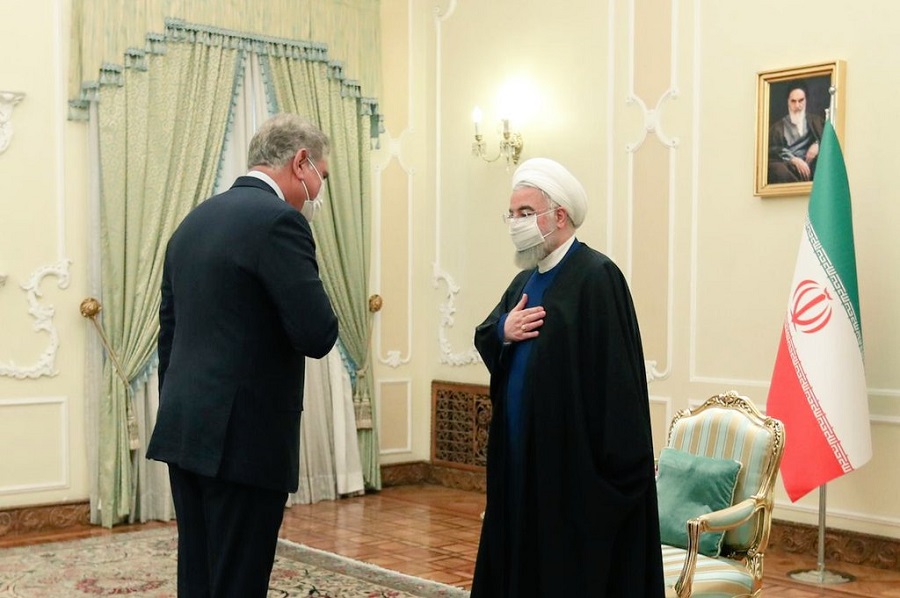 Pakistan’s Ambassador to Iran Rahim Hayat Qureshi was also present at the meeting along with the foreign minister.

On behalf of the President of Pakistan Dr Arif Alvi and Prime Minister Imran Khan, the FM conveyed the message of good wishes and goodwill to President Rouhani and the brotherly Iranian nation.

“The Pakistani leadership pays tribute to the government of Iranian Supreme Leader Sayyid Ali Hosseini Khamenei and President Rouhani for their continued support of the views of Kashmiri Muslims,” Qureshi said.

The foreign minister discussed various ways to further strengthen the long-standing fraternal ties between Pakistan and Iran with the Iranian president.

“The two countries have a cordial, close and strong relationship based on common history, culture, religion and language,” he observed.

He added that in the light of PM Imran’s vision, Pakistan was committed to strengthening bilateral relations with the brotherly country as well as promoting bilateral cooperation in various fields of mutual interest.

The FM, who is on a visit to the Islamic Republic, would also visit the Iranian Parliament where he would meet Speaker Mohammad Bagher Ghalibaf.

According to reports, the foreign minister would also hold delegation-level talks with his Iranian counterpart Javad Zarif on the entire spectrum of bilateral relations with a focus on further deepening cooperation in diverse fields.

Both sides will also sign a memorandum of understanding (MoU) for the opening of border trade centres.

During a meeting with the Pakistani diplomats in Tehran at Pakistan House, Qureshi said that the establishment of trade centres at the Pak-Iran border would not only boost trade between the two countries but also bring economic change in the lives of the residents of border areas.

“Pakistan and Iran enjoy deep-rooted fraternal ties based on common religious and cultural values and civilisation,” the foreign minister said.

Qureshi said his visit to Iran was aimed at strengthening economic and trade relations between Pakistan and Iran.

“Iran has not only appreciated the proposal for the establishment of trade centres at Pak-Iran border but also agreed to implement it soon,” the FM said.

Meanwhile, in a tweet, Qureshi said Iran had lifted restrictions on the import of Kinnow (Orange) from Pakistan which has been in place since 2012.

“The step is a manifestation of further solidifying of bilateral ties between the two countries,” he said.

The foreign minister said the step would be good news for the Pakistani traders and the people linked with its cultivation in the country.

“Pakistan missions to expedite their efforts for the economic diplomacy to enhance the economic prosperity of the motherland,” the FM stressed.