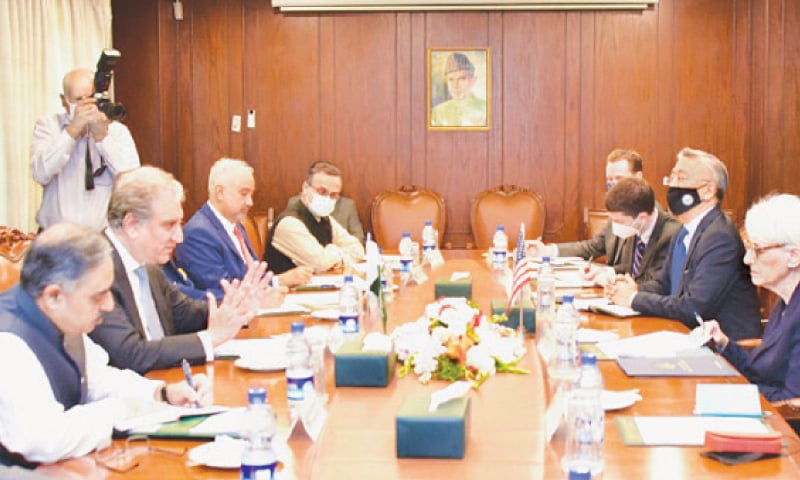 ISLAMABAD: With terrorism topping American concerns about Afghanistan under the Taliban regime, a senior United States official on Friday said Washington would continue its engagement with Islamabad on counterterrorism efforts.

US Deputy Secretary of State Wendy Sherman, speaking to a group of journalists at the American embassy in Islamabad, said: “Indeed we’ll be continuing our counterterrorism dialogue.”

Continuation of discussions on counterterrorism was apparently the only concrete commitment offered by the top diplomat with regard to the future of bilateral ties although several other elements of cooperation were also touched upon during her meetings.

“The United States and Pakistan have a long history of security cooperation and deep personal relationships between our military leaders, both of which are essential components of our counterterrorism efforts,” she recalled.

She did not specify Washington’s expectations from Islamabad regarding counterterrorism cooperation, but broadly said the US would like to ensure “there is no terrorism here in Pakistan, in Afghanistan or in any country in the region or in the world for that matter.”

She was also expected to see Prime Minister Imran Khan, but the meeting could not materialise.

The senior US official, who had reached here after her visit to India, received a rather cold reception because of her remarks about Pakistan in Mumbai that did not go down well here.

At an event in the Indian financial and commercial city, she said Washington no longer sees itself building a “broad-based relationship” with Pakistan and that she was going there with a “specific and narrow purpose” of talks on Afghanistan.

The deputy secretary of state was on her arrival at Foreign Office received by Director General (Americas) Fawad Sher in a departure from the practice of foreign guests being received by their counterparts.

Ms Sherman in her conversation with journalists back pedaled on her remarks in India by recalling the “decades long standing relationship with Pakistan around a broad range of issues”. She mentioned that during her conversations in Islamabad she had also touched upon geo-economics, clean energy, COP 26, cooperation against Covid-19.

However, she conceded that bilateral cooperation was just a sideshow during the visit and the trip was for “predominantly talk(ing)” about the development in Afghanistan and how the two countries were approaching it.

“This particular trip was to really consult deeply on how we see the changing circumstances given the change that has taken place in Afghanistan,” she further said.

Much like other countries the US too is observing the developments in Afghanistan while keeping an eye on the pledges that the Taliban had made with the international community with regard to formation of inclusive government, observing human rights especially of women and minorities, allowing humanitarian agencies to function freely, giving freedom of movement to those wanting to exit the country, and preventing the terrorists from re-establishing their sanctuaries there.

Expressing disappointment over Taliban actions, she said, “Their actions have fallen far short of those public commitments.”

Ms Sherman described her meetings in Pakistan as “constructive and productive.”

Replying to a question about President Biden’s hesitance in speaking to PM Imran Khan, she hinted at the call finally taking place in near future. “We totally understand that every country wants a call from the president, and it’s a pretty much every country may be not every country, and I’m sure it’ll happen sooner rather than later,” she said.

President Biden has not spoken to PM Khan since assuming presidency in January. Contacts at officials’ level have, however, continued for cooperation on Afghanistan.

Foreign Office in a statement on Foreign Minister Qureshi’s meeting with Ms Sherman said that he underlined Pakistan’s commitment to forging a broad-based, long-term and sustainable relationship anchored in economic cooperation, regional connectivity, and peace in the region.

Mr Qureshi also called for a regular and structured dialogue process between Pakistan and US saying it was vital for promoting common interests and advancing shared regional objectives.

He also reiterated his call for international community to undertake positive engagement with the Taliban regime so that urgent humanitarian needs could be provided, frozen Afghan financial resources could be released, and sustainable economy could be established.

The FO said the two sides had at their delegation level talks agreed on close communication and coordination on the situation in Afghanistan.

The military’s public affairs division in a statement said that Gen Bajwa in his meeting with Ms Sherman emphasised the need for meaningful bilateral engagement for an enduring multi-domain relationship between the two countries.