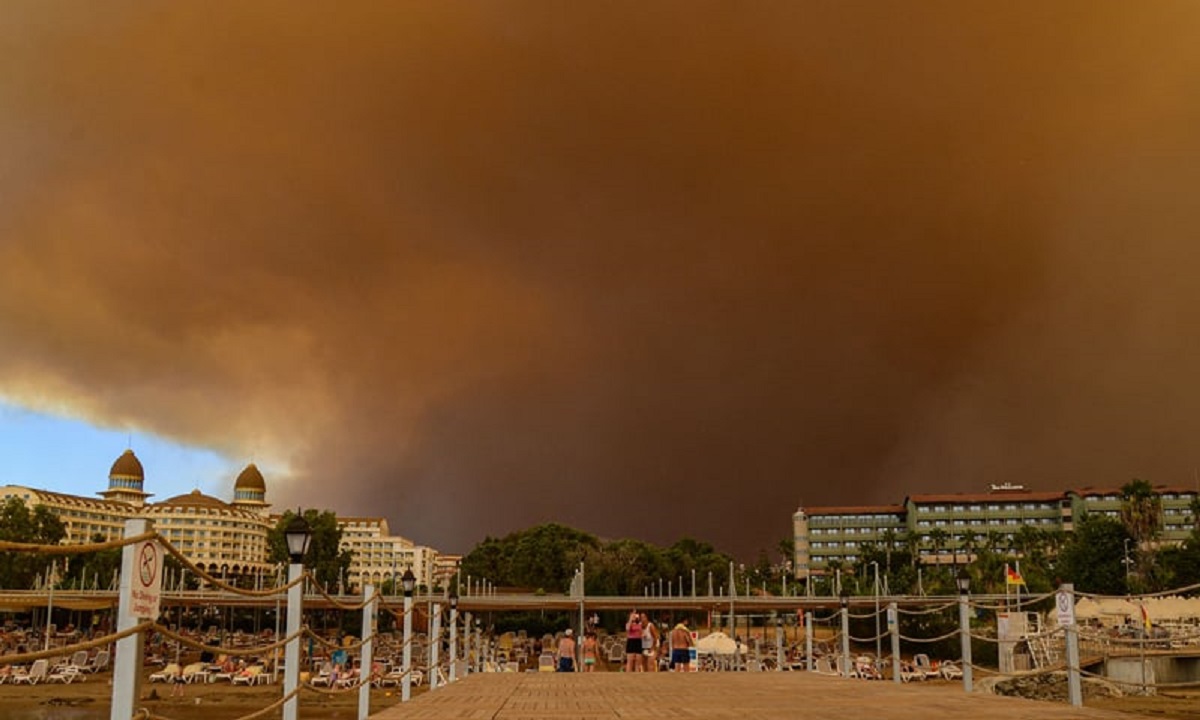 Dark smoke drifts over a hotel complex during a massive forest fire which engulfed a Mediterranean resort region on Turkey's southern coast near the town of Manavgat, on July 29, 2021. - At least three people were reported dead on July 29, 2021 and more than 100 injured as firefighters battled blazes engulfing a Mediterranean resort region on Turkey's southern coast. Officials also launched an investigation into suspicions that the fires that broke out Wednesday in four locations to the east of the tourist hotspot Antalya were the result of arson. (Photo by Ilyas AKENGIN / AFP)

Four people were reported dead on Thursday and more than 180 injured as thousands of firefighters battled huge blazes spreading across the Mediterranean resort regions of Turkey’s southern coast.

Officials also launched an investigation into suspicions that the fires that broke out on Wednesday in four locations to the east of the tourist hotspot Antalya were the result of arson.

Turkey’s disaster and emergencies office said three people were killed — including an 82-year-old who lived alone.

a 25-year-old man died in Marmaris while trying to bring aid.

The fires first emerged across a sparsely populated region about 75 kilometers east of Antalya — a resort especially popular with Russian and other eastern European tourists.

But they were creeping closer on Thursday to sandy beaches dotted with hotels and resorts.

Images on social media and Turkish TV showed residents jumping out of their cars and running for their lives through smoke-filled streets lit up by orange flames.

The heavy clouds of smoke turned the sky dark orange over a beachfront hotel complex in the town of Manavgat.

At least 183 people were hospitalized.

Agriculture Minister Bekir Pakdemirli said a hotel was also being evacuated near the tourist city of Bodrum — some 300 kilometers west of Antalya — as new fires broke out across the southern coast.

Pakdemirli said a total of 53 forest fires were reported in the country on Wednesday and Thursday, but that most of them had been brought under control. Three planes, 38 helicopters, and some 4,000 firefighters were deployed to battle the blazes, he said.

The country’s AFAD disaster agency said that 36 wildfires had been contained, but firefighting efforts for the remaining 17 continued, with more than 140 people requiring treatment or suffering property damage.

Buildings including a hotel in the Aegean resort of Marmaris were evacuated due to the blaze, state broadcaster TRT Haber said. Footage showed two separate fires near residential areas in the Aegean summer hotspots of Bodrum, where another hotel was evacuated, and Didim.