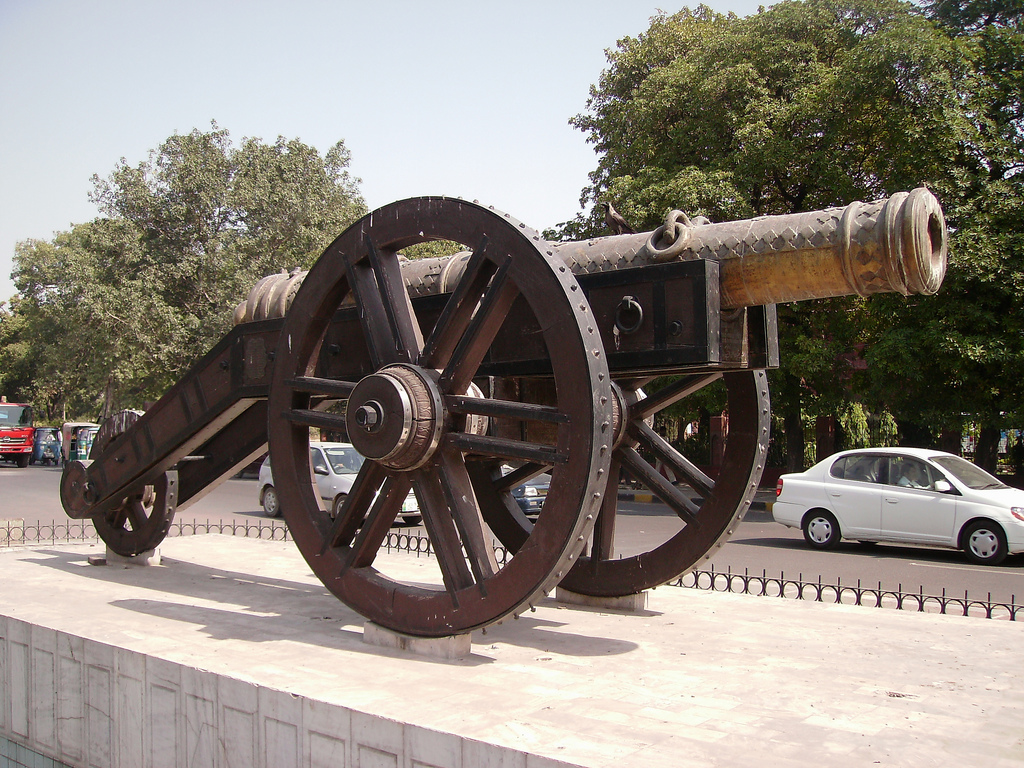 On a raised platform on Shahrah-e-Quaid-i-Azam (the Mall Road) in Lahore between Punjab University (Old Campus) and the Museum is placed the famous Zamzama Gun which is also known as Bhangian Wali Tope and Kim’s Gun.

The name Zamzama was given to this gun when it was cast. Literally, the meaning of Zamzama is “hammer” or “applauder” but the word also means a “lion’s roar”.

It is known as Bhangian Ki Top or Bhangiann Wali Tope after the name of Hari Singh Bhangi who made war on Khwaja Obaid and captured it in 1762 AD.

According to Rudyard Kipling, an English lad Kim used to play on the platform which was further adorned for placing the gun, so he had called it “Kim’s Gun”.

Hundreds of thousands people pass it every day but not many have ever bothered to know about its history which is, quite interestingly, inscribed in Persian around its muzzle and further up around the middle of the barrel. The inscriptions include its date of manufacture, names of the monarchs and the technicians along with verses in Persian were moulded with floral patterns.

Around the muzzle it is inscribed: By order of the Emperor Durri Dowran Shah Wali Khan, the Wazir made this gun, named Zamzama, the capturer of strongholds, the work of Shah Nazir.

On the back of the gun in the middle is the following inscription:

In the reign of the King possessing dignity like Faredun, Dispenser of justice, robed in equity.

The pearl of the age, Ahmad Shah,

King, the conqueror of thrones, dignified as Jamshed, An order was issued to the grand Wazir,

From the threshold of his Majesty, To have cast with every possible skill,

A gun terrible as a dragon and huge as a mountain, His heaven enthroned Majesty’s servant,

In order to accomplish that grand enterprise, Called together a number of master workmen, Till, with consummate toil,

Was cast this wonderful gun Zamzama.

The destroyer even of the strongest of heaven

Has at last appeared under the auspices of His Majesty, I enquired of reason for the date of this gun;

“If thou wilt give thy life in payment, I will disclose to these the secret”.

I agreed, and he replied;

“What a gun; a weapon like a fire raining dragon”.

Zamzama gun is 14 feet 4 ½ inches in length, exclusive of the casemate, the aperture of the bore being 9 ½ inches. It was placed in this position on the occasion of the visit of Duke of Edinburgh to Lahore in February 1870. This ancient piece of ordnance, one of the largest specimens of casting in India, was cast at Lahore, with another gun of the same size, in 1757 AD by Shah Nazir, under the directions of Shah Wali Khan, Prime Minister of the Abdali King Ahmad Shah Durrani.

It is made of copper and brass obtained by jazia (capitation tax levied by Muslims from infidels), a metal vessel having been taken from each Hindu house in Lahore. Ahmad Shah used it in the famous battle of Panipat in 1761.

After the battle, on his way back to Kabul, he left it in Lahore with his Governor Khwaja Ubed, as the carriage for it to Kabul was not ready. The other gun he took along, but it was lost in passage through Chenab.

In 1762, Hari Singh Bhangi made war on Khwaja Ubed and attacked him in the village of Khwaja Said, two miles from Lahore (now within Lahore), where the Mughul Governor had his arsenal, and seized his artillery, arms and ammunition.

Among the artillery pieces captured on this occasion, Zamzama thenceforward came to be called the Bhangi’s tope. After that it remained with Sukerchakias, Chathas and Ranjit Singh who used it for different campaigns of Daska, Kasure, Wazirabad and Multan.

In 1818, it was declared unserviceable and placed at Delhi Gate until 1870, when it was moved to the present location.

On the fall of Lahore in 1764, Lehna Singh and Gujjar Singh Bhangi seized Zamzama from Shah Burj where it lay unmounted.

Between 1764 anf 1772, Sukerchakia chief carried it first to his

camp and then to his fort at Gujranwala. It was subsequently captured by Chathas who carried it to Ahmed Nagar near Wazirabad.

The Chathas who were always fighting with Sukerchakias recovered it in 1772 and then removed it to Rasul Nagar, then known as Ram Nagar. Sardar Jhanda Singh Bhangi having captured it in the following year, after his return from Multan, carried it to Amritsar where it remained in Bhangi fort till 1802.

In 1802, Ranjit Singh had expelled Bhangis from Amritsar and taken over its possession. Ranjit Singh employed it in his campaigns of Daska, Kasur, Sujjan Pur, Wazirabad and Multan.

By 1818, the gun became so dilapidated it was declared beyond repair and placed at Delhi Gate in Lahore.

After the first Sikh war, it was handed over to the British as part of a subsidiary treaty signed at Lahore on 6 March 1846 between the British and the Sikh State. Also under the treaty, at the earnest solicitation of the Sikh Darbar, the Governor General consented to leave a British force in garrison in Lahore for the reorganization of the Sikh army.

In 1870, it was placed on the Mall Road in front of the Lahore Museum and the Punjab University (Old Campus) on the occasion of visit of His Royal Highness the Duke of Edinburgh to Lahore in February 1870.

The Zamzama Gun has not roared since then and is lying silently looking over the passers-by who have little inkling of its historic significance.

The writer is Lahore-based Freelance Journalist, Columnist and retired Deputy Controller (News), Radio Pakistan, Islamabad and can be reached at zahidriffat@gmail.com.