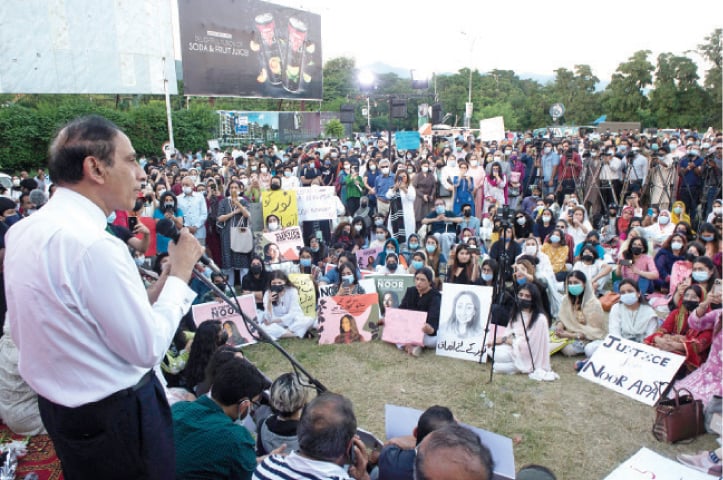 Noor Mukadam case looks set to become yet another exemplar of the chronic problem of investigating officers failing to build a case that will stand judicial scrutiny.

As the additional district and sessions judge (ADSJ) commenced the trial of Zahir Jaffer, his parents and other accomplices in the gruesome murder in the elite sector of Islamabad, the report (challan) submitted by the police is marred by substandard investigation, which may benefit the suspects.

The investigation report of the police prepared under section 173 of the Criminal Procedure Code (CrPC) is a set of documents that is presented by the prosecution to substantiate allegations against the accused persons.

Briefly speaking, the police challan mainly focused on one single point – lack of cooperation – of the about a dozen co-accused led beheading of Noor Mukadam as her life-saving opportunities due to active connivance of the accomplices of principal accused Zahir went in futility.

The challan stated that Noor tried to escape twice from the illegal captivity of Zahir Jaffer. However, her attempts were thwarted due to the active collusion of the security guard and gardener.

The report says Zahir Jaffer contacted his father four times over phone while he kept Noor captive and murdered her. His parents knew about the illegal detention and the worsening situation at their home but they never informed the police.

Even after the culprit had beheaded the girl, his father Zakir Jaffer showed no remorse and told the murderer, “You needn’t worry, I can handle this. I am sending the people to rescue you and to dispose of the dead body”.

The police investigation mainly relied upon the confessional statement of Zahir Jaffer, in which he confessed to killing Noor stating that they quarreled after the victim rejected his marriage proposal. She threatened to file a complaint against Zahir with the police.

As per the statement, Zahir informed his parents of this incident and ordered the domestic staff not to allow anyone to come inside or let her go outside from the house. This was why the gatekeeper and gardener prevented her attempts to escape.

Referring the Call Detail Record (CDR), the challan stated that before killing and beheading Noor, Zahir made calls to his parents at 2:21 pm, 3:00 pm, 6:35 pm and 7:29 pm. “Noor Mukadam’s murder could have been averted had Zahir Jaffer informed the police in time”.

The report says Zakir Jaffer sent five therapy work staff to his F-7/4 residence – the crime scene of the gruesome murder – to conceal the evidence and the dead body of deceased. However, when they tried to enter to the room, Zahir got confused and attacked them.

One worker Amjad Mehmood was injured in the ensuing struggle and had to seek medical help. However, the injured worker lied to the hospital administration and did not register the incident in the medical slip. He mentioned reason for his injury was a road accident.

On 19 July, Noor’s farther Shaukat Mukadam went to cattle market to buy sacrificial goat in the afternoon and found Noor was not at home upon return. His wife tried to call Noor, but her phone was found switched off.

Later on, they received a call later from Noor, who told them she was going Lahore with some friends for a couple of days. Zahir Jaffer also phoned Shaukat Mukadam, saying Noor was not with him.

However, at about 10 pm on 20 July, he received a call from Kohsar Police Station and was informed that his daughter has been killed. He went to the house and found Noor’s beheaded dead body.

Moreover, the police have included 18 witnesses, which included constables and the doctors who conducted autopsy of Noor Mukadam.

It is said that the police did not make effort to investigate the crime in the broader prospect and confined it within the boundary wall of Jaffer family. For example, a criminal law expert said that the investigation officer should have recorded the statement of common friends of Zahir Jaffer and Noor Mukadam who gathered outside the house.

The low paid therapy worker Amjad, who was the eyewitness of the crime who got injured by Zahir Jaffer’s knife was taken into custody and has been booked as an accomplice for not reporting the reason of his injury in the medical slip of the hospital.

Subsequently, since almost all the witnesses are government officials, therefore, the defence counsel may take plea that these

The legal experts opined that the police investigation was not up to the mark despite the fact that the Prime Minister Imran Khan has personally assured the nation of justice in the Noor Mukadam’s murder case.

Despite the high profile case, the investigation was conducted by an inspector level officer who rose to the present rank about three decades ago and is now nearing retirement.

However, the ‘inefficiency’ may not be the only reason for substandard investigation in the high profile cases, as there are number of other variables that contributed in flawed investigation.

In the report, the IG said that the investigation officer (IO) of a case had to pay PKR 5,000 parcel fee from his own pocket to send evidence to a forensic laboratory for analysis.

Similarly, he said, an IO paid PKR 15,000 for preparation of a sketch of a suspect. “Such a sketch should be prepared within two days.”

The most alarming aspect of the system is that an investigation officer receives a puny PKR 300 to probe a serious crime.

He says underpaid investigating officers do not have sufficient resources to visit a crime scene when a crime is reported, let alone send the sealed samples and arrange payment of the fee to a laboratory for conducting forensic examinations.

He however expressed hope that the steps taken by the incumbent government for swift and inexpensive administration of justice will modernize the prosecution and would enhance capabilities of the investigation officers.