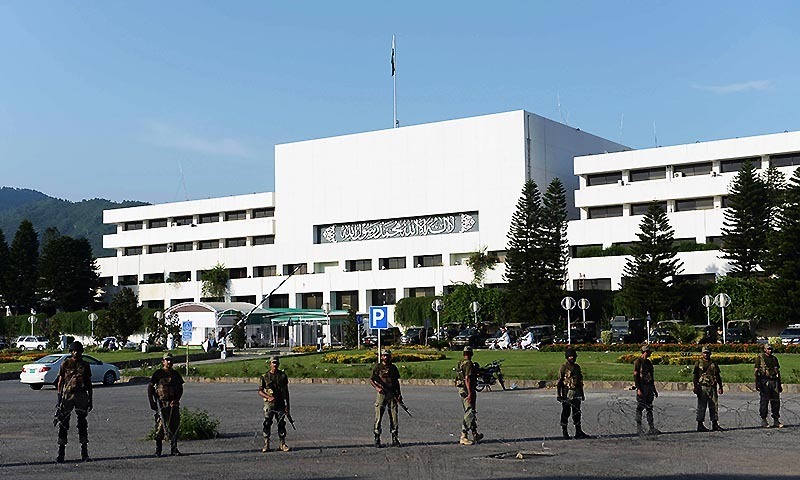 Pakistani Rangers cordon off the Parliament during an ongoing protest by followers of Imran Khan and Tahir-ul-Qadri in Islamabad on August 27, 2014. Pakistan's embattled prime minister said August 27 he would not cave in to protests demanding his resignation, striking a defiant note in his first major speech since the crisis erupted two weeks ago. Thousands of Khan's and Qadri's followers have been camped outside parliament since August 15 demanding Sharif quit, claiming the election which swept him to power last year was rigged. AFP PHOTO/Farooq NAEEM

While the lawyers’ bodies are making hue and cry over the criteria for the appointment of judges to the Supreme Court and a large segment of society wants across the board accountability, a parliamentary panel has further fuelled the debate by observing the existing system is ‘faulty’ and recommending legal amendments to drastically change the framework for the appointment and accountability of supreme court justices.

Recently, the lawyers staged protests and passed resolutions against supersession of four judges of the Sindh High Court (SHC). The Judicial Commission of Pakistan (JCP) again considered Lahore High Court (LHC) Justice Ayesha Malik for a vacant position of the Supreme Court whereas she is at number four in the LHC’s seniority list.

The bipartisan Parliamentary Commit- tee on Appointment of Judges has approved for observation of seniority as central consideration for appointment of judges to the apex court.

The committee during a recent meeting consented to the amendments in the bill tabled by its chairman Farooq H Naek that to limit the powers of the President to appoint an ad-hoc judge of the Supreme Court and linked it with the parliamentary nod.

Under the proposed amendment to Article 175 A (3), the parliamentary panel recommended that the elevation of the judges to the Supreme Court be made in accordance with the seniority of the judge, determined with reference to their date of appointment as a judge of the High court.

A few years ago, the appointments in the superior judiciary – High Court and the Supreme Court – were made through a multi-stage process in which executive and the judiciary selected the lawyers and sessions judges for their appointment as judges high courts judges and generally the Chief Justice of High Court used to be elevated in the apex court.

Under the amendment in Article 175-A, the Parliament established the Judicial Commission of Pakistan (JCP) for nominating the judges and the Parliamentary Committee confirmed these nominations.

According to Senator Mian Raza Rabbani, who is considered the lead author of the 18th Constitutional Amendment, the Parliament has changed the mechanism in order to institutionalize appointments to the superior judiciary.

He said that earlier it was the prerogative of the President and the Chief Justice. However, the amendment of Article 175-A formed two institutions: Judicial Commission of Pakistan and Parliamentary Committee for Appointment of Judges. Hence the roles of individuals have been minimized.

However, legal experts think that despite the creation of a collegiate body under Article 175-A of the Constitution, it is the Chief Justice of Pakistan who exercises considerable influence when it comes to the selection of the judges to superior judiciary.

However, at present, the CJP of the high court proposes the names for judges’ slots. The Judicial Commission of Pakistan headed by CJP examines the names and these are forwarded to the Parliamentary Committee.

It may be mentioned that after the 18th Amendment the then government introduced the 19th Amendment to minimize the role of Parliamentary Committee in order to avoid the wrath of the then CJP Iftikhar Mohammad Chaudhry.

Justice Chaudhry through a judicial order passed in the case of a judge who was not confirmed by the Parliamentary Committee minimized the Parliament’s role and virtually made the committee a mere rubber stamp.

The Parliamentary Committee is now trying to reclaim its role in the appointment of judges. The committee headed by Farooq H Naek has examined and proposed certain changes in Article 175-A and Article 209. One of these is related to the improving system of appointment of judges and the other deals with their strict and across the board accountability.

According to Mr Naek, the law for appointment and accountability of the judges must be revisited.

The Committee also approved an amendment to Article 209 of the Constitution which is related to disciplinary proceedings against a sitting judge. It proposed that a reference on account of misconduct against the Judge of the Superior Judiciary will be decided by the Supreme Judicial Council within 90 days.

At present there is no timeframe for disposal of a complaint or reference against the judges of the superior courts and according to former Chief Justice of Pakistan Anwar Zaheer Jamali, around 90 percent of the complaints filed against the judges of superior judiciary had become outdated because the Supreme Judicial Council (SJC) had been inactive for the past few years.

He said that a majority of references filed against the conduct of the judges of the superior courts under Article 209 of the constitution had become infructuous since most of those judges had retired after completing their terms in office.

Under Article 209, the SJC may initiate proceedings on a reference against any judge on account of misconduct.

According to the article, if the SJC after proceedings “reports to the president that it is of the opinion that the judge is incapable of performing the duties of his office or has been guilty of misconduct and that he (judge) should be removed from office”.

The matter related to the judges’ appointment is still under consideration as the Parliament not only wants to take back powers in the appointment of judges but also it is trying to exercise a more effective role.