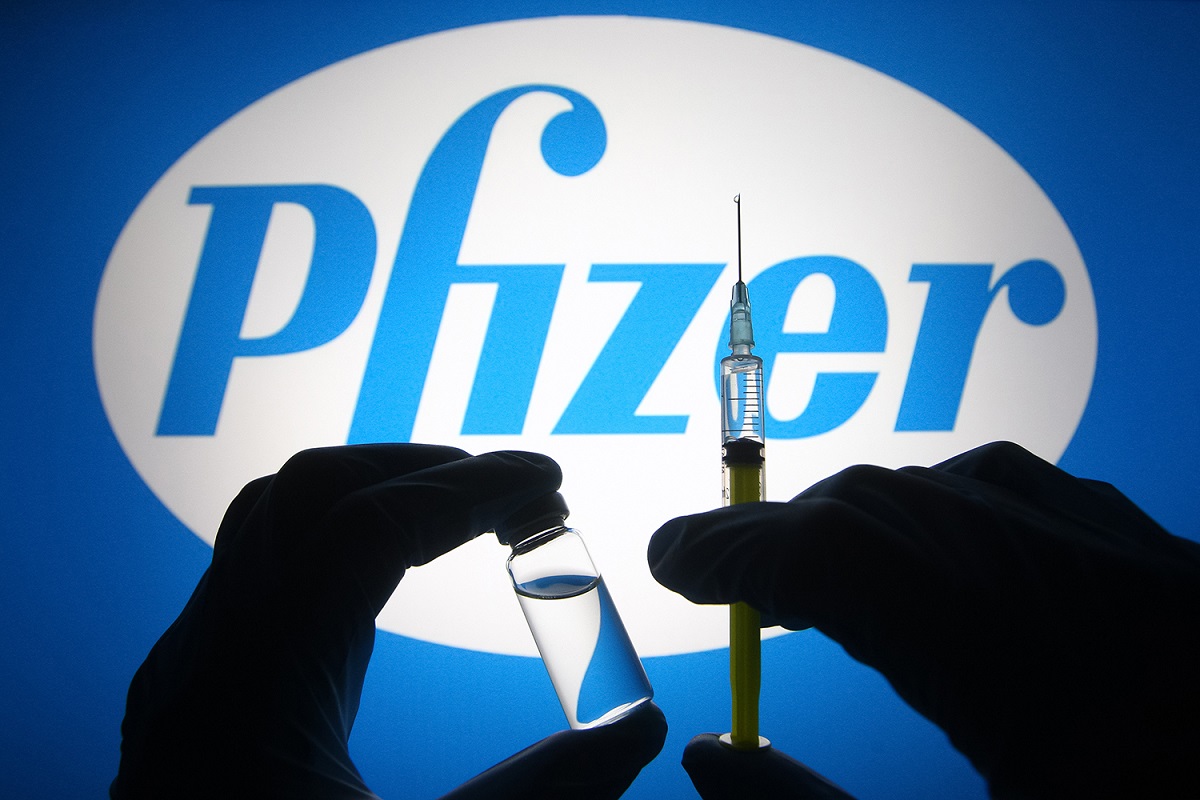 UKRAINE - 2021/04/27: In this photo illustration, silhouette of hands in medical gloves hold a medical syringe and a vial in front of Pfizer logo of an US pharmaceutical industry company. (Photo Illustration by Pavlo Gonchar/SOPA Images/LightRocket via Getty Images)

ISLAMABAD: Multinational pharmaceutical companies have minted billions of dollars in just first six months of 2021 mainly because of sale of their Covid vaccines and other coronavirus-related products. Pfizer, BioNTech, and Moderna have reported $25 billion income from Jan-June 2021.

For the full year (2021), these companies have revised upward their projected income because of growing demand of Covid vaccines and other related medical products throughout the world. Hence, in the second half of 2021, their earnings will be much greater than first six months of the calendar year.

Germany’s BioNTech, maker with partner Pfizer of the pioneering mRNA jab, raised its vaccine revenue forecast for 2021 in its latest earnings report on Monday.

US firm Pfizer and BioNTech got a headstart over their competitors because they were the first in the western world to announce positive results from clinical trials of their vaccine last year and got regulatory approval from the governments and the World Health Organisation. They were also first to get authorisation from US and European Union regulators to sell their shot.

Pfizer is leading the market with highest income than all of its international rivals. Pfizer has earned more than its competitors, raking in $10.8 billion in the first half of this year.

Interestingly, the US company has raised its outlook for 2021, expecting to earn $33.5 billion in sales for the full year.

BioNTech today reported revenues of $8.54 billion 7.3 billion euros in the first half. Unlike its larger partner, the company’s only product on sale is the coronavirus vaccine. BioNTech expects vaccine revenues to reach 15.9 billion euros for the full year, up from a previous estimate of 9.8 billion euros.

US startup Moderna is the only other firm to have produced an authorised mRNA vaccine so far.

Messenger RNA technology works by providing human cells with the genetic instructions to make a surface protein of the coronavirus, which trains the immune system to recognise the real virus.

Like BioNTech, the company’s only product in the market is the Covid vaccine. The vaccine requires two shots taken weeks apart. Moderna reported turnover of $5.9 billion in the first six months of the year. It expects to make $20 billion in revenues thanks to the vaccine this year.

British pharmaceutical giant AstraZeneca and US firm Johnson & Johnson had their vaccines approved by the EU later than their rivals.

AstraZeneca’s vaccine is one of the world’s leading vaccines and has been vital in the UK’s speedy vaccination drive — which enabled England’s economy to fully reopen this month.

But it has not been approved by US drug regulators. Johnson & Johson’s vaccine — made by Janssen, its Belgian subsidiary —has the advantage of being administered with one shot instead of two like those of its rivals.

AstraZeneca and J&J do not use mRNA technology. They both made more traditional viral vector vaccines, which use genetically-engineered version of a common-cold causing adenovirus as a “vector” to shuttle genetic instructions into human cells.

The two companies also vowed to sell their vaccines at cost during the pandemic, meaning they would not earn profits from them. They are cheaper than the Pfizer/Bi- oNTech and Moderna jabs, which reflects in their revenues.

AstraZeneca’s Covid jab generated $1.2 billion in sales in the first six months of the year. J&J reported $264 million in sales and expects to make $2.5 billion for the full year. AstraZeneca has not provided a detailed full-year estimate.