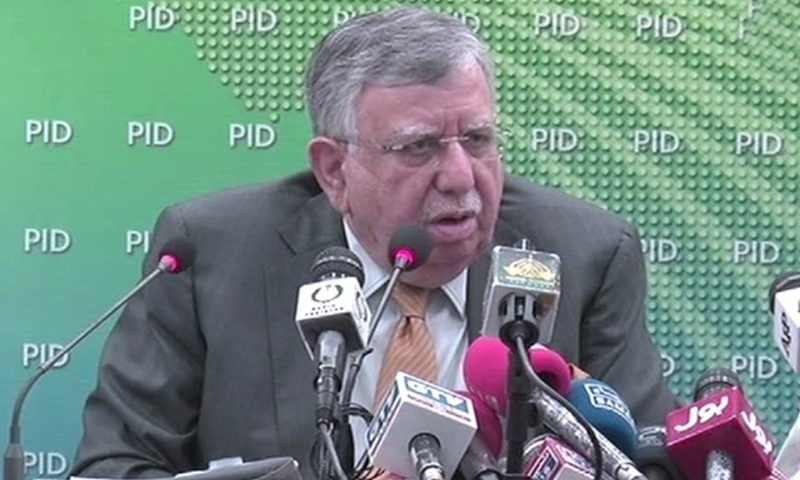 Speaking at a hurriedly called news conference along with prime minister’s special assistant Jamshed Iqbal Cheema and Minister of State for Information Furrukh Habib, the finance minister said the government would immediately reduce the prices of vegetable ghee, sugar and wheat across the country by reducing taxes and providing cash subsidies to 40-42 per cent population at the bottom.

Though sounding anxious over questions about his own future in the government in the remaining 25 days of his constitutional tenure ending October 15 and those challenging the prices quoted by the government, the finance minister rejected uncertainties about his portfolio. “I am not going anywhere. I trust the prime minister who has promised to make me a senator,” he said.

Responding to a question, the minister said the overall revenues had improved 45pc by exceeding the target by 24pc primarily because of increasing imports — a phenomenon showing economic growth. Initial estimates also suggest 160pc increase in cotton output so far, showing signs of agriculture uptick, besides large-scale manufacturing — all indicators of growth.

“However, my concern is that it should not overheat to a level that creates problems for the exchange rate and balance of payment,” the minister said, adding that it should also be kept in mind that prices were the highest globally in 10 years because of production and logistic problems and Pakistan could not stay aloof.

Therefore, he said, the government had decided to impose regulatory duties and 100pc cash payments for opening of letters of credit for non-essential luxury imports. He did not disclose the import items that would come under these taxation measures, but said these steps were important to cool down the heating economy.

He said some quarters were suggesting that GDP was heading beyond 5pc growth and “we want to control it; we don’t want to jump to 6-7pc growth quickly that could be problematic and unsustainable”.

Talking about currency devaluation, the finance minister said pressures built up owing to higher imports as oil and LNG prices increased significantly in six months, automobile imports, dollar outflows to Afghanistan instead of inflows in the past and perceptions that speculators and importers also exploited.

However, the real effective exchange rate (REER) was almost close to market rate with about Rs2 per dollar difference.

Responding to a question, Mr Tarin said the issues with the IMF remained unchanged as the two sides had agreed before the budget to go into recess and get back with first quarter performance as the government committed to delivering the revenue target of Rs5.8 trillion and addressing circular debt with alternative means instead of increasing taxes on those already taxed and raising energy prices that would reverse the efforts in hand to support the poor.

The minister said the government performed well on revenues and the flow of circular debt had also been scaled down. “Now that three months of recess were over, we would sit together over the next few days and request them [IMF] to allow us to continue working on our directions. There are no pre-conditions and prior actions. We stand by our principled stance and will hold negotiations. Only time will tell how the two sides negotiate,” he added.

Mr Tarin said the government had decided to immediately reduce vegetable ghee/oil price by Rs45-50 per kg to Rs290 from Rs340 and that of wheat flour to Rs55 per kg. He said the government’s decision to increase wheat release price to Rs1,950 per 40kg from Rs1,475 had become effective and under an arrangement flour mills would provide 20kg bag for Rs1,100.

Also, sugar will be available across the country at Rs89.75 per kg to provide relief to 40-42pc population. He said the government would next month provide cash subsidy on wheat flour, sugar, ghee and pulses.

The minister said the magistracy system abolished by the Musharraf government had created a lot of problems and he had asked the prime minister to bring that mechanism back, otherwise subsidies, tax relief and strategic reserves of essential commodities would not deliver the desired results. The prime minister had agreed to ensure it within a couple of months, he added.

SAPM Cheema chipped in with selected numbers to claim that Pakistan is the cheapest country in the world under the PTI government and argued that in dollar terms prices of petroleum products, wheat and sugar were the cheapest when compared with the PML-N and PPP governments of the preceding decade.

When challenged with the actual prices in the market and comparable prevailing numbers in India, Mr Tarin took it personal, saying he would not allow suggestions to prove him wrong with general statements and he could ask the team that prepared these numbers to compare again.

Mr Tarin said that despite global price spiral, inflation had declined in Pakistan because of the government’s balanced policies. He said food inflation had also gone down over the past two years. He said the overall prices of essential food commodities had increased in the world as the prices of sugar went up by 80pc from $240 per tonne in 2018 to $430 and palm oil by 58pc from $760 per tonne to $1136, while in Pakistan the prices of cooking oil increased by only 33pc.

The minister said that despite a hike in prices of petrol, diesel and other petroleum products in the international market, prices in Pakistan were very low compared to regional countries. He said the government had reduced petroleum levy and sales tax to provide relief to the masses.

In addition, he added, the government would make scientific engineering process to analyse profits in the supply chain and squeeze the role of middlemen administratively. The government was also building strategic reserves of pulses and onions to help streamline prices, he said, adding that the government would build commodity warehouses and cold storages so that farmers and purchasers are linked directly without involving middlemen.

The minister said the Competition Commission of Pakistan had been directed to take measures against cartelisation of ghee manufacturers. He said the government was working on initiatives to enhance income and affordability of people, adding that Kamyab Pakistan programme would be launched by the end of this month to bring up the lower segments of society.