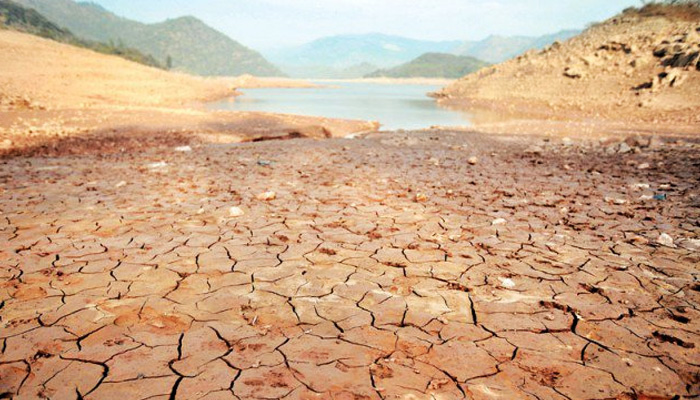 With political and economic instability looming large in the county, little attention is being given   to   Pakistan’s intensifying water crisis, which has the potential to disrupt lives and livelihoods of millions. The United Nations Development Programme (UNDP) has categorically stated that Pakistan will dry up by 2025 if no urgent action is taken. Today, accelerated climate change is only adding fuel to the fire.

Accelerated climate change is intensifying Pakistan’s water woes. According to the Hindu Kush Assessment report, around one-third or 33 percent of Pakistan’s glaciers will be depleted by year 2100 even if global warming is held at 1.5 degrees Celsius. That is about 14,000 glaciers. It is important to understand the glaciers give life to rivers – an important source for freshwater availability in the country. With glaciers melting at an alarming rate, droughts are likely to intensify in many parts of the country. The worst hit will be areas where the poor and vulnerable reside.

Many rural areas of the country heavily rely on groundwater sources but Pakistan’s groundwater have been found to contain alarmingly high levels of arsenic. Up to 60 million people in Pakistan, especially Sindh and Punjab, are at risk from the deadly chemical arsenic.

Pakistan’s population boom is putting more stress on Pakistan’s shrinking per capita water availability. In Karachi, the country’s biggest financial hub – more than 90 percent of the water supplied is contaminated in some way. With extreme droughts predicted in the coming decades and our population expected to become the 4th largest in the world by 2030, do we have a comprehensive plan to counter this looming threat?

Women in rural areas are the most affected by unavailability of clean drinking water which automatically disempowers them socially and economically. Women take the primary burden of collecting water for their families. In water scarce areas, young girls and women spend the entire day fetching water for their families. In rural Pakistan, they walk for a good 2-4 km and wait in line for hours for their turn to collect water, an effort requiring six to eight hours each day. These young girls should be in school, not collecting water the whole day.

Pakistan’s per capita water availability has dropped from 5060 cubic meters per annum in 1951 to 908 cubic meters now. We have the world’s fourth highest rate of water use. Pakistan’s water intensity rate – the amount of water used per unit of GDP – is the world’s highest. This suggests that no country’s economy is more water-intensive than Pakistan’s.

Pakistan must revamp its agriculture sector which still remains outdated with the latest technology. We spend 80 percent of our fresh water resources on crops like cotton, rice and sugarcane that contribute only 4 percent to our GDP. We must urgently shift towards drip irrigation and eco-friendly agriculture solutions.

In the past, there have been debates of introducing desalination plants to fulfil our rising water demands. However, debate on this crucial alternative seems to have disappeared in thin air.

Another piece of the puzzle could be desalination, the process of purifying saline water into fresh water. Desalination plants can reduce salt levels from seawater to make if safe for human consumption. Considering that Pakistan is on course to face severe water scarcity by 2025, it is crucial to develop desalination technologies to meet water needs. The Middle East has been a leader in desalination so far. Saudi Arabia, United Arab Emirates,

Kuwait, and Israel rely heavily on desalination as a source for clean water.

Given that Pakistan is blessed with more than 700 km of coastline and our population expected to balloon another 50 percent by 2050, there is no reason why we should not invest in desalination.

Pakistan must also move towards building small, uncontroversial dams. Small dams are extremely important to store and conserve water for increasing irrigation and drinking water sources and improving socio-economic conditions. According to the World Bank, Pakistan has the potential to build another 750 small dams to meet water requirements of growing local and regional population. If we look in the region Sri Lanka has constructed some 12,000 small dams while India has built 19,000 small dams. What is Pakistan waiting for? In the past, the World Bank and Asian Development Bank have already shown interest in financing small dams in Pakistan.

What is most crucial is that Pakistan must start a country-wide social awareness programme on water security. Water conservation should be the starting point for Pakistan’s quest to manage our resources more efficiently. Every citizen must realise that conserving water is our moral and ethical responsibility, and that when we waste water, we deprive many others of their right to use that water for fulfilling their basic necessities.

Access to clean water is a basic human right. Our collective future depends on ensuring its sustainability today. Water, in essence, represents life. Only by saving water can we save lives and keep our part of the world hospitable to life.