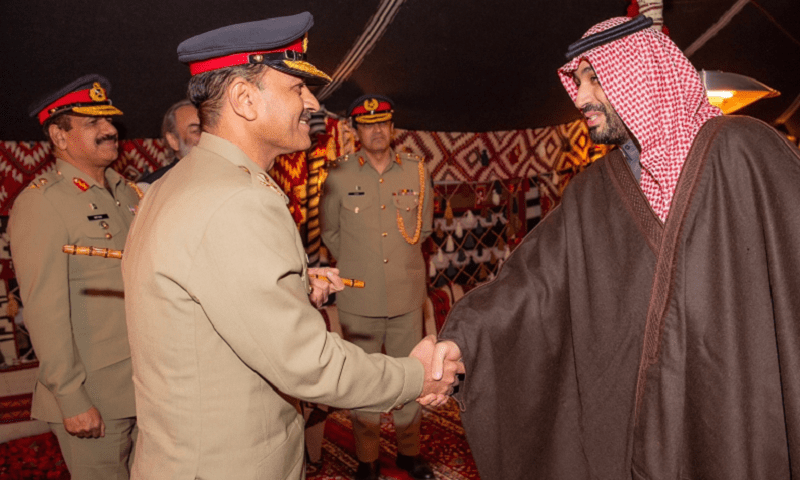 “His Royal Highness Prince Mohammed bin Salman bin Abdulaziz Al Saud, Crown Prince and Prime Minister, has directed to study augmenting the Kingdom of Saudi Arabia’s investments in the sisterly Islamic Republic of Pakistan which have previously been announced on August 25, 2022, to reach $10 billion,” it said.

The crown prince also directed the Saudi Development Fund to study increasing the amount of the deposit provided by the Kingdom of Saudi Arabia in favour of the Central Bank of Pakistan which have previously been extended on December 2, 2022 to hit a $5 billion ceiling,” the report said.

The move, SPA stated, confirmed Saudi Arabia’s position on supporting the economy of Pakistan and its “sisterly people”.

The development was reached within the framework of the existing communication between Prince Salman and Prime Minister Shehbaz Sharif, it added.

Today’s announcement comes a day after Chief of Army Staff General Asim Munir — who was on a week-long official visit to Saudi Arabia and UAE — held a meeting with Prince Salman in Madina and discussed ways to improve bilateral ties between the two countries.

In 2021, the SBP had signed an agreement with the SFD to receive $3bn, which would be placed in the central bank’s account with an aim to improve its foreign exchange reserves.

Subsequently, in September last year, the SFD had confirmed the rollover of a $3bn deposit for one more year. The deposit was set to mature on Dec 5, however, on Dec 2 Saudi Arabia had extended its term.

In the last week of October 2021, Saudi Arabia had agreed to revive its financial support to Pakistan, including about $3bn in safe deposits and $1.2bn worth of oil supplies on deferred payments.

The agreement was reached during the visit of former prime minister Imran Khan to the kingdom the same month.

The Saudi king had in August last year directed his government to invest $1bn in Pakistan “in confirmation of the kingdom’s support of the Pakistani economy” and its people.

The directive from King Salman bin Abdulaziz had come a day after the Qatari government said it would invest $3bn in Pakistan.

Saudi Arabia and the UAE had earlier indicated to provide $1bn each in oil purchase financing.

Later in October, Prime Minister She­h­­baz Sharif said Saudi Crown Prince Mohammed bin Salman bin Abdu­laziz Al-Saud would soon be visiting Pakistan during which he would anno­unce a $10bn investment for est­a­blishing an oil refinery in the country. However, the planned visit was later postponed for unexplained reasons.

The country is currently in the midst of a severe cash crunch, with foreign exchange reserves in the State Bank of Pakistan’s (SBP) depleting to an eight-year low of $5.576 billion during the week ended on Dec 30, 2022.

This decline left no space for the government to pay back its foreign debts without borrowing more from friendly countries.

During the week the SBP foreign exchange reserves saw an outflow of $245 million for external debt repayments.