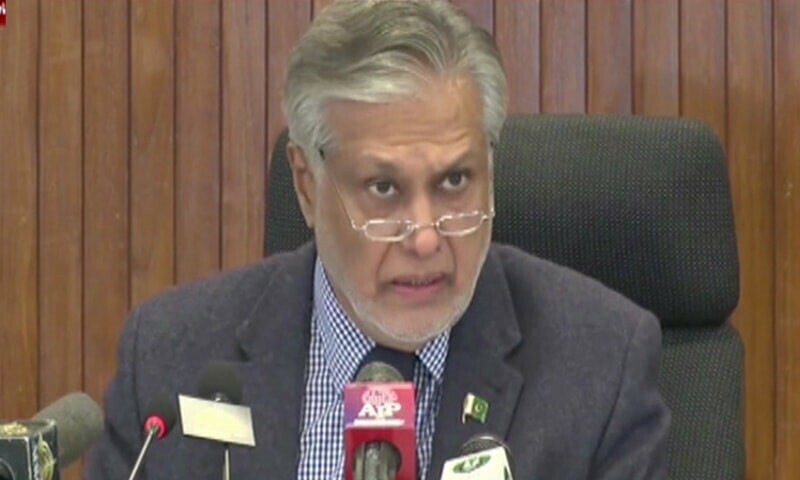 Islamabad: Finance Minister Ishaq Dar says that the PTI’s white paper on the state of the economy is “selective, misrepresented and devoid of economic context”.

The document was released a day earlier. It had analyzed the economic performance of the PML-N, PTI, and Pakistan Democratic Movement (PDM) governments from 2013 till now.

The released paper painted a bleak picture of affairs in Pakistan. It warned that hyperinflation, coupled with unemployment, could push the country towards “complete anarchy”.

Addressing a press conference in Islamabad, Dar said: “The PTI presentation was selective, misrepresented and economic indicators were misleading.”

The Federal Ministers of Planning and Development, Energy, Economic Affairs, Information flanked Minister of Finance. The finance minister said the comparisons made in the white paper were “incorrect and devoid of economic context”.

Dar said the the incumbent government inherited the economic situation from the previous regime. He said since April 2022 the economy remain “strongly influenced by the inherited legacy”.

He said that the document released by the PTI lacked context. It ignored the international economic situation, commodities super-cycle, the impact of the Russia-Ukraine war and catastrophic floods in the country.

“These realities should have been kept in mind for making a fair analysis,” he said.

Dar said the IMF had predicted that one-third of the world would be in serious economic trouble in 2023. And that Pakistan was “no exception”. He said the Fund had projected GDP growth at 2.7 per cent.

The finance minister categorically rejected the PTI’s claim of an increase in prices. The increase of100 to 200pc is “factually incorrect”.

Dar said the PTI’s claim of creating 5.5 million jobs during its government was also “incorrect”. “Official data showed that some 3.2m jobs were created from 2019 to 2022.”

Regarding the stalled IMF program, Dar said the 9th and 10th reviews would have to be combined. He also expressed confidence that the coalition government would complete the program with the IMF. And this had happened in the last PML-N government tenure.

The minister said it was that the federal government was working on keeping the prices of essential commodities in check. Regarding the rupee’s depreciation, Dar said all the major currencies in the world performed negatively against the US dollar.

He said illicit means of currency transfers and smuggling of foreign reserves were the weakening of the currency. And that law enforcing agencies are working on dismantling the network of smugglers.

Comparisons between PML-N and PTI tenures

Similarly, the trade deficit stood at Rs30.9bn in PML-N’s tenure while the PTI government left it at Rs39bn.

“I acknowledge the figures cited by the PTI [in the white paper], but its government left the current account deficit at Rs17.3bn”. He added that the PML-N government under the leadership of party supremo Nawaz Sharif also had to fulfil the country’s security requirements, fought wars against terrorists, and cope with loadshedding.

The finance minister said in the first five months of the current fiscal year, the current account deficit stood at $3.1bn against $7.2bn in the same period of the previous year, and would be $7bn at the fiscal year’s end.

As regards exports, he said, “The last PML-N government started its term with annual exports of $25.1bn and ended at $24.8bn in 2018. On the contrary, the exports during the first two years of the PTI government dipped and then rose to $32bn in its fourth year, and the main reason for enhanced exports was turf financing of Rs400bn by the government at 1pc markup rate.

“If we also give such financing of Rs1,000bn to the industrialists today, the export situation will improve considerably,” he added.

The minister said the GDP growth rate in the first year of the PML-N government was 4.05pc, which rose to 6.1pc in the last with an average growth of 4.7pc while the PTI regime’s four-year average growth was 3.5pc.

PTI Senator and former finance minister Shaukat Tareen said he had read the government’s rebuttal to the white paper. He said their blatantly distorted and misstated facts were amazing.

“We will share with the people of Pakistan these distortions soon,” he tweeted.

PTI leader Hammad Azhar also alleged that the finance minister was manipulating economic figures. He said the country was in need of “serious economic decision-making”.

In this article:Ishaq Dar, PTI White Paper on Economy