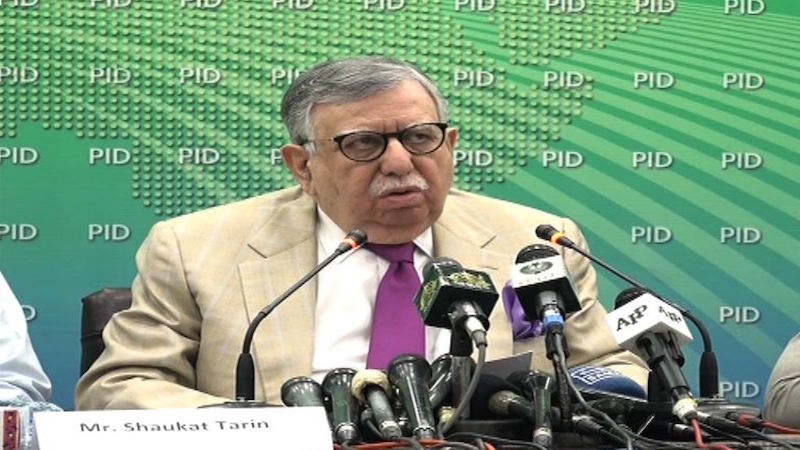 Addressing a news conference in Islamabad today, the finance minister said that the Federal Board of Revenue’s (FBR) system had been non-operational for the past 10 days.

He said that he would talk to the tax collection boy about the extension in September 30 deadline for filing the tax returns.

Speaking about the efforts to facilitate the vulnerable segments of the society, Shaukat Tarin said the government will start giving targeted subsidies on essential commodities from this month.

The targeted subsidy will be in the form of cash assistance, which will cover 35% to 40% of the population, said the finance minister.

Federal Finance said that the government will provide targeted subsidies on essential commodities, gas and electricity through the Ehsas program.

Addressing a press conference in Islamabad Tuesday, the finance minister said that in the past no attention was paid to the agriculture sector but the government was fixing prices from farmers to retailers. The government is eliminating the role of the middleman to ensure farmers get the right price for their produce.

The finance minister said that the government was trying to provide a maximum subsidy to people who were struggling. He predicted that the price of flour would come down in the next few days.

he said, adding that commodity warehouses, cold storage will be established in the country to facilitate the growers.

The finance minister vowed that the government will eliminate the role of the middle man and will ensure that the farmers get the due price of their products.

The finance minister said that wheat prices will fall in the coming days due to the government’s effective measures.

At the same time, he said that the prices of daily necessities in Pakistan are reasonable as compared prices in South Asia. Inflation was 12.68% in 2018 and is expected to remain at 8% this year, he added.

He then turned to dwell on some macro-economic indicators. According to Tarin, the government was forced to go to the IMF due to which, the rupee depreciated. Inflation rose due to higher policy rates and the rise in the value of the dollar from Rs104 to Rs166.

“The government has tried its level best not to fully pass on to the masses the impact of the international increase in the prices of commodities,” said Shaukat Tarin.

Talking about the hike in sugar prices, the finance minister said that the prices of the commodity increased by 48% in the international market but we only increased its price by 11%.

Similarly, the prices of crude oil and wheat were not enhanced as per the international market, he added.

Kamyab Pakistan Program will be launched this month in order to enable the weak segments of the society to earn their livelihoods, said the finance minister.

He said we are on the track to achieve 5% growth during the current fiscal year. This, he said, will also help reduce our debt to GDP ratio.

According to a report by Profit on Sunday, Pakistan and the IMF will start staff-level discussions for the release of the sixth tranche under the $6 billion Extended Fund Facility on September 29.

The Finance Minister said the government is also focusing on bolstering the agriculture productivity. In the medium to long term, commodity warehouses, cold storages and agri malls will be established with the aim to eliminate the role of middle man and ensure that the farmers get due price of their products. He said strategic reserves of major commodities are also being built in order to ensure smooth supplies in the market.

The Finance Minister said that the prices of wheat will see decline in the coming days.

Shaukat Tarin said the government has tried its level best not to fully pass on to the masses the impact of international increase in the prices of commodities. He pointed out that sugar prices increased by forty eight percent in the world market but we only creased its price by eleven percent. Palm oil saw an increase of fifty percent but we increased the price by thirty three to thirty five percent. Similarly the prices of crude oil and wheat were not enhanced as per the international market.

The Finance Minister said the government is also giving attention to enhance the incomes of the people to enhance their purchasing power.

Shaukat Tarin said that Kamyab Pakistan Program will be launched this month in order to enable the weak segments of the society earn their livelihoods.

Shaukat Tarin said that the results our growth strategy are visible and the revenue collection is increasing. He said we are on the track to achieve five percent growth during the current fiscal year. This, he said, will also help reduce our debt to GDP ratio.