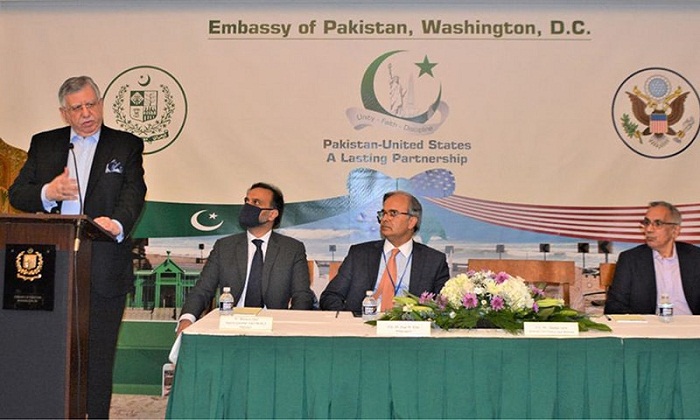 WASHINGTON: Pakistani Finance Minister Shaukat Tarin said the IMF officials are validating the economic data of Pakistan before approving $1 billion loan. He said that some members of the Pakistani team visiting the US would stay in Washington till Tuesday in a bid to finalise the resumption of the IMF loan programme.

Addressing a news conference at the Pakistan Embassy in Washington, finance minister Tarin said the finance secretary would stay in Washington for continuing the talks with the IMF while the governor of State Bank and he would be in New York and join the talks virtually.

The International Monetary Fund (IMF) had earlier said that it was holding open and constructive discussions with Pakistan on the 6th review of its financial package and stood ready to support the country in achieving its objectives of debt sustainability.

In July 2019, the IMF approved a 39-month arrangement under the Extended Fund Facility (EFF) for Pakistan for an amount of $6 billion to support Islamabad’s economic reform programme.

Mr Tarin said that in the next few days, Pakistan and the IMF would issue a joint statement, announcing the resumption of the loan facility. After the announcement, the IMF would release about a billion dollars to Pakistan, he added.

The minister said Pakistan had shared some statistics with the IMF on power and gas tariffs and tax collection.

“They said they are validating the numbers we shared with them and will get back to us,” he said. “We told them that we welcome the review.”

The minister said that this quarter, the government had collected Rs175 billion of additional value, “which have we shared with the IMF”.

Mr Tarin said that during the visit he also held meetings with US officials and Turkish minister. SBP Governor Reaz Baqir, who accompanied Mr Tarin, spoke about current account deficit.