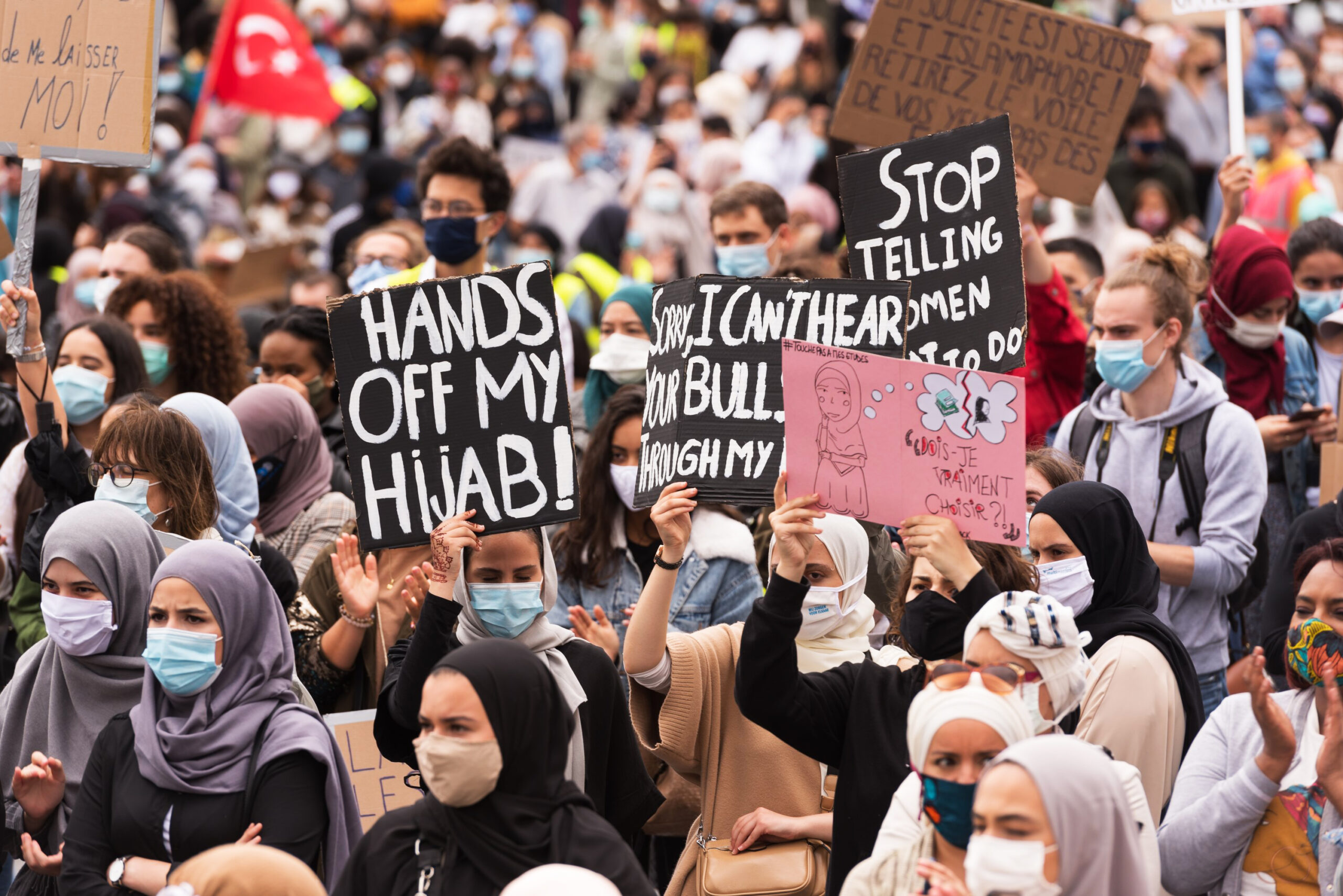 There is a common perception in the world that when Christian Nuns wear headscarves and Jews are having beards, they are following the spirit of their religions. However, when Muslims do these things to uphold their religious traditions, they are termed extremists and uncivilized, which shows hyporacy of the western world.

Recently, the European Union’s top court has once again triggered controversy over Hijab. An European court has given a decision in favour of the companies operating in Europe which allows them to forbid the wearing of visible symbols of religious or political belief, such as headscarves at the workplace.

The Luxembourg-based tribunal said in its ruling that courts in the bloc’s 27 member states should weigh up whether the ban corresponded to a “genuine need” on the part of the employer. They must also consider the rights and interests of the employee, including by taking into account national legislation on freedom of religion, it said.

“A prohibition on wearing any visible form of expression of political, philosophical or religious beliefs in the workplace may be justified by the employer’s need to present a neutral image towards customers or to prevent social disputes,” the court said.

However, that justification must correspond to a genuine need on the part of the employer and, in reconciling the rights and interests at issue, the national courts may take into account the specific context of their Member State and, in particular, more favorable national provisions on the protection of freedom of religion.

The verdict of the top European Court is related to the case that was brought to court by two working women in Germany who were suspended from their jobs after they started wearing hijab, a headscarf worn by many Muslim women who feel it is part of their religion.

Both Muslim women – a special need carer at a childcare centre in Hamburg run by a charitable association, and a cashier at the Mueller pharmacy chain.

They were told by their respective employer that this was not allowed, and were at different points either suspended, told to come to work without it or get a different job, court documents show.

Notably, the issue of the hijab has sparked controversy across Europe for years and underlined sharp divisions over integrating Muslims. In a 2017 ruling, the European Union court in Luxembourg had already said that companies may ban staff from wearing headscarves and other visible religious symbols under certain conditions. At the time, this had sparked a huge backlash among faith groups.

More than five million Muslims live in Germany, making them the largest religious minority community there. Headscarf bans for women at work have been a hotly contested issue in Germany for years, mostly with regard to aspiring teachers at state schools and trainee judges. This has not so far been a major theme in the campaign for this year’s legislative elections.

Elsewhere in Europe, courts have also had to look into where and how headscarves can sometimes be banned at work.

For example, France’s top court upheld in 2014 the dismissal of a Muslim daycare worker for wearing a headscarf at a private creche that demanded strict neutrality from employees. France, home to Europe’s largest Muslim minority, prohibited the wearing of Islamic headscarves in state schools in 2004.

However, Austria’s constitutional court has ruled that a law there banning girls aged up to 10 from wearing headscarves in schools was discriminatory.

In a recent statement, Amnesty said the new regulations planned under the law would lead to further discrimination against the country’s Muslim minority.

“This law would be a serious attack on rights and freedoms in France,” said Marco Perolini, Amnesty International’s Europe researcher.

Macron’s government says the law will tackle what the president has termed “Islamist separatism” and underscore the country’s secular system. But critics argue it breaches religious freedom and unfairly targets France’s Muslim minority, which at 5.7 million people is the largest in Europe.

The law does not specifically mention the word Islam, but French Muslims have for months protested against it, saying the measures single them out.

“Time and again we have seen the French authorities use the vague and ill-defined concept of ‘radicalisation’ or ‘radical Islam’ to justify the imposition of measures without valid grounds, which risks leading to discrimination in its application against Muslims and other minority groups,” Peroli- ni said. “This stigmatisation must end.”

Attack on rights and freedoms

In its current state, several aspects of the law raise concern for the protection of freedom of association and expression and the principle of non-discrimination in France, Amnesty said.

It cited several of its more than 50 articles as problematic – including Article 6, which states that any organisation that applies for a grant from the State or a local authority must sign a contract of “republican commitment”, and Article 8, which will hand further power to authorities in dissolving organisations.

republican commitment’ – a vaguely defined concept which is wide open to abuse and threatens the very freedoms of expression and association the French authorities claim to stand for,” said Peroli- ni, commenting on Article 6.

Elsewhere, the law aims to regulate homeschooling and foreign funding of religious organisations and crackdown on polygamy and doctors who issue so-called virginity certificates.

A group of lawyers, NGOs and religious bodies from 13 countries have submitted formal complaints to the United Nations Human Rights Council Office of the United Nations High Commissioner for Human Rights (OHCHR), calling for action against France’s “breadth of state abuse against Muslims” stretching back more than two decades. The coalition submitted its findings to the UN body on Monday, accusing France of violating “a number of basic rights that are protected in legislation that is ratified by Paris”.

It said successive governments since 1989 had “entrenched structural Islamophobia and discrimination against Muslims”. As examples, it cited recent “illegitimate and violent” raids of Muslim homes and organisations designed to “send a message”, French President Emmanuel Macron’s plan against what he calls “Islamist separatism”, an alleged backlash against Muslim communities in the wake of the September 11, 2001, attacks in the US, the 2004 ban on the hijab in public schools, the 2010 ban on the niqab in public spaces and moves in 2016 – later overturned – against the full-body swimsuit worn by some Muslim women.

It also said a 2017 counter-terrorism law, SILT – Strengthening Homeland Security and the Fight Against Terrorism, fuelled Islamophobia, alleging it mainly targeted Muslim families, individuals and community centres. The group urged the OHCHR to act in the wake of its complaints and ensure France upholds the Universal Declaration of Human Rights and International Covenant on Civil and Political Rights.

UK-based CAGE, which campaigns against the injustices of the “war on terror” and calls

for due process, and legal groups such as the South Africa-based Muslim Lawyers Association are also part of the group. Feroze Boda, of the Muslims Lawyers Association, said: “These policies are not only counter-productive, but they are open to abuse, and have been abused – while also being completely out of touch with reality.”

France First Country in Europe which imposed ban on Hijab

In Europe, France is the first country that has imposed a ban on Hijab in public places from April 2021. The hijab is a headscarf worn by many Muslim women and has been the subject of a decades-long feud in France. The French move comes as part of Paris’s push to introduce a so-called “anti-separatism” law which it says aims to bolster the country’s secular system, but critics have denounced, arguing it singles out the minority Muslim population.

While debating the legislation, senators approved an amendment to the bill calling for the “prohibition in the public space of any conspicuous religious sign by minors and of any dress or clothing which would signify inferiority of women over men”. A backlash to the amendment was swift, with some suggesting the rule amounted to a “law against Islam”.

“This is what happens when you normalize anti-Islamic and anti-Muslim hate speech, bias, discrimination, and hate crimes – Islamophobia written into law,” the post said. Amani al-Khatahtbeh, founder of Muslim Women’s Day and the website Muslim Girl, also weighed in on the controversy. Amnesty International last month warned the law posed a “serious attack on rights and freedoms in France” and called for “many problematic provisions” of the law to be scrapped or amended.