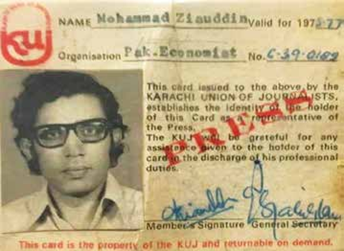 In the recent history of Pakistan media, it is worth examining the career of Muhammad Ziauddin, one of Pakistan’s most respected names in journalism.

While working for nearly sixty years at almost all the major newspapers of the country—The Muslim, The News, DAWN, The Express Tribune—Ziauddin sahib has managed the nearly impossible: to maintain a blemish-free record throughout despite skirmish- es with the high and mighty, including the once all-powerful General Pervez Musharraf.

Muhammad Ziauddin was born in 1938 in Madras (now Chennai). The family moved to Dhaka, East Pakistan by 1952 after tumultuous events of 1948. In 1958, when Ziauddin was studying for his BSc in Pharmacy at Dhaka University and coaching the cricket team, he got a chance to travel to Karachi for a camp. And so, in 1960, when he was 21 years old, Muhammad Ziauddin moved to Karachi.

After doing first job as medical representative, in 1963, he enroll in journalism at the University of Karachi. He took his first job in journalism as a cub reporter in PPI (then PPA) for a paltry sum of Rs75 a month in 1966. During his second year he had also worked as a campus reporter for daily Dawn.

He brought out an underground magazine called Voice of the Students, edited with Akhtar M Farooqi, who was also from the Journalism department.

He discontinue the publication when his English teacher Rehman sahib recognised the writing styles and warned to stop, otherwise…

Ziauddin then joined Pakistan’s only private news wire at the time, Pakistan Press Agency, which was later renamed Pakistan Press International. The salary was a paltry 75 rupees. He worked with Jawaid Bokhari, retired as in-charge editor of Dawn’s Economic and Business Review. Anwar Mansuri who retired as German news agency DPA’s chief in Pakistan and the late Ashfaq Bokhari.

Around 1970s, Journalists were already protesting the Press and Publications Ordinance (PPO) promulgated by Ayub Khan in 1963 and in the fight between newspaper owners and journalists, a number of professionals lost their jobs.

The PPO was a draconian law, could confiscate your printing press, close down the newspaper, send you to jail and throw away the key and there would be no recourse to the law.

As matters were in transition, Ziauddin moved from PPA to the weekly Pakistan Economist in 1974 (later the Pakistan and Gulf Economist) where Ibnul Hasan was Editor. It was at Pakistan Economist that Ziauddin interviewed the Khan of Kalat. “Physically a roly-poly figure, but intellectually a giant of a person, the Khan was exceptionally pleasant to converse with,” recalls Ziauddin. He dilated on his vision for Balochistan within an independent Pakistan. The people of Balochistan would have, with all their rich mineral endowments and a vast coastline of white sand, taken the country far on the road to prosperity. Had the centrist, colonial minded-ruling elite of Pakistan not drastically tinkered with the Khan’s vision of Balochistan in an independent Pakistan, perhaps the country would have averted most of the sociopolitical setbacks.

Ziauddin’s interview with minister of production Rafi Raza was quite different. After the interview on the ministry. Rafi Raza’s short but prophetic answer was: The two should come to some amicable understanding before the return of the 90,000 or so POWs, (a good number of them being Army personnel, both officers and rankers), being held by India at the time. The PM dismissed the Mengal government in Balochistan on some trumped-up charges of plotting secession. In protest, the NWFP coalition government led by CM Mufti Mahmood resigned, follow- ing which the country entered a highly unstable political phase that culminated in the ouster of the PPP government by the then COAS General Ziaul Haq, arrest and subsequent hanging of Bhutto and extended dictatorship that lasted eleven years.

In 1976, Ziauddin joined Morning News as an Assistant Editor on the invitation of the then Editor Sultan Ahmed, a difficult Editor, not to spare anyone for the slightest of editorial lapses. SR Ghauri replaces Sultan Ahmed in Zia’z era. Complaints were moved again Zia-Ud-Din on his pro-soviet and was about to be kicked out when, one day the NPT chairman came to see him. ‘The (NPT- National Press Trust) Chairman had come all the way from Lahore to fire a pro-Soviet Communist (Zia-ud-Din) lurking in his Trust and went back after meeting a rozedar!’, Ghauri told Zia-ud-Din.

In 1978, when General Ziaur Rehman lifted martial law from Bangladesh, Ziauddin wrote an editorial welcoming the move, but after the first salutary sentence, descended into an outpouring against dictatorship in general, which could easily be misinterpreted as being censorious of Pakistan’s regime and it was. Radio Pakistan read it and was heard in a huge way.

Ghauri sahib and Ziauddin both went on a month’s leave each. “Let us see what happens when we return!” he had said. That was the last meeting between the two men. Ghauri sahib resigned soon after and Ziauddin was offered a job at The Muslim, a newspaper being launched from Islamabad.

After almost twenty years in Karachi, Ziauddin moved to Islamabad where he worked under the legendary AT Chaudhry, Editor of The Muslim, in 1978. “He was a complete Editor,” recalls Ziaud- din. But the owner of the newspaper, Agha Murtaza Pooya, was a part-time politician with unconcealed ambitions. As the popularity of the newspaper grew rapidly under Chaudhry sahib’s leadership, so did Agha’s political ambitions and his interference in editorial decision-making.

The Muslim was launched at the height of Zia’s dictatorship. Editorially, AT did what the seniors at the newspaper saw as a tight-rope walk. Coverage of government policies would be critical but not confrontational.

First Ziauddin’s Bangladesh editorial, then his refusal to resign from the PFUJ and now this takeover. The information secretary was apoplectic. “A takeover and that too on the main thoroughfare of the capital!” The Muslim was located on main Aabpara Road. Rehman ordered the arrest of the entire editorial team. “By sheer luck I escaped arrest as I had gone to watch a movie with my wife,” says Ziauddin. “When I got back to the office, I saw that the police had taken over the premises. I was not allowed to enter and all my colleagues were missing.”

In 1983, Ziauddin won an APNS best investigative story award for his story exposing the conditions of IMF programmes. Pakistan had signed just before the US offered a five-year $3.02 billion and economic aid package in return for its help waging an American jihad against occupying Soviet troops in Afghanistan.

In 1982, Ziauddin joined Dawn’s Islamabad bureau to report on the economy beat. Editor Ahmad Ali Khan appeared to be in complete control without any political interference.

Zia tried to buy off newspaper owners by allowing them duty-free newsprint imports ‘strictly’ in accordance with their circulations & requirements. And it was a great crime when newspaper owners claimed highly exaggerated circulation numbers so they could import newsprint far in excess of their requirements so they could sell the surplus in the market at prices equal to those that carried the import duty. Overnight, newspaper owners big and small turned into tycoons. In order to justify their circulation numbers, many of them increased their pages and editions. The owners of Dawn too benefited and indeed, two highly innovative weekly editions were launched: The weekly ‘Economic & Business Review’ or EBR and ‘Books and Authors’.

Zia-ud-Din went to Lahore Bureau, but soon when Jang Group owner Mir Shakilur Rehman or MSR offered him the position of Editor of the Islamabad edition of The News, in 1991, following the departure of Dr Maleeha Lodhi as Ambassador to the US, Ziaud- din made the change. He soon realized that MSR, unlike the owners of Dawn, was acting like a super editor. MSR’s involvement continued to grow.

It was the end of the year 1993 when he received a call from Ahmad Ali Khan, asking him to rejoin Dawn as its Islamabad Bureau Chief. This he did and by 2001 the Islamabad edition of the paper was launched and Ziauddin became its first Resident Editor.

In 2006, Ziauddin was posted as Dawn’s correspondent in the UK where he stayed till 2009.

Ziauddin received a call from Bilal Lakhani, the young publish- er-to-be of The Express Tribune newspaper. But, he become Executive Editor and he agreed, taking up the position in 2009. Ziauddin’s exit from The Express Tribune came in 2014 after the Express Media group fought with the Jang Group after the Hamid Mir affair. He quietly wrote his resignation and sent it across. He posted a tweet as well on July 1, 2014.