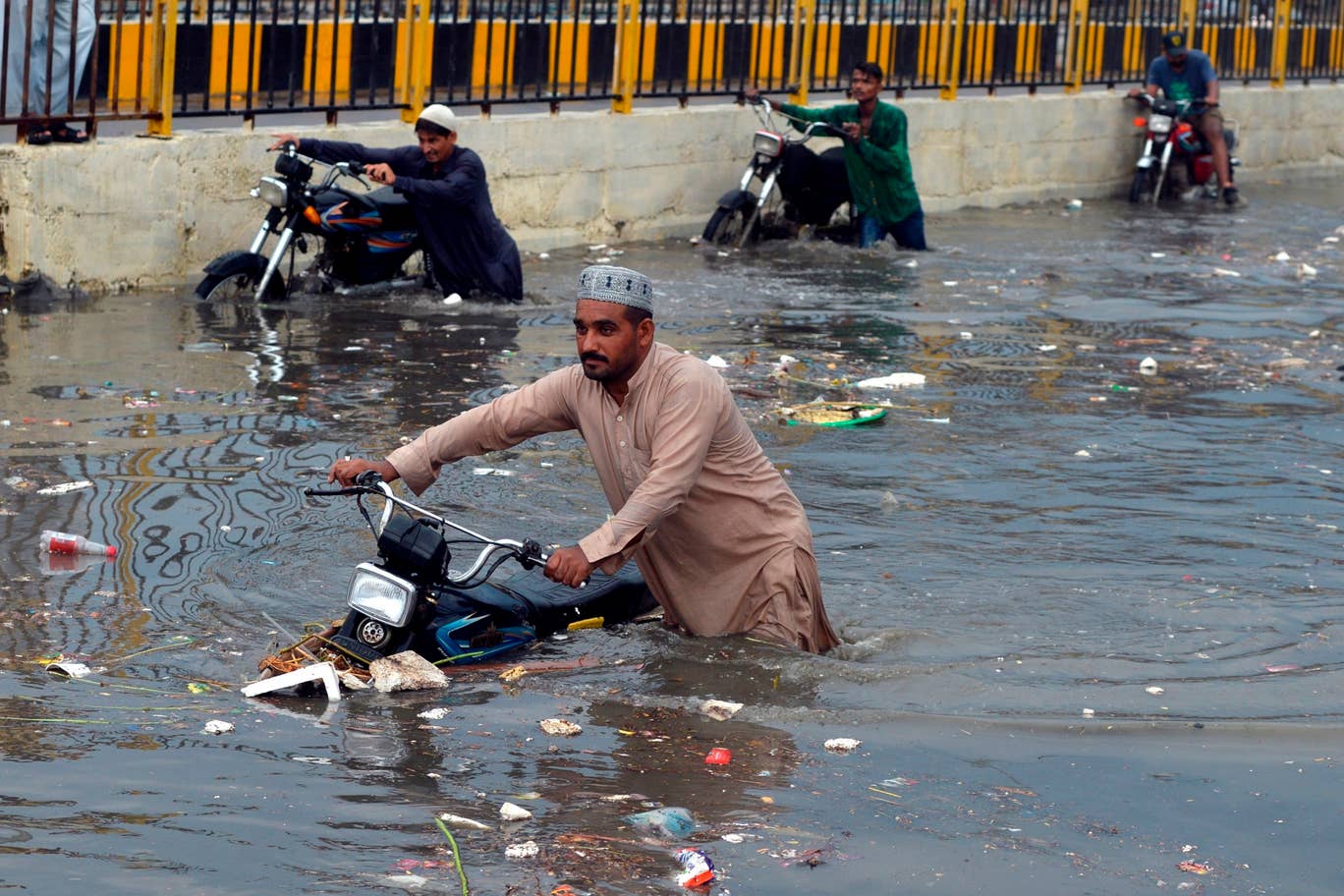 She stands by herself, disheveled and distraught, body half-submerged in the drifting water, sobbing and begging for help. It is obvious that floods arising from the heavy deluge have left her destitute and at the mercy of the elements. If there can be a face of the tragedy of Karachi, it is she. But she is far from being alone. Across Karachi, from Surjani Town to North Nazimabad to Clifton and DHA, the story is the same. Flooding, destruction of property, and loss of power. They say Karachi is the city of lights, the rains turned it into a dark wasteland.

How does one make sense of Karachi? The numbers boggle and bewilder; population estimated to be the same as Australia’s and more than half of Sindh’s, providing half the total tax collection of the Federal Board of Revenue and generating almost a quarter of Pakistan’s GDP. And yet, Karachi is ranked the fifth least livable city in the world and for a decade has been placed near the bottom. Its Pakistan’s commercial capital but its infrastructure is worse than that of Amroha, a small town in Uttar Pradesh in India. When its citizens get electricity, it comes from a utility company ranked worst by the World Bank Group among the companies operating in large cities of South Asia and the Asia Pacific.

It would not be so shocking if the city had been bombed in the war, suffered a calamitic tsunami or an earthquake, or was the site of frequent hurricanes and other natural disasters. It would also be understood if the city had always been a dysfunctional wasteland. But tragically, that is not the case. The first federal capital of Pakistan, Karachi until the 1980s was a livable city with a working infrastructure. The financial and industrial capital, of Pakistan, attracted people from all over the country and following the Afghan war, became host to the largest refugee population in the world. The population explosion and mass rural-to-urban migration led to unplanned growth and soon unscrupulous builders started constructing buildings on storm drains and on encroached land making the situation worse. Throw in the ineptitude of the MQM and PPP, the two parties that have ruled Karachi for most of the past three decades and one can easily see why the city has been known as among the least livable on the planet.

While there have been reams of paper and oceans of ink spent on documenting Karachi’s problems, nothing much has been done about it. The resourceful elite has risen above the problems, divorced from the city through their SUVs, private water supply, power generators, gated communities, and other amenities that enables a cocooned existence. Disfranchised people have neither the resources nor the time to fight for their rights and were mostly resigned to their fate. There was an unstable equilibrium that suited everyone, especially the politicians and city administrators. And then the heavens opened.

The metropolitan department has raised warnings for the monsoon and issued statements saying they expected massive rains. This time it was even beyond their or anyone else’s expectations. Records were broken, most single-day rain, most rain in a month, most rain in a season, and so forth. Karachi’s creaking infrastructure that had been held together almost by spit and rubber bands finally broke down. Homes were flooded and power was out, for days in some areas. People could not make it to workplaces, factories were shut and supply lines broke down. Internal movement of goods stopped and exporters were adversely affected. Yusra Zehra, a graduate of Habib University works for The Citizens Foundation and could not make it to her office for several days and Farah Zehra a school teacher at Habib Girls School was unable to conduct online classes because there were no internet services. Farah said,

“Online classes are hard as it is and with no power for 24 hours and no internet services how is one expected to continue? My students are also suffering and I have received dozens of messages from them regarding this terrible situation.”

Ali Syedain is a phlegmatic businessman and former corporate banker. On the night of August 27, he stepped out to buy diesel fuel for his generator which had been running for most of the day. Karachi Electric had cut power across the city and as people rushed to the buy fuel for generators, there was the inevitable diesel shortage.

“I dove around the water logged roads for a few hours until I finally found a petrol station that had some diesel. After standing in line for another hour I finally brought fuel. But I am lucky I can afford a generator and fuel; most people have no choice but to suffer”

he said. Later that same night, Ali stepped out for more supplies only for his car to get submerged in a hidden road depression, and last we spoke it’s still being fixed for water damage to the engine and interior.

Finally, the citizens had had enough and spoke out. However, due to the flooding in the affluent areas of DHA and Clifton, it was not the proletariat who can be easily ignored or the netizens who will vent on social media and then quieten down on the streets. The people protesting were the resourceful elite who were demanding their rights from Cantonment Board Clifton (CBC) and Defence Housing Authority (DHA) and not about to walk away without an answer. On Monday, August 31 residents of Clifton and DHA gathered outside the CBC’s office and demanded that the officeholders listen to their complaints and resolve their issues. There were demands of an audit of accounts to see where the duties collected from residents are being utilized and that they should be reimbursed for the damage to their homes which has happened because of their incompetent and mismanagement. A video of artist Shahid Rassam’s house went viral on social media and showed the interior of his DHA Phase 4 home flooded and furniture floating around. There were other horror stories and residents knew they will have to resort to extreme measures.

“I am not leaving without a commitment even if I have to resort to legal action,”

said Akbar Ahmed, who works in a brokerage house.

It was interesting that the residents had understood the concept of the cantonment and that their area does not fall in the purview of city authorities. Karachi’s administration is divided among the cantonment authorities, KMC which is dominated by the MQM-P and other agencies such as the Malir Development Authority, Karachi Development Authority, etc. which are independent of the KMC. There are other bodies such as the Sindh Solid Waste Management Board which is responsible for trash collection but does come under the Mayor of Karachi, the last one resigning during a press conference during which he had his usual complaint of his office being underbudgeted and lacking administrative powers.

As the usual blame game between the federal, provincial, and local government was being played out, Karachi continued being submerged. The citizens on the south side manage to finagle some weak commitments from CBC and DHA, the latter even bringing in a new CEO, but those in other parts of the city carried on the best they could. IBA graduate and business owner Hasan Mahmood lives in Federal B Area and had to move his family out of his house because of the rainwater which had flooded his basement. When I spoke to him on the phone, he had to shout over the noise of the pump which was removing the water.

“There’s five feet of water in my basement and I have lost precious books, photographs, and mementos. My academic degrees and certificates were all here and now I cannot find them. It’s unbelievable what the government has done to my city”,

The working professionals had a roof over their heads and resources to manage the catastrophe but what of those who live on a daily basis. Shakir Pervaiz sells vegetables at the corner of Tariq Road and lives in Korangi. For many days I did not see him at his usual spot and when I saw him, he looked haggard and lose.

“My son works in a pharmaceutical company in Korangi and could not go to work for a few days. He got a call to come otherwise he would be fired and when he stepped out his motorcycle broke down in the water. I have not been able to get supplies for a few days and even if I did, there is no way I could have made it here because of the broken roads and standing water. Only Allah can manage this city,”

The spell of rains ended on August 29 and the city has slowly limped back to what was its version of normalcy. There are still areas such as Naya Nazimabad, parts of DHA, and others that are still flooded and Karachi’s situation has been the lead story in media for more than two weeks. There has been a flurry of political activity, the Prime Minister has announced a development package of Rs. 1100 billion and KE has been fined and taken to task. The besieged citizens, resilient or just stubborn, are carrying on but skeptical of change. As Hoora Ali said,

“Talk is cheap and I cannot rely on promises. I am now reassessing my life in Karachi and if I can help it, I will be gone from the city by the time the next monsoon comes around.”

Seeing her damaged car and flooded home I can only numbly nod.